Brandon Moreno Thriving In The Present

As ever, Brandon Moreno is happy and relaxed.

Reclining in a t-shirt and sandals as he sits down with UFC.com, he seems to have settled right into the beach culture of Rio De Janeiro. In every way, he projects vibes the polar opposite of his intense and steely longtime nemesis: UFC flyweight champion Deiveson Figueiredo.

“Oh man, so the guy is very emotional. The guy says sometimes he's very angry with me or whatever,” he laughs. “But, to me, I'm so happy to have somebody like him to share this kind of legacy.”

“Legacy” is an appropriate choice of words. Regardless of the result of Saturday night’s UFC 283 co-main event, the two men will have written an unforgettable chapter of the UFC story. As to which character he sees himself in that story, Moreno is pretty clear.

“He acts like the villain of the history. And me, I'm just the guy who is smiling and enjoying everything. So that's nice. I'm so glad to be part of this history of the sport.”

If you’re just tuning in, the first three meetings between Moreno and Figueiredo are absolutely worth an hour or so of your time on UFC FIGHT PASS. Not only do they rank amongst the greatest flyweight battles in the promotion’s history, but some of the best overall MMA bouts of the past two-and-a-half years.

“Even before, I think our trilogy was awesome. I think the first three fights between us were the best ones in the division. Now this fourth one, it's just adding more legacy and more juice to the history of our rivalry.”

Their unprecedented tetraology will mark an unusual scenario where the fourth fight will serve as a tiebreaker for bragging rights and to determine the rightful owner of the 125-lb strap.

Their epic initial meeting ended in a draw, due at least in part to a point-deduction on the champion Figueiredo. Moreno captured the belt via third-round submission in their sophomore outing, only to have it reclaimed by the Brazilian at UFC 270 a year ago. An injury sustained by the champion made an immediate rebooking impossible, but it gave Moreno the time to capture the interim flyweight title when he beat Kai Kara-France in Dallas last July.

Still, for most of the past two-plus years, Moreno’s thoughts, preparations and mental real estate have been occupied by one man: Deiveson Figueiredo. Naturally, we had to ask: are you tired of thinking about this guy?

“Definitely the fight against Kai Kara-France helped in the mental part because, you know, new face, new gameplan…that helps a lot. So right now, I feel so fresh, man. I feel so happy. I feel so excited again. And it's amazing because I have the same good vibes as when I fought against him in the second one. I feel happy again. I feel excited. I'm ready to fight.”

When he says “happy” he doesn’t say it in some bloodthirsty manner. He doesn’t mean “happy to get paid” or “happy to kick some ass” or “happy to get this over with.” The noted LEGO enthusiast really just means happy, like a child who was just gifted an oil tanker full of chocolate. 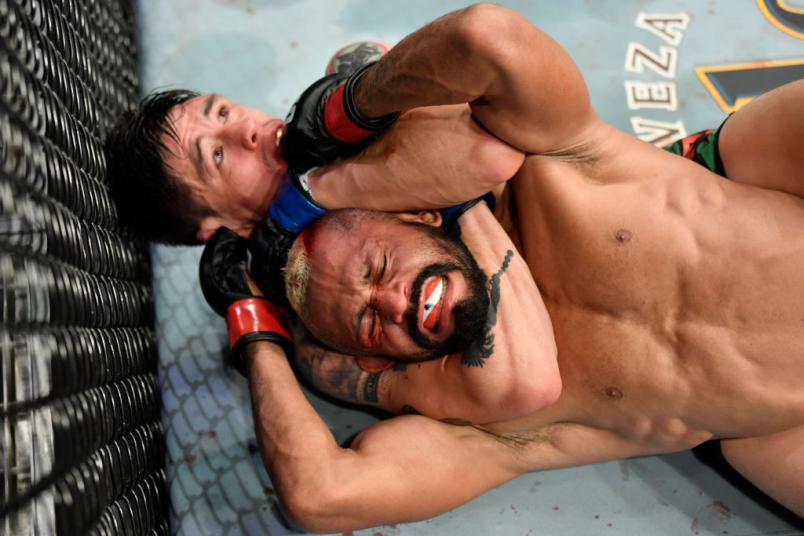 Brandon Moreno of Mexico secures a rear choke submission against Deiveson Figueiredo of Brazil in their UFC flyweight championship fight during the UFC 263 event at Gila River Arena on June 12, 2021 in Glendale, Arizona. (Photo by Jeff Bottari/Zuffa LLC)

Perhaps the other top-tier flyweights aren’t quite as happy as Moreno and fight fans have been as they wait patiently (and not-so patiently) for their shot at next. On this point, “The Assassin Baby” is sympathetic.

“Oh, guys, I'm sorry. This is kind of my fault because I obviously had the opportunity to finish this rivalry with Figgy. But at the same time, you know, it is what it is.

“Right now, I can see more real challengers, like, I don't know…Pantoja. Maybe Royval is coming back after a few losses, so I can see the future of the division now. But before that, the division was stuck by themselves.”

Still, he’s as eager for the next chapter as the rest of his peers.

“I promise, I just want to finish my business with Figgy and then move it forward very fast. I want to fight like two or three times at least (this year).”

Part four of the saga will come with a new wrinkle unseen in the previous three bouts: homefield advantage…for his opponent. Episodes 1-3 were fought on neutral sites in the United States, even if his opponent didn’t perceive it that way.

“Oh man, I'm so excited to fight in Brazil because Figgy was saying something like (Moreno is) always the local. I'm always fighting In Anaheim, in Dallas, in Arizona…cities where a lot of Mexicans live, right? So I understand the point. So now I'm here in Brazil. I'm here trying to not be the local guy.”

Moreno won’t be “the local guy” until the Tijuana native fights in Mexico again, but he seems thrilled nonetheless for the opportunity to play spoiler to the hometown hero.

“I'm very curious to see the reception of the people because I know I'm fighting against a Brazilian guy. But then, at the end of the day, I'm the same as I was then. I'm a normal guy trying to get some money for his family, okay? So I feel they will respect that, definitely.”

It might be here that Moreno’s sunny disposition teeters on irrational optimism, but we’ll know for sure when the cage door locks Saturday at Jeunesse Arena. Whoever the crowd is behind, the previous installments have shown that a game of inches will ensue.

“Figgy is still very dangerous. He showed me that in the third fight. I'm still thinking I won that fight, but it was a close one, right? So I need to be very careful of him. I need to put attention on my new gameplan. Fix the things I did wrong in the last one. And that's it.”

Win, lose or draw, it’s hard to imagine any outcome that will slow Moreno’s high-wattage smile for long. He knows already that he has made the most of his second chance. It was only 2019 when Moreno suddenly found himself no longer in the UFC while his entire division was on life support. In a relatively short span of time, he’s gone from almost forgotten to a beloved former champion and half of one of the great fight series of his generation.

An obvious question then is: what changed between now and then? Despite the difference in outcome, surprisingly the answer is: very little.

“A lot of people asked me that before and I wasn't sure about the answer. But now I think when I was in the in the worst part of my life, for example, when the UFC released me, I was always living in the present. I was not thinking on the future or past like, ‘oh, poor me.’ No, no. I was busy trying to fix my bad moment. I think one of the keys of my success: just live in the present.”