It’s a good thing Joie Jenkins wasn’t playing golf on that tape his teenage son Brandon found all those years ago. Otherwise, Brandon might have been teeing up the ball in Augusta last weekend instead of getting ready for a prizefight on Saturday against Drakkar Klose in Las Vegas.

But there was the elder Jenkins, throwing hands in a bare-knuckle fight with none other than David “Tank” Abbott. And his son was fascinated.

“Along with those VHS tapes, there was UFC 1, 2, 3, 4, and that's kind of how I found it,” said Brandon. “And that's when I started training. I was like, ‘Cool, I want to be a badass like my dad.’ But I also wanted to see how far I could go. Could I make it all the way to the pinnacle?”

At 18, Jenkins was young enough to dream and old enough to know better when it came to fighting for a living. But he didn’t care about the sacrifices; he was all-in.

He’s not kidding. Whether mixed martial arts, boxing, or kickboxing, the Iowa native has competed in it to the tune of nearly 80 fights. That’s a lot of face punching.

“I feel like a young dinosaur,” said Jenkins. “This will be my 79th fight between amateur, pro, boxing, pro kickboxing. There's not a lot I haven't seen yet. I've only fought a couple black belts, but I've seen most of it, to be honest.”

And all along, Jenkins has had his dad in his mind as the initial reason for all of this.

“I was always trying to live up to my dad's toughness,” he said. “He raised five of us kids by himself for years. He was a single dad working three jobs, so I was always like, 'What would my dad do?' He's a tough SOB, so I'm gonna try to be as good as he is.”

Jenkins has earned his stripes, not just as a tough guy, but as a legit member of the UFC roster, which puts him among the best 155-pound fighters in the world. That doesn’t mean it’s been an easy road. Far from it, but he never stopped pushing from the time he first put on the gloves and battled through an amateur career that was longer than most.

“I wasn't that great,” he said when asked why he put in 31 fights on the amateur circuit. “I was one of those gym hoppers. I went from dojo to dojo, and you go to too many places you spread yourself kind of thin. So until I went to a real gym at American Top Team, I wasn't really ready to go to that next level. I was just fighting twice a month all over Florida.” 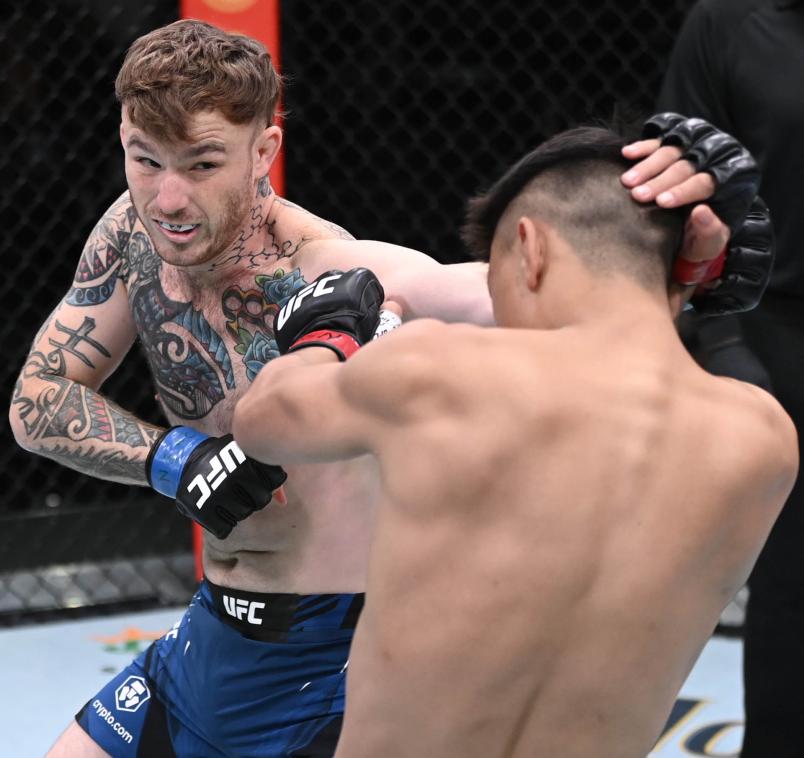 “I was all right,” Jenkins laughs. “I was fighting anyone, anywhere, anytime. The rules in Florida, they had shin pads and eight-ounce gloves so you really didn't take a lot of damage, so you could fight more often.”

Eventually, Jenkins decided that the time was right to make that move to the pros.

“I won four out of my last five amateur when I got to the right gym, and I was like, 'All right, I'm done doing this for free; I gotta get paid for it,'” he said. “And that's when I decided to do it. I had already fought everyone, and it was weird because I moved up north to Minnesota after I went pro and away from everybody in Florida because in Florida, there were more amateur fights than pro promotions. So I had to move away from all that to get a fresh start or I was just gonna get fed right back into the same crop of guys that I came up with.”

Jenkins started getting paid for his face punching in 2013, making his way through the regional scene and losing some but winning most. He eventually found his way to Las Vegas to work with the Syndicate MMA crew, and the fight before he scored a flying knee knockout of Jacob Kilburn in a PFL fight that went viral last August, he even broke a losing streak.

“I hadn't had any good results with my dad in the crowd,” he said. “I was like 0-3 with him in the crowd. (Laughs) And when I fought for the (Caged Aggression) title that got me into the PFL, I had him ringside. He drove like 20 hours to get there. So I got to win and bring him up in the cage. It was a hard fight, but it was the happiest moment of my life. Then we went to Florida, where he lives, and I got him tickets to the PFL fight and he saw me win that one, so he's a happy papa, for sure.”

Following the win over Kilburn, he was told by his manager Jason House to get back into the gym because he could get a call for a fight, possibly from the UFC, later in the year.

He went to the gym on that next Monday, working with fellow UFC lightweight Jordan Leavitt. Monday was fine, Tuesday was exhausting since it was sparring day, and on Wednesday, he wrestled with Leavitt.

Jenkins did perk up when Leavitt asked him if he wanted to grab a post-training snack at In-N-Out Burger. Well, it wasn’t really a snack.

“Two double doubles and a milkshake,” Jenkins laughs. “I don't have anything coming up, I just know I'm gonna be in the UFC later that year.”

“I get home and Jason calls me.”

“Can you make weight this weekend,” asked House.

“I've been in the gym for three days; I think,” Jenkins replied.

He did it, weighing in at 155.5 pounds for a September 18 bout with Rong Zhu, who ironically tipped the scales at 158 pounds, forfeiting 20 percent of his purse to Jenkins.

That was a good start to the weekend, but it ended in a third-round stoppage loss that didn’t sit too well with Jenkins, who hit the big 3-0 twelve days after his UFC debut.

“I was talking to my coach (John Wood) about it, and I was more embarrassed than anything,” said Jenkins. “I just got really tired and my legs were just rubber. It was a hard weight cut and in the first round I threw out my back, so it was just a lot of things all at once, plus the UFC jitters.”

“That's what happens when you cut almost 20 pounds in two days,” Wood responded. “We're in now. Let's just look forward to the next one.”

That’s what Jenkins is going to do, along with saving the trip to In-N-Out for after the fight. As for the future past Saturday night? Assume that it’s going to involve face punching.

“Now I'm checking off lists,” he said. “I used to get bullied a lot at school, so I used to do it to learn how to fight like my dad. Then I did it to prove to everybody that I'm tough. But now I'm doing it for me, and I still got some things I need to check off the list. I want a bonus, I want to win by guillotine, I want to fight overseas - there are things I still want to do. I got all these crazy knockouts and finishes, and it would be nice to get a cool submission and flip the table a little bit. But I love this. I love the war of attrition; I love to see how far you can push yourself mentally and physically.”