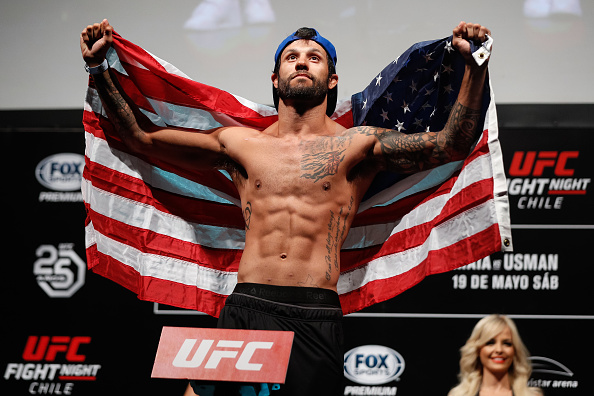 Brandon Davis wasn’t exactly looking for a fight this weekend, but when he found out that Yair Rodriguez had to pull out of his UFC 228 bout against Zabit Magomedsharipov, he figured he might as well get into one.

“Somebody said on Twitter, ‘Get Brandon Davis, Jason Knight or Shane Burgos this fight; they all need one. And I said, ‘You know I'm down,’ and I retweeted it.”

That’s all it took to get the ball rolling, but as Davis waited to find out whether he was going to get to face the Dagestan sensation in Dallas, he still had plans to stick to, and that involved a trip to New Orleans to pick up a Harley-Davidson motorcycle.

“Me and my buddy Tyler had just went to New Orleans to buy Harleys and we rode ‘em back,” Davis said. “And right when I got back, I got a call from Alan (Belcher). And Alan never calls me; he always texts me. So I knew it.”

That entire sequence, from thought to action to successful conclusion, captures the essence of Brandon Davis. In a world where people talk about living life to the fullest while sitting on the couch, Davis actually goes out and does it. Sure, he had a new bike to ride, but with a possible fight on the line, most would have decided to take a bus or train back home and save the Harley for another day. Not Davis, who even had the degree of difficulty amped up thanks to the weather.

“It was like a monsoon,” he laughed. “There were cars pulled over on the side of the road, and every other car was going 20, but my buddy had to be back by four, so we never stopped.”

Davis is still going, a couple sleeps away from fighting Magomedsharipov on 11 days’ notice.

“It's the ideal opponent because I want to fight somebody that's gonna strike with me,” he said. “As far as the 11 days’ notice, that's not ideal because you're not in as good a shape as you could be if you had a full camp. But yeah, he's unpredictable and he's gonna change up what he does anyway, so we're not gonna train for him; we're gonna train for what I do. Of course we'll look at some of the things he does, but we're gonna focus on what I do and making the weight.”

This isn’t the first late notice rodeo for the 28-year-old from Mississippi. After losing his UFC debut to Kyle Bochniak at UFC 220 on January 20, he took a February bout with Steven Peterson on 10 days’ notice, and like this time around with Magomedsharipov, he didn’t blink an eye.

“I literally got hit 30 times in that fight (with Bochniak) and I remember feeling two of them,” he recalled. “It wasn't bad at all. And I was still in shape, so why not? And then Steven Peterson was coming to strike too and I knew that, and that's my favorite kind of fight and that's what people want to see. That's why we got Fight of the Night.”

Davis fell under the .500 mark in the UFC with a May loss to Enrique Barzola, but if he was looking for a gimme to get back in the win column, Zabit isn’t that easy mark, and Davis is not the type of fighter who ever wants a gimme. That may hurt his record at times, but it also cements his reputation as a fan’s fighter and a fighter’s fighter. Not everyone can claim that, and while it’s a tough route to take, he wouldn’t go any other way.

“I know exactly why other people don't go that route,” Davis said. “I feel like there's benefits to both - they want to keep a good record and try not to lose and make sure they stay in the UFC. I don't want to leave the UFC either and I don't plan on losing this fight. I could lose it because Zabit's a beast, there's no doubt about that, but he can definitely lose this fight as well. I'm just gonna fight whoever they give me, and if they're offering me a top guy, I'm not gonna turn it down.”

Davis has been that way since his pro debut in 2014, and he’s not about to stop now. And if other featherweights are steering clear of Magomedsharipov, Davis approaches his career the way he fights – with continuous forward motion.

“I want to be the best, so eventually, if I was winning fights, I'd have to fight him anyway, so why not take a shortcut,” he said. “The dude's a beast, but he's human too. And I usually can't get somebody to strike with me and I feel like he'll stand in there and strike with me a little bit. I still feel that once I land some strikes, he's still gonna try and take me down, but he'll strike with me for a little while and I don't get that too often, so it makes me happy.”

Just like he’s one of the few who would make a motorcycle trip in the driving rain with a fight on the line, he’s also one of the few who finds 15 minutes in a cage with Zabit Magomedsharipov something to smile about. But hey, that’s the Brandon Davis way.

“Anything to get my adrenaline up, I promise you, I'm doing it.”