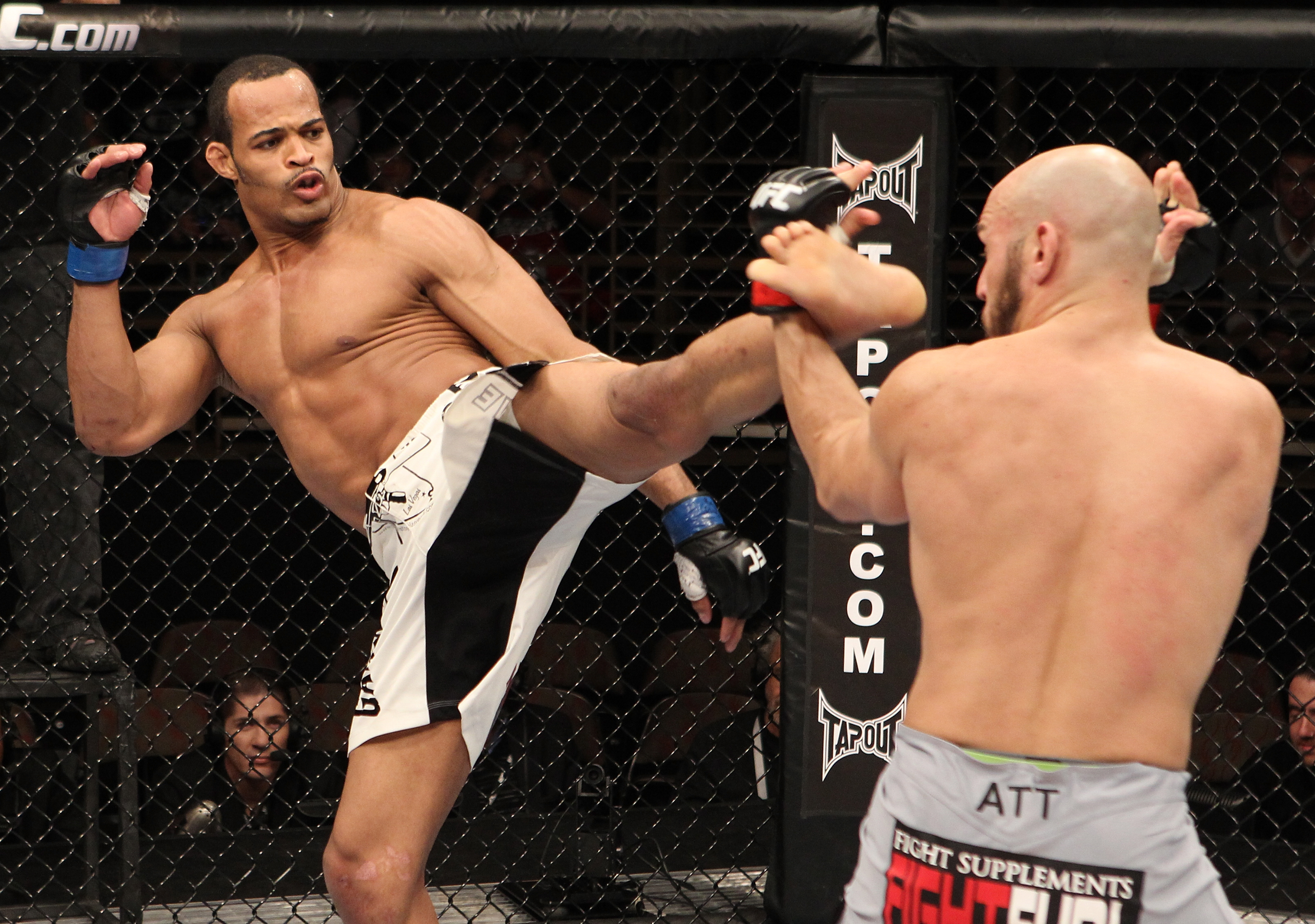 Facing off against a crushing leg lock specialist like Rousimar Palhares is fraught with risk, but it’s a cakewalk compared to UFC fighter David Branch’s previous job. The gregarious New Yorker endured more than four years as an iron worker, widely regarded as one of America’s most dangerous and deadliest professions.

“It’s hard as hell, man. I worked on some of the highest buildings in New York City, walking beams,” said the 29-year-old Branch, who lives in the same rough Brownsville, New York, neighborhood that produced boxing icon “Iron” Mike Tyson. “You’ve got to climb, grind and haul heavy materials and boxes up and down stairs. It’s a very difficult job.”

Every work day – following a night of intense MMA practices -- Branch would rise at 5 a.m., and usually climb atop a towering steel beam by 7:30 a.m. He might be situated 30 stories or higher in the sky.

“I would sit on top of a building and look around at all of New York City,” he said. “I’d say to myself, ‘There’s got to be a better way. This is not me.’”

He kept toiling, even after a fellow iron worker casually leaned over to cough, then plunged from the 24th floor to his death.

“The day before we were joking around at lunch time,” Branch said. “The next day I was picking his body up and putting it on a gurney.”

A year after his friend’s death, Branch quit his job and turned to pro fighting full-time. A Brazilian jiu-jitsu black belt under Renzo Gracie, Branch has fashioned an impressive 8-1 record, including a 2-1 mark in the UFC. Decision victories over Rich Attonito and Tomasz Drwal have put the 185-pounder on the map, but Thursday’s UFC on Versus matchup marks a big leap in competition. In fact, Branch conceded that his first reaction, upon being offered Palhares (20-3) as a potential opponent, touched a nerve of doubt inside him.

“I was scared as s---,” he said with a laugh. “I’m serious. Nah, I was actually nervous. He’s very tough, but I’ve never turned down a fight and I never will. I just have to step my game up. I’m grateful the UFC has given me a guy that is very dangerous and has a good name because now I really get to see what I’m made of.”

Thickening the plot, on paper at least, is that Branch may for the first time in his career be pitted against a foe with superior Brazilian jiu-jitsu, meaning that he might have to rely on something other than his greatest strength to pull out a win. Working daily with renowned BJJ instructor John Danaher, Branch has been drilling heel hook and leg lock escapes until he’s almost blue in the face. He’s also been tightening up his guillotine and Kimura defenses, figuring those maneuvers will come natural to his bulldog-built opponent.

“A heel hook is a very dangerous move but it is escapable,” Branch said. “A lot of times when he (Palhares) has injured guys they just kind of sat there. He grapples at a frantic pace and it can be very frightening when a guy like him grabs your legs. I can see why a lot of guys tap so quick because he’s going to rip their leg off. But you have to relax and do a proper escape. You can’t just stay there and panic because then your leg is going to snap.”

Branch did not concede Palhares as the better grappler, but noted that his strategy against every opponent is to test them in the weakest part of their game, which, in Palhares’ case, would be the standup realm. Branch is brother to Sechew Powell, a top junior middleweight boxing contender.

“I can’t box with my brother,” Branch said. “He’s too fast, too accurate. I do take pointers from him … I haven’t really showed too much of my standup, but it’s definitely coming. The guy that fought Rich Attonito doesn’t even exist anymore; I’m a completely different guy. He’s gone. Every time I go in there it will be a different guy. So my scouting report would be train you’re a—off if you’re fighting David Branch.”

If he’s not talking MMA, Branch can speak for hours on end about comic books, counting The Hulk, X Men and Spiderman among his all-time favorites.

“I’ve been collecting since I was a kid. I’m a comic book nerd. I’ve had at least 3,000 comic books,” he said. “If I could possess the powers of any comic book characters … I would definitely be Superman without the weakness of Kryptonite. I would be cunning like Batman and possess the resourcefulness of The Incredible Hulk. He’s not that smart of a guy when he’s not Dr. Banner, and he’s in the Hulk’s body, but he always figures out a way to beat somebody.”