Brad Tavares: A Secret No Longer

"I’m on a four fight win streak now, with a win over Larkin, it has to
propel me into the top ten, and if not, at least a crack at somebody in
the top ten." - Brad Tavares 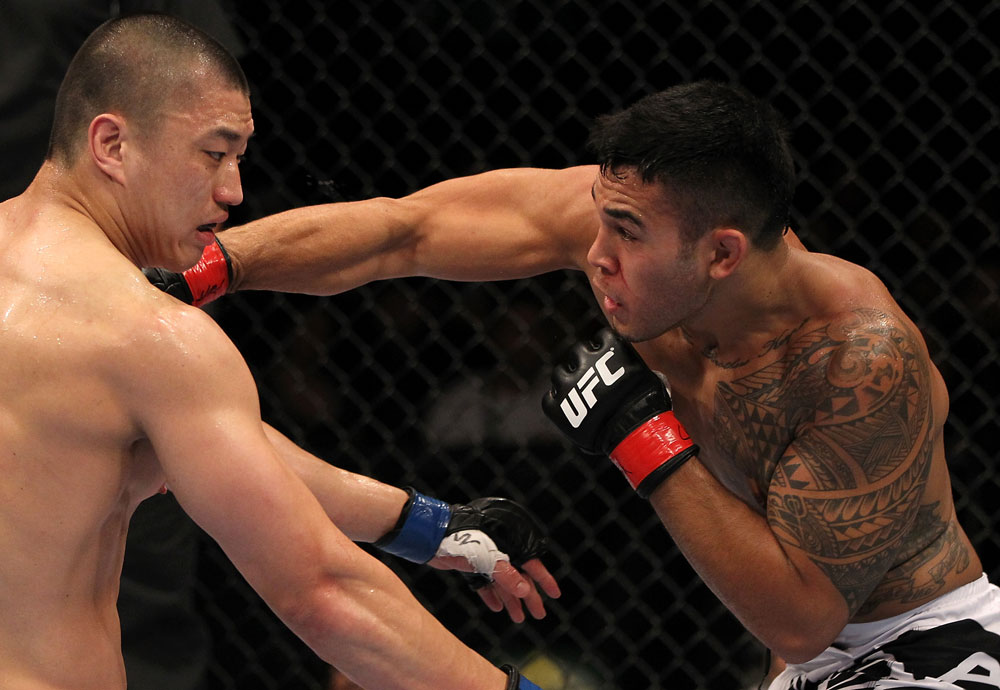 When it comes to Brad Tavares, let’s get the important stuff out of the way first. Yes, he still fights for the UFC. In fact, he’s in the UFC Fight Night co-main event slot this Wednesday against Lorenz Larkin. But that’s the stuff you can deal with when you’re a soft-spoken, all-business fighter like Tavares. Sometimes you just operate under the radar.

“It’s funny, a lot of people still ask me if I’m still with the UFC and stuff like that,” said Tavares, whose under the radar status (which is likely to change in a couple days) hasn’t stopped him from putting together a four fight winning streak in the Octagon. “I’ve been fighting, I’ve been winning, but it is what it is. Unfortunately I haven’t got the fights won in the way I like with the finishes, but I’m happy with the victories I’ve had. I watched the fights and I don’t think any of them were boring. I’ve had many people – fighters, fans – say that they enjoyed the fights a lot, and besides a finish, that’s all you can really ask for.”

He’s right, and consecutive decision wins over Dongi Yang, Tom Watson, Riki Fukuda, and Bubba McDaniel have put the Hawaiian on the verge of the middleweight top ten, even if he’s not making a lot of noise with his mouth or by way of some spectacular finishes.

“I try to let my fighting do the talking,” said Tavares, whose last finish was a 2011 knockout of Phil Baroni at UFC 125. “There’s nobody in this division I don’t think I can beat. I know people put a lot of emphasis on finishing fights and stuff, and hey, every time I go in there I want to finish a fight. I don’t want to go in there and win a decision. If I could get in there, touch gloves, and with the first punch knock somebody out, I’m happy. That’s 14 minutes less I have to work, so why wouldn’t I want that? I’m a simple guy, I’m happy with the victory, I believe I’m still young in this sport, I’m slowly coming up, and I’m gonna keep fighting, keep winning, and no matter what they won’t be able to deny me.”

Yet despite not making magazine covers or having 800 interviews plastered over the internet, people are paying attention to the 26-year-old. More importantly, the right people are paying attention, hence his co-main event status this week against Larkin, a former Strikeforce standout who wasn’t too pleased with the off-TV placement of his bout against Chris Camozzi last November. His response? An exciting back-and-forth slugfest that got him bumped up for his match with Tavares. And yeah, this one has all the makings of a Fight of the Night.

“I’m not one to lay and pray or wall and stall,” said Tavares. “I’m there to trade and make it exciting, and Larkin is that exact same type of fighter. So there’s no way that I can see this fight being boring or anything close to that. The styles that we both possess, it’s going to make for a fun fight and I think that the fans will be pleased with it. I think that’s why they put us in the spot that we’re in, in the co-main. If it wasn’t for two ranked middleweights (Luke Rockhold and Costas Philippou) being in the main event, they’d probably put us in the main event.”

Regardless of placement, a five fight UFC winning streak is nothing to overlook, and that’s where Tavares will be on Thursday morning if he turns back Larkin. And while he knows a top ten spot isn’t guaranteed with a win, he should at least be in the conversation at 185 pounds, with another win certainly putting him within striking range of a title shot.

“I’m on a four fight win streak now, with a win over Larkin, it has to propel me into the top ten, and if not, at least a crack at somebody in the top ten,” he said. “And then once I beat him, then another guy, and I’ve got to be right there in title contention.”

Just saying it, you can hear the excitement level in Tavares’ voice go up, and since he entered the Octagon in 2010 after his stint on season 11 of The Ultimate Fighter, that belt is what he’s been chasing. To know a shot at it could only be a few wins away, that’s some heady stuff for any fighter, but not something he can’t let overwhelm him. Not yet, and especially not now.

“It means everything,” he said. “That’s the end game in this, that’s the goal. The Holy Grail is to have that gold strap around your waist. But I’m not gonna go looking past Larkin. He’s way too dangerous an opponent for me to do that. I respect the guy, I enjoy watching him fight, and I know he’s gonna bring it. So right now, first and foremost, that’s what I’m focused on.”