"Hawaii is my home, those are my roots, and I’ll never forget that." - Brad Tavares 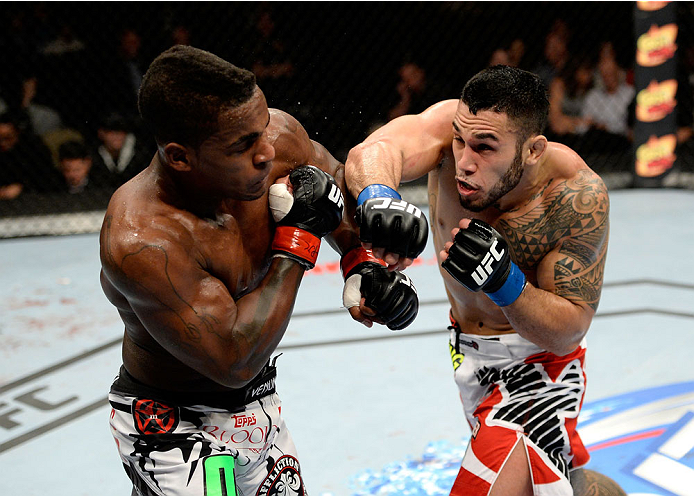 Years of living in Las Vegas have not covered up Brad Tavares’ Hawaiian roots. He’s proud of that fact, and though he doesn’t beat his chest about it, the little things that come out when he talks about the fight game remind you just where this UFC middleweight comes from.

Just ask him about his April loss to Yoel Romero, his first since July of 2011.

“You definitely need to go in and look at what you did wrong and fix those things,” Tavares said of the decision defeat to the Cuban Olympian that snapped a five-fight winning streak. “I looked at the fight and even as the fight was going on and immediately after it, I knew I made a lot of little mistakes. And I’m not taking anything away from Yoel; he’s a very talented fighter, and he beat me that night – he was the better man – but I honestly feel like I allowed him to look a lot better than I should have. I still know in my heart that I can beat this guy; I just made too many mistakes, he capitalized on it, and he had a very good game plan. I went back to the gym, and my coaches and I, we fixed a lot of things.”

Nothing out of the ordinary there, but when asked if his nationally-televised main card bout against Tim Boetsch on this Saturday’s UFC Fight Night event in Bangor, Maine is not just an opportunity to get back in the win column but also make people forget about the Romero fight, the Hawaiian comes out of the Kailua native.

“I’m not going to forget about Romero,” Tavares said. “I really like the guy, but it’s one of those things. I know I can beat the guy, and down the road we’ll run into each other again.”

If you haven’t talked to or watched a Hawaiian fighter, that fighting spirit is unique to natives of the 50th state, and it’s what makes them so compelling to watch in the Octagon. It’s not personal, it’s not a bad blood thing; it’s just the love of the scrap, of being competitive and always wanting to erase a loss not by selective memory, but with a win. And being around the bright lights of Vegas has not dulled that spirit in Tavares.

“You never forget where you came from,” he said. “Hawaii is my home, those are my roots, and I’ll never forget that. Even though I am in Vegas and training in Vegas, half the year I probably spend back at home with my friends and my family, doing what I love and seeing the things I love and going to the places that I love. That spirit doesn’t leave you just because you left your home. That’s something I grew up with, it’s part of who I am, and it’s something I’ll carry with me to my last day.”

That doesn’t mean he spends he spends his days obsessing over the Romero fight. Sure, he wants to get that one back, but in the meantime, there’s other business to tend to, mainly Boetsch, who also wants to return to the win column after a recent 1-3 skid.

“He’s a tremendously tough fighter,” Tavares said of “The Barbarian.” “He’s pretty well-rounded and he’s known for having power and being a real, strong aggressive wrestler-grinder type of fighter. I’ve seen him strike with guys in the past and I’ve seen him knock guys out, so I’ve got my hands full with him here. Yeah, he’s been on a little bit of a slope as far as the win column goes, but if you look prior to this, he was on the rise. Sometimes it’s other circumstances. You never know really what’s going on with a fighter. He might have personal things going on, he might be battling injuries that no one knows about, so you never know. But as always in all my fights, I’m expecting the best out of him and I think he’ll come in the best shape and be the best version of himself.”

Boetsch’s best is usually the worst case scenario for his opponents, but Tavares doesn’t mind that. In fact, he embraces it because when the fight’s over, if he emerges victorious, his opponent will have no excuses. The 26-year-old isn’t even concerned about being the bad guy as he travels to Maine to fight Boetsch in his home state.

“I wouldn’t say that I necessarily like being the bad guy,” he laughs. “But it’s whatever to me. I wouldn’t say I like it, but I don’t mind it.”

He shouldn’t, considering that he’s usually making that trip into his opponent’s backyard on fight night.

“It’s nothing new to me,” Tavares said. “The past few years I’ve been going into enemy territory, so to speak, and I’ve been fighting the hometown heroes or the guys from there. I went to England and fought Tom Watson, I went to Japan and fought Riki Fukuda, and for my last fight I went into Florida, which is the new home of Yoel Romero and there’s a lot of Cuban influence there and he’s a Cuban Olympian.”

He beat Watson, beat Fukuda, and was the first to make Romero go the distance, so history is in his corner. But Tavares doesn’t put stock in such things because all that matters is the fight ahead. Or as fellow Hawaiian BJ Penn put it so well, he wants to “just scrap.”

“I just want to go out there, put on an awesome performance, get back in the win column, and move forward.”