Brad Tavares: Chasing His Dream around the World

"Fighting in Japan is always something I’ve wanted to do and I’m glad I get to do it on the biggest stage in the world in the UFC." - Brad Tavares 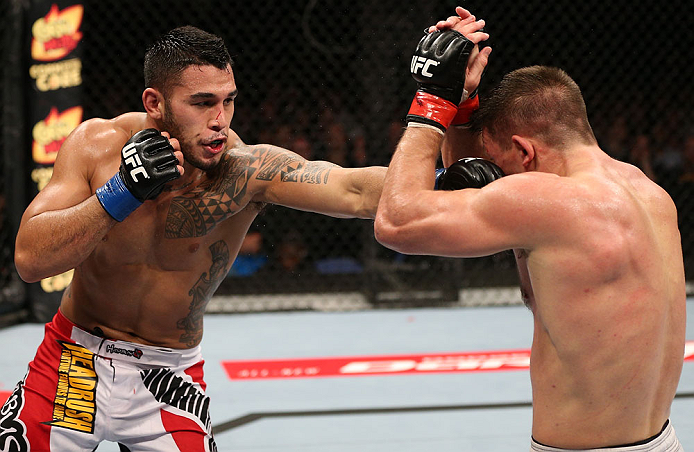 As a kid growing up on the Hawaiian island of Kailua, Brad Tavares dreamed of one day seeing the world. The ambition to do so was never in short supply, but the idea of traveling the globe and the means to bring this goal to fruition, at times appeared to be as distant as the sun setting across the western horizon.

In many cases, leaving the small island paradise is a door which never opens.  And while Tavares may be Hawaiian to the bone, there was a world and a sport beyond the shores that were waiting for him.

At just 23 years old, Tavares was selected to participate in the 11th season of The Ultimate Fighter. While the reality show was the Xtreme Couture-product’s introduction to the UFC fan base, the two years which have followed have been the most rewarding. In his five showings inside the Octagon, Tavares has emerged victorious in all but one affair, showcasing an ever-evolving skill set in the process.

Working under mentor Ray Sefo has allowed Tavares to add unique elements to an already strong striking game. The 25-year-old’s standup attack has always been the foundation of his success, but with a mind for detail and a blue collar work ethic, Tavares has added elements of speed and power, making his greatest attribute all the more dangerous.

The commitment to honing his craft has allowed Tavares to collect back-to-back wins, and he will be looking to keep the momentum rolling when he steps into the cage this weekend with Riki Fukuda at UFC on FUEL TV 8 in Tokyo, Japan.

For Tavares, competing in the “Land of the Rising Sun” will be another dream realized. For a kid who has made his way through the world based on his ability to stay on the grind, the fires of motivation are stoked heading into his showdown with Fukuda in Japan.

“Honestly…growing up, Japan was a place I always wanted to go,” Tavares said. “I’m not much of a person who wants to fight in crazy places, but Japan is definitely one of the places I’ve always wanted to fight in. I grew up watching PRIDE and K-1. I’ve seen those crowds and the type of shows they’ve put on. It has always intrigued me. Fighting in Japan is always something I’ve wanted to do and I’m glad I get to do it on the biggest stage in the world in the UFC.

“I’m always trying to please the fans and put on a fun fight. I’m looking to showcase my striking and go for the finish. If the opportunity arises, I’m going to take that finish wherever I can get it. I’m going to try to knock him out, but if it goes to the ground, I’ll try to submit him there. I want to get one of these bonuses and put on a great fight for the Japanese fans. I want to win these fans over forever. That’s what they say about the Japanese fans. You put on a good show for them and you have fans for life. That’s what I’m going to do for them.”

While striking may be the source of talent that sparked Tavares’s career as a mixed martial artist, training at Xtreme Couture in Las Vegas has paid dividends in other areas. The Las Vegas gym is well known for housing some of the best wrestlers in MMA, in addition to a revolving door of top-level grapplers aspiring to cut their teeth in a new venue. The constant grind has served to sharpen the TUF alum’s wrestling skills and they will come in handy against Fukuda.

The Japanese fighter uses a wrestling-heavy attack, and training at the American Kickboxing Academy will only serve to strengthen Fukuda’s skills. While Tavares expects the 32-year-ol to be looking to take the fight to the canvas, he is prepared to handle anything Fukuda brings his way.

“[Fukuda] likes to grind and wrestle but he doesn’t really possess that strong, Division I-type wrestling,” Tavares said. “I’m not taking anything away from him because he is a good fighter, but he doesn’t bring that powerful style of wrestling. He strikes to get to a single and tries to put guys on the mat, but I’m confident in my takedown defense and that I’ll be able to stuff him and stop his takedowns. I’ve seen in his past fights, when that does happen, he is no stranger to brawling. If he wants to do that, it is all the better for me. A standup battle is exactly what I want.

“That being said, this is the UFC where the best of the best fight. Anything can happen. I’m not expecting only one attack from him, and I’ve taken all aspects of the fight into consideration. If he does take me to the mat, I’ve been working heavily on my jiu-jitsu and wrestling games. I’ll be ready for wherever the fight goes. Obviously I’d like to keep the fight on the feet, but if it doesn’t go that way, I’ll get to show a different side of my game.”

“I never wrestled in high school, college, or any of those things,” Tavares continued. “But the team I started out with, wrestling was one of our foundations. We saw it early on that wrestling can dictate where the fight goes and it’s something we worked on constantly. Striking is where I excel and the most fun part of fighting for me. That is what a lot of people see from me, but I would say I have a pretty strong wrestling game as well.

“On occasion we’ve had college wrestlers come by the gym, and I do very well against them. Recently Martin Kampmann brought in a wrestler who had just competed in the Olympics and I was able to do pretty well against him in straight-up wrestling. Those things are confidence boosters. People probably won’t see a (Jon) Fitch from me, where I take my opponent down and grind them, but I do posses solid offensive and defensive wrestling skills.”

With the bout against Fukuda quickly approaching, the goals Tavares has set for himself are coming within reach. Often times, young fighters are looking to grab the lion’s share of opportunity as quick as it comes, but an elevated sense of maturity has Tavares willing to take his journey through mixed martial arts one step at a time.

He understands victory is the catalyst which makes all things possible in the realm of combat sports. By defeating Fukuda on Saturday night in Japan, the next step will become available, and Tavares is ready to hit the next tier of the middleweight division at full speed.

“I want to keep the ride going,” Tavares said. “I definitely want to be in the Top 10 of this middleweight division and a win over Fukuda will get me closer to that goal. I don’t think it will quite get me into the Top 10, but it will definitely put me in a position to fight the guys who are there. I want to be on another good show, especially for the Japanese fans, and come home with the ‘W’”.

“2013 is the perfect time for me to make my move up the ladder. A bunch of the guys who were in contention fell out recently. The opportunity is there, and with a good win over Fukuda, I can get a bigger name on a higher stage. I definitely think the division is wide open and I’m looking to make my run.”