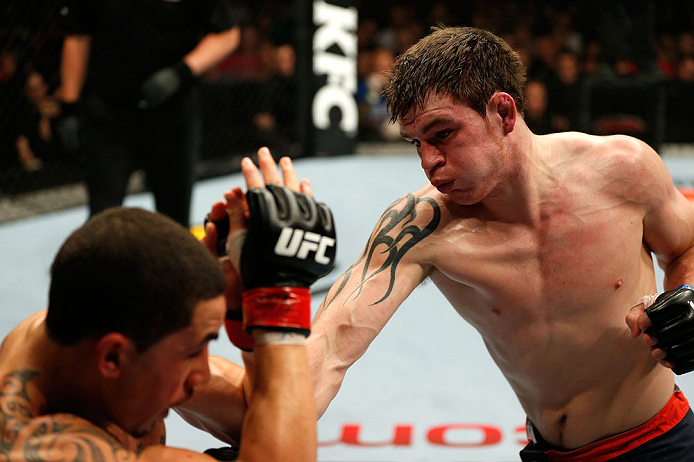 Only 18 years old and searching for a career path, Brad Scott was at a fork in the road. He tried many odd jobs and nothing seemed to fit his personality. Subsequently, the thought of joining the Royal Marines became a very viable option.

“When I tried joining the Royal Marines, I didn’t know what I was getting myself into,” he said. “I wasn’t fit or athletic when I was young. I literally went onto Google and typed in the hardest sports to get into that involved fitness. Two things came up and that was Olympic wrestling and mixed martial arts. I decided to try the latter and joined Dragon’s Lair and the rest was history.”

Dragon’s Lair was an up and coming MMA facility and Scott was entering a world that he wasn’t accustomed to. But he continued to push through the training and decided MMA was his career.

“When I first started training the Marines told me to run, run, and run every single day. With the MMA training I was doing everything from bag punching to rolling on the mats and wrestling. It was a lot more intense than what the Marines were looking for. They finally told me that I wasn’t fast enough to join the ranks and it was a blessing in disguise.”

Brad continued his training and become a very successful amateur fighter throughout Europe. Then, The Ultimate Fighter: The Smashes came around and he jumped at the chance to join the reality show.

“The Ultimate Fighter is always a show new fighters want to get on, because that is the fastest way to get to the UFC,” said Scott, who made it to the finals before losing to Robert Whittaker last December. “I was young at the time and knew that I couldn’t play the biggest sports in Europe (football / soccer). Joining “Smashes” was a great opportunity to show my skills and who I am as a person in front of millions of people. I learned that I had to change my attitude after the show and display some professionalism.”

Even though the show gave him that outlet to show his true talent and form, there was a decision to be had. During the filming, he was in the welterweight division and he has now moved up to the middleweight class for his upcoming fight.  The change isn’t something that was unexpected.

“Going up to the next weight class was always my plan,” he said. “I started at middleweight in my earlier fights, and once I heard I can cut down the night before it was pretty easy. I walked around at 205 lbs. anyways, so it wasn’t a big deal for me cutting down for the show. I just followed my diet and now I’m really into focusing on being very lean in the middleweight class.”

And while the training was there and the skills continued to grow, Brad Scott didn’t have one thing that many fighters possessed, and that was a nickname.

“My nickname was something that came out of the blue actually,” Scott laughed. “There was a Bear on a holiday TV show one day and somebody goes why not Bradley Bear? I said sure, because honestly I don’t care what people call me, because it doesn’t bother me one bit.”

The “Bear” steps into the Octagon in Manchester, England this weekend, which is a homecoming of sorts for the Melksham product. But with his opponent Michael Kuiper only a two hour flight across the water from the Netherlands away, it doesn’t seem like a great deal of home field advantage.