UFC Lightweight Brad Riddell Has Been Battle Tested Both Inside And Out Of The Octagon In 2021, Now Primed To Take On His Biggest Test Yet In Rafael Fiziev
By McKenzie Pavacich, on Twitter @mpavacich_ • Dec. 3, 2021

We won’t sugarcoat it — Brad Riddell hasn’t had an easy 2021. He’s been challenged by various obstacles ranging from difficult training circumstances to fight cancellations to mourning the loss of a close friend and teammate, but now he finally has a challenge he’s looking forward to in Rafael Fiziev.

“I see him as my equal. I haven’t fought someone that I’ve really come across that I feel matches me in every way,” Riddell said in a fight week interview with UFC.com ahead of UFC Fight Night: Font vs Aldo.

Don't Miss Riddell In The Co-Main Event Saturday On ESPN+

“He’s sort of my doppelganger, in a way,” he added, laughing. “I’ve always felt like I’ve had the edge over everyone, especially in striking, and I think I’ve shown that in all my fights, but this one is going to be a good test.” 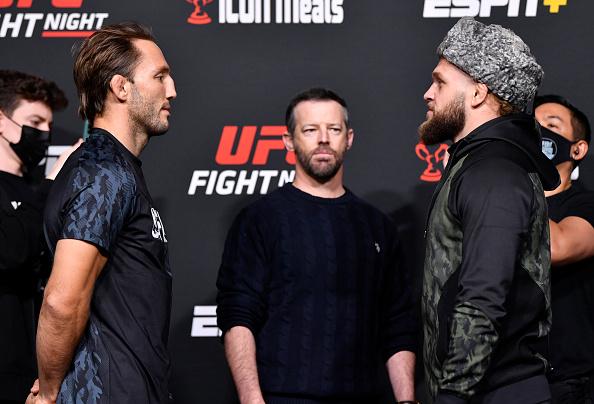 Opponents Brad Riddell of New Zealand and Rafael Fiziev of Kyrgyzstan face off during the UFC Fight Night weigh-in at UFC APEX on December 03, 2021 in Las Vegas, Nevada. (Photo by Chris Unger/Zuffa LLC)

While the narrative that’s been pushed this week focuses on the time Riddell and Fiziev spent together in Thailand, “Quake” made it clear that while he respects the man he used to share the mats with, he doesn’t let their relationship get in the way of the task at hand.

“That was a very, very long time ago so I think it’s irrelevant,” the 28-year-old said. “Five years ago, we were young men. A lot has changed since then, we’ve gotten a lot better, we’ve pretty much spent five years apart. That’s more time than we spent training together. I know a lot of people like to talk about it, but I don’t think it plays too much of a part. It’s just a job.

“It is a little odd because in other sports you might compete against your friends physically, you know like basketball or rugby or something, but you’re not intentionally trying to hurt them, you’re just trying to win. But obviously, in our profession, you have to intentionally try to hurt your friend, so that’s a bit weird to get around at the beginning, but you just need to look at it as competition and you just need to see if you’re better.”

On paper, Saturday’s co-main event may seem like a simple scrap between neighbors in the lightweight rankings, but in reality, it has the potential to be a technical striking showdown between two standup brawlers who both have extensive professional careers in other striking-heavy martial arts.

Between Riddell’s more than 70 professional kickboxing matches and Fiziev’s 30-plus professional Muay Thai fights, the two prospects both heading into their fifth fights under the UFC banner are anything but green — something Riddell believes gives them both an edge as they rise in the lightweight ranks.

“It’s like time under tension, as it’s very hard to replicate an actual fight. In kickboxing, you can rack up fights a lot quicker than in MMA, just because of the size of the gloves and the length of the rounds and stuff like that. So, it just gives you a huge background of experience,” the New Zealand native said.

“A lot of MMA fighters that just start MMA unfortunately don’t quite get that. The game is a lot more dangerous, more risky, and you seem to get a lot bigger injuries so you get more stand down time, so I think that’s where it favors us, it just built us this huge knowledge of wealth and experience.”

While Riddell believes they both should take up spots in the lightweight Top 5, only one will rise this weekend, and the City Kickboxing team member knows a win over Fiziev will set him up nicely for a run up the division.

"It's not the rankings, it's the caliber of the person you're beating."

Brad Riddell (@BradQuakeRiddel) believes a win over Rafael Fiziev at #UFCVegas44 will be impressive because of how talented his former training partner is 🔊⬆️ pic.twitter.com/jjFsKNl3gL

“It’s not about the rankings; it’s the caliber of the person you’re beating,” Riddell said. “He’s skilled enough and good enough to be in the Top five, easily. I know a lot of people would not want to fight him and didn’t want to fight him. So beating him is just another statement, another big notch on the belt, as I think he’s probably the best striker in the lightweight division. I consider him and myself to have the most experience in it. So, I would pick him as one of the hardest fights in this division.”

As friends turn foes on Saturday for 15 minutes or less, it’s likely the two top-notch strikers who combine for six performance bonuses in eight UFC fights will be vying for another bonus-worthy brawl.