Brad Riddell Is A Different Beast

To say the past two years were rough on Brad Riddell would be an understatement. The death of a close friend, a frustrating quarantine situation in New Zealand and, last December, his first UFC loss, all took their toll. 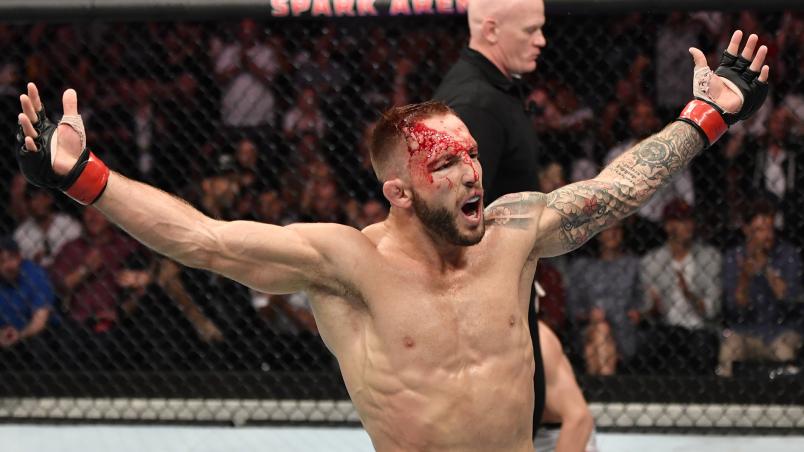 Brad Riddell of New Zealand reacts after the conclusion of his lightweight bout against Magomed Mustafaev during the UFC Fight Night event at Spark Arena on February 23, 2020 in Auckland, New Zealand. (Photo by Jeff Bottari/Zuffa LLC)

Happily for the 30-year-old lightweight, he now has the opportunity to get things back on track against American Jalin Turner at UFC 276. However, even that matchup took a little longer to happen than he would’ve liked.

“If you’re ranked around 15, the people above you don’t want to fight you,” explains Riddell, who currently sits in the 14th spot. “Trying to convince them is nearly impossible. In the end, I just said, give me any opponent. They gave me Jalin Turner.

“Jalin’s got what he wished for – he thinks he will move into the rankings. But something else is going to happen.”

Turner has certainly been garnering his fair share of attention. Unusually tall for the division at 6'3”, “The Tarantula” has been victorious in his past four UFC outings and boasts a 100 percent finish rate. Riddell is respectful without being overawed.

“He’s a good opponent,” says Riddell. “He’s on a great streak, and he’s unique with that height at lightweight. But what’s also unique is I’m about the only guy in this weight class who has fought people taller and heavier and won.

“I don’t think he’s ready for the Top 15 or to fight me. I’ve been to hell and back in MMA and the UFC. I’m a different beast.”

Riddell also notes that being based at Auckland’s famed City Kickboxing gym gives him plenty of tall, rangy fighters with whom to prepare, including the likes of Dan Hooker and middleweight champion Israel Adesanya.

"He's unique in this weight class, but I'm the guy that's supposed to fight him."

Another factor which may be on Riddell’s side is that, while waiting for his next opponent, he actually stopped training to recharge his batteries for the first time in many years, stretching back to before he was a pro kickboxer.

“I’d never really had a break,” he admits. “So, I took a month off and spent it with the family. We travelled around the country in a campervan [motorhome]. It was a real battle for me not to train every day. I did some spearfishing and diving in different places around New Zealand. I’m getting better at finding that balance in life.”

“I have the same hunger to compete [as I always did], because this is new competition,” insists Riddell. “I also get paid well, and I get to live a life that a lot of people never do. I have all the motivation I need right now.”

Steve Jobs once said that you can tell a lot about a person by their heroes. It makes sense, then, to learn that the Kiwi is a lifelong fan of boxing legend Roberto “Hands of Stone” Durán, the definition of a born fighter.

“I love Roberto. He’s my favorite boxer of all-time and always will be. He was like a technical street fighter. I love that aggression. He didn’t give a s**t. He’d fight anybody, threw heat the whole fight. He was born for it.” 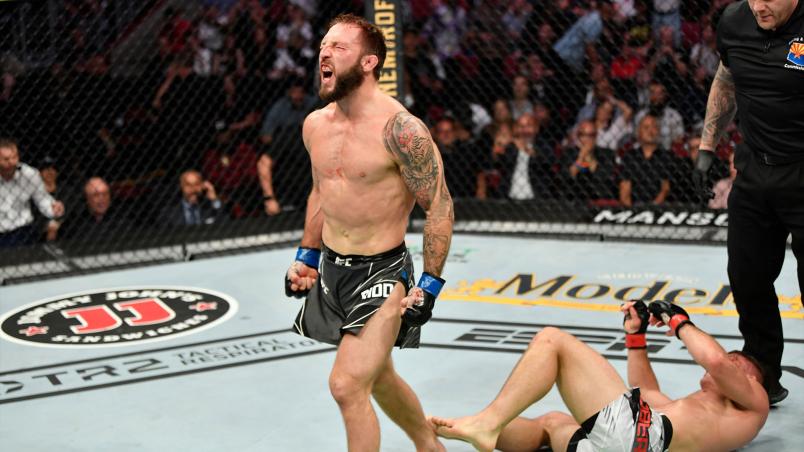 Brad Riddell of New Zealand reacts after the conclusion of his lightweight fight against Drew Dober during the UFC 263 event at Gila River Arena on June 12, 2021 in Glendale, Arizona. (Photo by Jeff Bottari/Zuffa LLC)

Like Durán, Riddell is obsessed with competition – which makes watching UFC fights from his couch a difficult task. “I get itchy,” confesses the 155er. “I miss the sport. I feel like I’m falling behind if I’m not doing it myself.”

One thing Riddell doesn’t get, though, is pre-fight nerves. He’s been in the game too long to waste energy worrying at that point.

“I’m very confident in my skill-set,” he says. “I do get nervous about other things, like my career and stuff, but not the actual fight. It’s never in my head that an opponent is better than me. Once that cage door closes, everything else is shut out, all of the crazy voices. After the ref says, ‘Are you ready?’, I’m just ready.”

Before his loss to Rafael Fiziev back in December, Riddell was on a seven-fight win streak. A victory against Jalin Turner at UFC 276 would restore that momentum and help put some of the frustrations of the past two years behind him. The opportunity is there – and so is the hunger.

“I’m going to win this weekend,” declares Riddell. “If it’s 15 minutes of hell or 15 seconds of glory, I can do both. Winning is all that matters.”