Brad Pickett: Winning is the Only Option 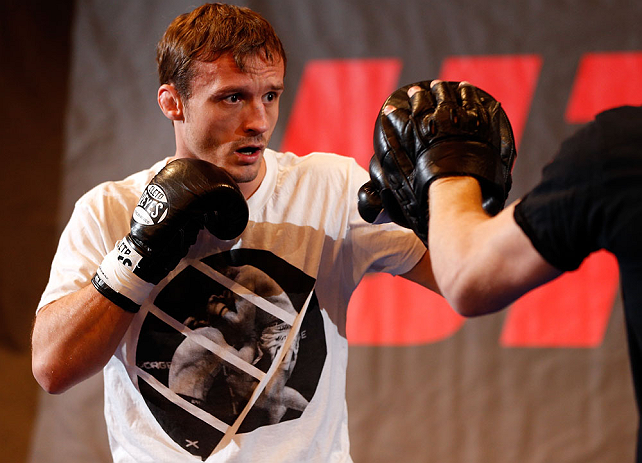 When Brad Pickett lived up to his nickname of “One Punch” and dispatched Yves Jabouin last September, it was his first knockout win since 2008, and it got people talking. Where did all this power come from all of a sudden? Had he changed striking coaches or his training routine?

Well, I’ve got a different take on this sudden burst of power from the London native, and I think it all comes down to the 400-page monster of  a book Pickett carries from city to city over the course of his travels:

Pickett laughs when asked about his quest to get all the fighters in the book to autograph it, but all joking aside, it’s nice to see a professional athlete who is still a fan of the sport he competes in, and Pickett certainly fits the bill there.

“What people don’t realize sometimes is that they see you in the game, playing the sport, but that we came from that thing and we’re actually really big fans of the sport as well,” said Pickett, who estimates that his autograph collection in the UFC Encyclopedia (which was released in October of 2011) is already in the hundreds. He’s not done yet though.

“There’s a lot of tough guys,” he admits. “I did get the “King of the Streets” (Marco Ruas), which is a good one. The one I really want to get is Keith Hackney.”

So in the interest of helping out a fellow fan, if you know where Mr. Hackney is, tweet Pickett @One_Punch.

One place Hackney isn’t likely to be this weekend is Stockholm, Sweden, but that’s where Pickett will be, looking to put on another memorable performance against fellow bantamweight contender Mike Easton.

“He (Easton) is a tough opponent, like they all are in the UFC,” he said. “I like the matchup and I think it should be quite an interesting battle. I like the matchup because he comes forward, I come forward, I don’t get put on the back foot and it’s gonna be hard for him to put me there. So if he comes forward as well, we’re gonna clash, and we have no other means than to fight, which makes for an exciting fight.”

If anyone has cornered the blueprint for exciting fights, it’s the 34-year-old Pickett, who pulled in post-fight awards in two of his four WEC fights, and in three of his four UFC bouts. The only Octagon battle that didn’t see Pickett grab an extra check was his most recent one, a three round split decision loss to Eddie Wineland. And even that wasn’t a snoozer, though you’ll have a hard time convincing Pickett of that.

“I was disappointed because I didn’t think that fight was exciting at all, and I always pride myself on being an exciting fighter,” he said. “I thought that was a really boring fight.”

Well, Pickett’s standards are higher than most, but all aesthetic value aside, what went wrong that night as he saw a two fight winning streak snapped?

“It was just the style matchup,” he said. “He (Wineland) has a unique style and it was hard to get a glove on him. He had very good foot movement, he wasn’t easy to hit, and that’s where I was gonna get outpointed a lot. It was really frustrating for me, and it was a fight that I personally thought I was going to win. I knew it was a close fight, but I do think he won, even though it was a split decision, so I’m not unhappy about that. But no disrespect to him, I thought he was gonna come and fight a lot more and try and mix it up a little bit more. But he fought really well and stayed on the run, and he didn’t let me hit him that much. I did hit him a couple times, but not super hard. I didn’t connect with him how I thought I would.”

Subsequently, what was expected to be a tooth and nail brawl turned into something other than that, as Wineland turned the tables on Pickett, who wasn’t able to get his standup or ground game in gear.

The loss, while not causing fans to abandon him, did come at an inopportune time for the Brit, especially seeing how Wineland will now be fighting Renan Barao for the interim bantamweight title in June. It’s a position he’s been in before, and having gone through it more than once doesn’t make it any easier to deal with.

“I’m not even thinking about that,” he said when asked about the 135-pound title picture. “I’ve been there and thereabouts for so long. If I won my last fight maybe I would have had a title shot. If I’d have beat Barao I probably would have had a title shot. If I beat Scott Jorgensen back in the WEC, I would have been there. I’ve been in the mix for a long time, but at the moment now it’s just a pipe dream unless I string a few wins together.”

That starts with Easton on Saturday, and while he’s not thinking that the unemployment line will be beckoning should he lose, if he wants to get where he’s always wanted to go, he needs to get his hand raised.

“I’d like to think my job’s safe, but at the end of the day I’m in it not just to be in the UFC; I’m in it to try and win and be something,” said Pickett. “So for me, I want to win, and the more you win the more money you’re gonna earn and the longer your career can go. At the moment I’m 34, so my career is not really at the beginning, it’s more towards the end, so I need to keep winning to stay in a job and stay relevant and try to achieve what other people have done within the sport.”