Brad Pickett: Not Letting Go of His Title Dreams 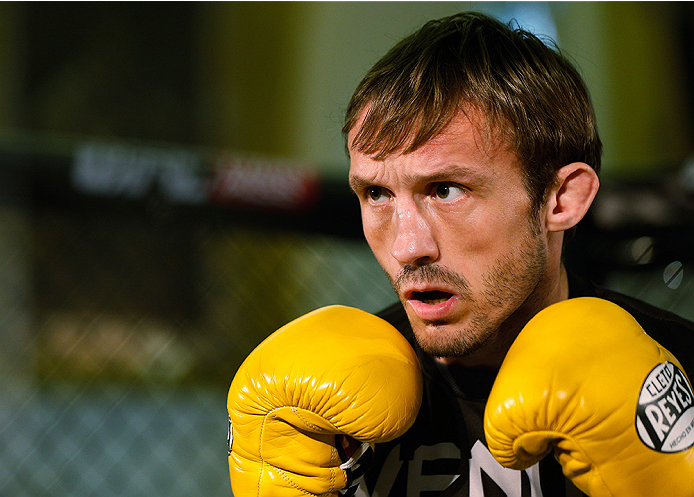 With five post-fight bonuses in his UFC career thus far, Brad Pickett isn’t known for his patience in the Octagon. As far as he’s concerned, when it’s time to fight, it’s time to fight, and if his opponents don’t feel the same way, it can lead to frustration on the part of the London native and the fans.

Unfortunately though, the former bantamweight contender is in a position in his flyweight run where patience is going to be necessary, as he’s only 1-1 in his fairly new weight class leading up to his Saturday bout against Chico Camus, meaning that a shot at the flyweight title is still a ways off. But he’s accepted that reality.

“I don't really have much of a choice, to be honest,” he chuckles. “I've just got to get on with whatever comes in front of me, and whatever challenges I face, I face. I've got to win these fights, but also do it in good fashion because that puts me up there quicker.”

But is it tough having to be patient?

Well, it wouldn’t be accurate to call a man of 36 in any other walk of life old, but in the fight game, there could be a sense of urgency to get things done now, and that was what initially pushed Pickett to the flyweight division in the first place earlier this year. He had won three of his previous five bouts at bantamweight, but with the 125-pound weight class in need of top contenders to challenge champion Demetrious Johnson, who better than a human highlight reel with a 2010 win over “Mighty Mouse”?

Things started out well enough for Pickett in March with a three-round win over Neil Seery, but in July, a bout with Ian McCall that could have secured a title shot for him ended up in a decision defeat, and questions about whether Pickett was going to return to bantamweight.

“I slipped up once, and it was by decision,” he said. “It's not like I got absolutely mauled or anything like that. So part of me wanted to go back up, but I didn't want to give up on my dreams yet. So I'm gonna see how this fight goes in the weight class and take it from there. If all goes well this fight, obviously I'll stay down in this weight class, and if it doesn't I think I'll move back up.”

The decision to stay at 125 shows the dedication of Pickett to that dream of a world title, because in the past he has made no secret of his distaste for the cut to the flyweight limit.

“Life is for living and when you're dieting all the time, it does ruin your mood,” he laughs, but he still believes that with a couple good wins, it will lead him back to Johnson, who he decisioned at bantamweight back at WEC 48 more than four years ago.

“At the moment, the weight class, in my eyes, is quite shallow for contenders at least,” he said. “It's a good weight class with a lot of good fighters in it, but most people have fought Demetrious, so they're looking for new contenders. With me also having that win over Demetrious Johnson, it definitely puts me ahead of other people. So I'm gonna win this fight and then look at it again.”

Camus is also a member of Pickett’s former neighborhood making the move down south. When asked what the Milwaukee product has to dread about fighting at flyweight, Pickett deadpanned, “Fighting me in his first fight, that's what he has to dread.”

But “One Punch” did have to make some adjustments for life in his new weight class, the most important being that the toe-to-toe slugfests he had come to love at bantamweight weren’t necessarily happening anymore.

“One thing is people don't want to stand there and fight; they want to point score and hit and run, that kind of thing. It's a little bit frustrating because normally, you want to get involved in the fight.”

Now that he’s acclimated though, he feels that a rematch with Johnson would be an interesting one.

“Styles make fights, and stylistically I match up well against him,” Pickett said. “It's up to me now to overcome the other obstacles in my way in the weight class.”

Even if he does though, don’t expect Pickett to be screaming from the rafters for a fight against the champ. He wants to let his fighting do the talking, but he won’t complain if his point is made by others.

“I do things quietly, get things done, and move on to the next one; that's how I carry myself. I just get on with things, don't make too much of a noise and let my fans make the noise for me.”