"I think some fighters get confused as to our job title. We’re not just fighters, we’re entertainers." - Brad Pickett 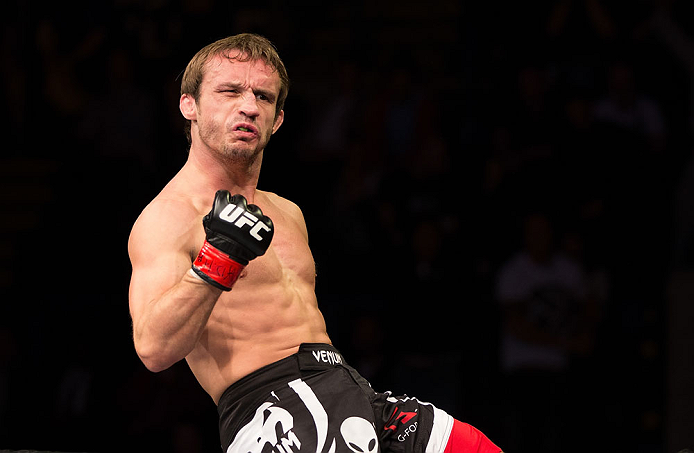 When your entire Zuffa career is filled with post-fight awards of one sort or another, bonuses are a topic of conversation that bantamweight contender Brad Pickett has gotten used to. Yet the crazy thing about the east London native’s ability to wow both fans and the folks issuing those bonus checks is that he could have had a perfect run in his seven fight UFC / WEC run instead of just five bonuses in those seven bouts.

“Sometimes there’s a bit of luck, depending on how other fights go as well,” said Pickett, whose current tally has him at a Submission of the Night and Fight of the Night in the WEC, and a Knockout of the Night and two Fight of the Night awards in the UFC. Two of my best fights, I missed out on a bonus. Against Demetrious Johnson (in April of 2010) I thought we had a really good fight and we missed out to the Korean Zombie (Chan Sung Jung) and Leonard Garcia. And also my fight with Ivan Menjivar (in December of 2010) was a really, really good fight, and I missed out to Anthony Pettis and Ben Henderson, when Pettis did that crazy kick off the cage. So they’re the ones I thought were more deserving, but sometimes it’s not a case of how good your fight is exactly; sometimes it’s how good the other fights are around you. I’ve had some good performances where the rest of the card hasn’t really shone as much I guess.”

That’s the humble guy with the growing bank account talking, but it’s hard to believe that anything Pickett has done in his eight year pro MMA career can be whittled down to simple luck. It’s more of a philosophy and attitude that allows Pickett to be a little more exciting than the next guy, simply because he is willing to take the risks some of his peers won’t when the bell rings. It’s something he didn’t just pick up over the last couple years either. Instead, he says it comes from watching fellow Brit Nigel Benn and Hall of Famer Mike Tyson ply their trade in the boxing ring years ago.

“‘The Dark Destroyer’ (Benn), he was the type of guy who wanted to go in there and finish guys,” said Pickett of the former middleweight and super middleweight champ. “Guys like him and Mike Tyson, these are the guys I looked up to because they went in there and they wanted to finish people. They weren’t looking at the 12th round and what’s gonna happen there. They were just trying to finish there and then, and if it got to the 12th round, they had been trying to finish since the first round.”

And whether they won or lost, you were going to be talking about their fight the next day, and that’s all Pickett wanted from his MMA career in those early days.

“When I started, I just wanted people to go ‘hey, I enjoyed that fight,’ and that sort of thing,” said Pickett, who turned pro in 2004. “It’s an entertainment business and you want to entertain people. People come to watch you fight and you don’t want them saying ‘that sucked.’ You want people to enjoy what you do, and in my head I’m conscious of that, though my fighting style also complements how I want to fight anyway.”

A standout on the British scene for five years, Pickett got his chance in the big leagues in 2009 when he was brought to the Zuffa-owned WEC. A Submission of the Night win over Kyle Dietz kicked things off for “One Punch,” and he never looked back, going 3-1 in the blue cage before picking up where he left off in 2011 as a member of the UFC roster. Yet while the three letters on his promotional business card changed, he still retains a fondness for the WEC, believing that the attitude he and his peers shared as they fought for public recognition remains today.

“I don’t know that math, but you put a lot of people from the WEC over into the UFC and I think a lot of us have hit a lot of bonuses,” said Pickett. “(Lightweight contender) Cowboy Cerrone hit a lot, I’ve got some, and I think it has a lot to do with the weight classes. We can throw hard and still knock each other out, we still submit each other, and we have the gas tanks to do it for 15 minutes, so if it does go 15 minutes, it’s normally a back and forth fight.”

Following a 2011 loss to current interim bantamweight titleholder Renan Barao in probably the craziest four minute and nine second fight you’ll see, Pickett got back to the win column with a Fight of the Night submission of Damacio Page and a Knockout of the Night over Yves Jabouin. You can certainly expect more fireworks this Saturday in Las Vegas when he meets hard-hitting Eddie Wineland at UFC 155, but Pickett’s approach to this fight is the same as it’s always been.

“I want to win, and if I get a bonus I get a bonus,” he said. “But I also don’t want to be in a boring fight and win. I think some fighters get confused as to our job title. We’re not just fighters, we’re entertainers, and if you don’t entertain the crowd in any way, you’re gonna be stuck in the prelims or the first time you lose you’re gonna get cut. You need to be exciting and entertaining, and win. You can’t be an exciting fighter and lose every fight and still think you’re gonna be in a job, and you can’t be the most boring fighter in the world and win every fight because you’ll be on the undercard half the time and when you do lose you might get cut yourself. So you’ve got to mix things up.”

Few do it better than Brad Pickett, and while his reputation in the game has soared in 2012, a final win for the year may do even more for him, as it’s likely to propel him right into the title picture, something he admits that he’s thought about.

“I don’t like to look past opponents because if I beat Eddie Wineland I go in one direction and if I lose to him I go in a different direction,” he said. “So it’s up to me to keep focused and concentrate on making sure I go in the right direction. With that said, I’ve been in the title picture a couple times. If I beat Renan Barao, I would have been in that position. When I was supposed to fight Miguel Torres and I got injured and Demetrious Johnson fought him instead of me and beat him, he got a title shot. When I fought Scott Jorgensen and he beat me, he got one as well. So I’ve been there, and hopefully if I win, then I can say ‘hey, look at me, I think I’m ready.’”