Brad Pickett: Man with a Plan

"I always wanted to be number one in the world." - Brad Pickett 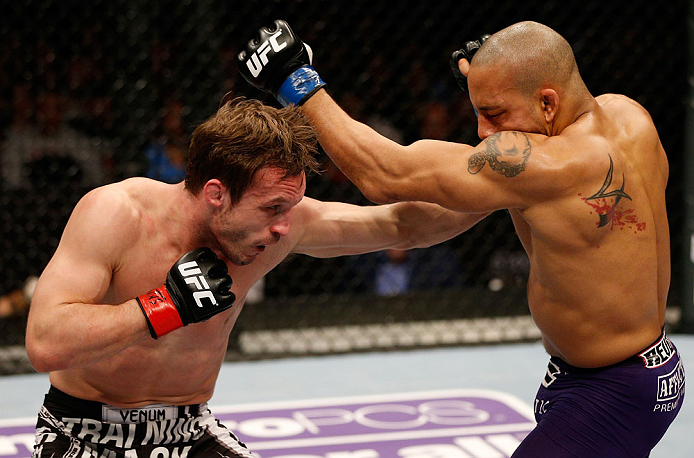 For a guy nicknamed “One Punch,” Brad Pickett is no one trick pony. He can knock you out, submit you, or simply outpoint you if need be, but he’s also a step ahead when it comes to his mixed martial arts career. For proof, you can look to his decision to drop from the bantamweight to the flyweight division, a new chapter that begins this Saturday with his bout against Neil Seery in London.

The 35-year-old could have stayed at 135 pounds and had more of the success he had already tasted: a top five ranking, three wins, and five post-fight bonuses in the UFC alone. But it wasn’t enough.

“I was ranked five at bantamweight, so there were four people ranked above myself, and I fought three of them, so it kind of let me know where to go, apart from fighting people behind me,” he said. “To me, not just as an athlete, but as a competitor, it really didn’t inspire me to go train to fight people behind me. Obviously, I want to keep moving forward. Even at my age, I’m not just happy to be in the UFC to make up the numbers. I want to achieve something with my career and I have achieved a lot already, I know that, but to me, I also believe I wasn’t the biggest bantamweight out there and I felt to myself that maybe I could make flyweight, and in my eyes, I always wanted to be number one in the world.”

In the 125-pound flyweight division, a weight class ruled with an iron fist by Demetrious Johnson, the need for top-flight contenders is a real one. Pickett, if successful in his new neighborhood, could be that contender. Want more? A win over Johnson at bantamweight back in their WEC days in 2010 makes a rematch even more compelling and, frankly, even easier to market to casual fans. It’s something that hasn’t gone unnoticed by Pickett, who won’t be shy about asking for the fight should he beat Seery, and he wouldn’t mind leading up to the bout by coaching against “Mighty Mouse” on The Ultimate Fighter.

“You don’t ask, you don’t get,” he laughs. “Demetrious has been a very dominant champion in the weight class, so there’s not really a lot of contenders out there apart from rematches, and I know him, as a competitor, he’d like to avenge one of his losses. It makes sense.”

It does, and it would have been something that could become a reality sooner rather than later if Pickett went into the O2 Arena and defeated his original opponent, fellow contender Ian McCall. But when McCall was forced to withdraw from the bout due to injury, Ireland’s Seery got the call to make his Octagon debut against the Londoner.

“I’m a little bit bummed that McCall pulled out,” said Pickett. “I was looking for a top ten opponent to keep things relevant, but I’m really glad to see that Seery stepped up and saved the fight. I’d rather fight somebody than nobody, and I’m really glad that I still managed to be on this card.”

As for the switch in opponents throwing his training into disarray, that just wasn’t the case.

“It didn’t alter my preparation, because for me personally, when I train, I train to make myself better, rather than train for a particular person,” he explains. “So if my opponent changes, it really doesn’t affect me too much because every time I go to the gym, my number one purpose is to make Brad Pickett a better fighter. Don’t me wrong, I look at the guy I’m fighting, if he’s southpaw or orthodox, and I try and have my sparring partners try and mimic his style, but I don’t really work on particular techniques too much, it’s more just to make myself a better fighter. So if I think I’m lacking things in my game, I always work on them anyway.”

Owner of a 1-1 slate in 2013, with a decision win over Mike Easton and a submission loss to Michael McDonald, both of which earned him Fight of the Night honors, Pickett is in a situation similar to that of Daniel Cormier and Raphael Assuncao at UFC 170 last month, or should I say Seery is in the same position newcomers Pat Cummins and Pedro Munhoz found themselves in? For Pickett, it’s a must win where most assume that nothing but looking spectacular will suffice. For Seery, it’s the chance to make an immediate impact in the UFC against a legit contender. So how does Pickett see the fight?

“It’s up to me as a professional to make sure I get the job done,” he said. “Obviously I’m going to go in as a heavy favorite, but I’ve been in this position a little bit before when I used to fight on the local scene. I was number one in Europe for a long time, I was trying to get into the WEC and stuff like that and I couldn’t get in, so I wanted to keep myself active. So I was always taking these really risky fights to keep myself active.

“He (Seery) is going to be dangerous because he’s got everything to gain and nothing to lose,” Pickett continues. “If he goes out there and gets beat like Cummins did, yeah, so what. But if he takes me to a decision, beats me, knocks me out or submits me, it’s a fairy tale story for him. So he has absolutely, in my eyes, no pressure. All the pressure’s on me to go out there and perform. But as a professional, I’m not worried. I don’t think I have to put this guy out in the first round or the second or even have to finish him; I just think I need to win, and that’s my job. It’s a test for me and I try to look at the positive things rather than the negatives. And the positive thing is it’s the first time for me going down to this weight class and maybe it’s good for me to have a little test to see how it is.”

That’s a man with a plan. It doesn’t mean he can’t alter it down the line though.

“If I come down to this weight class and it don’t feel good or I get beat, I’ll go straight back up to 135,” he said. “Life’s for living, so the sole reason for me to go down is a shot at being number one in the world. I don’t enjoy dieting all year round, it sucks, so for me, there is only one reason, and it’s to get that title shot.”