Brad Katona Is On A New Level

Fresh off his first professional loss, Brad Katona is confident in the changes he made in his fight camp to continue his trek up the bantamweight ladder.
By E. Spencer Kyte, on Twitter @SpencerKyte • Sep. 9, 2019

Saturday evening inside Arthur Ashe Stadium, Bianca Andreescu toppled Serena Williams in the finals of the U.S. Open to become the first Canadian tennis player to win a Grand Slam singles title. The rising star, who wasn’t even born when Williams won her first of six titles in New York, entered the tournament as the 15th seed and will invariably propel herself into the Top 10 with her win.

The 19-year-old had been on the rise already and started garnering greater national attention when she won the Rogers Cup at home in Toronto earlier this summer. Now with her triumph in the final major of the season, Andreescu should claim the Lou Marsh Award as the country’s top athlete and become the newest household name the country pins all of its tennis hopes on going forward.

Because that’s what happens up here in Canada in just about every sport outside of hockey: someone shows flashes of potential or enjoys a little success and they’re instantly adopted as “The Country’s Greatest Hope” in that particular sport and saddled with lofty, often crippling expectations.

Now, Andreescu has done more than show flashes of potential — she steeled herself away to defeat the greatest female tennis player of all-time in her first Grand Slam final — and deserves to be a major national story every time she steps onto the court. However, numerous others have been ticketed for greatness and thrust into the spotlight quickly, only to fail to live up to the grand projections and struggle under the weight of an entire nation.

The search for Canada’s “next big thing” in the mixed martial arts world was ongoing even when Georges St-Pierre was still reigning over the UFC welterweight division, but has only intensified since his departure.

The latest competitor to be cast in the role is Brad Katona, the 27-year-old Winnipeg native who won the featherweight competition on Season 27 of The Ultimate Fighter as a member of Team Cormier and followed it up with a dominant effort against Matthew Lopez in his sophomore showing at UFC 231 five months later. 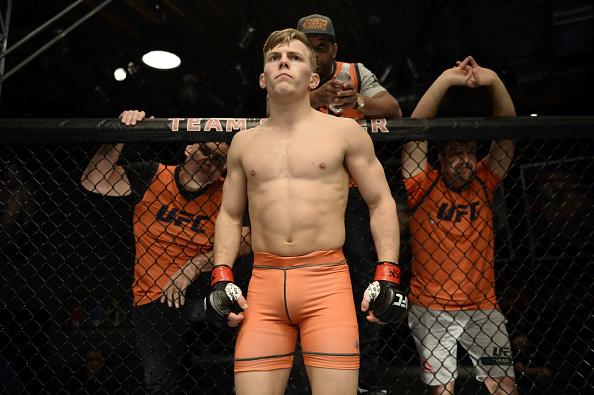 LAS VEGAS, NV - FEBRUARY 09: Brad Katona stands in his corner during the filming of The Ultimate Fighter: Undefeated on February 9, 2017 in Las Vegas, Nevada. (Photo by Brandon Magnus/Zuffa LLC/Zuffa LLC via Getty Images)

“It really means a lot; it’s something I want more than anything,” Katona said of being pegged as the country’s next potential star. “I really do care about Canadian MMA and us having a major star is vital, I think.

“We saw when we had Georges what it did to our country and in terms of the MMA athletes. He sparked growth in a lot of the current Canadian UFC fighters and if I can claim 50-percent of that, I would be very proud.

“If I want Canadian MMA to grow, it’s on me,” he added. “It’s very important that I have continued success in the UFC, work for that national crown, if you will, and carry that Canadian flag and show the world that we have elite MMA fighters.”

His progress towards that goal hit a snag earlier this year when Katona suffered the first loss of his professional career, dropping a unanimous decision to Merab Dvalishvili in the nation’s capital in May.

It was his second fight on Canadian soil in as many appearances and as he readies to make it three straight home games in the Octagon when he takes on Hunter Azure on Saturday in Vancouver, Katona has turned his setback in Ottawa into an opportunity to examine his preparation and fine tune the process in hopes of getting back into the win column.

“It wasn’t that we underestimated him, but were we under prepared? Yeah, if you’re looking at it, because we weren’t able to shut it down or get up as much as we wanted to get the fight in our favor, you would have to say we were under prepared,” Katona said, offering an honest and earnest assessment of his preparations and performance against Dvalishvili.

“I went back to the drawing board, took a detailed look at things and said, ‘Is this what a world championship camp looks like?’ Before my last fight, I would have said, ‘Yes,’ but you go back and look at the changes that I’ve made since and it doesn’t compare.

“Everything is on a new level and I’m excited to show everything that we’ve been working on,” continued Katona, who has lived in Dublin and trained at SBG Ireland for the last two years. “I feel we’ve gotten significantly better and taken a big step in the right direction, not just for this fight, but for in a year’s time when all this work really comes together and I can show I’m one of the best in the world.” 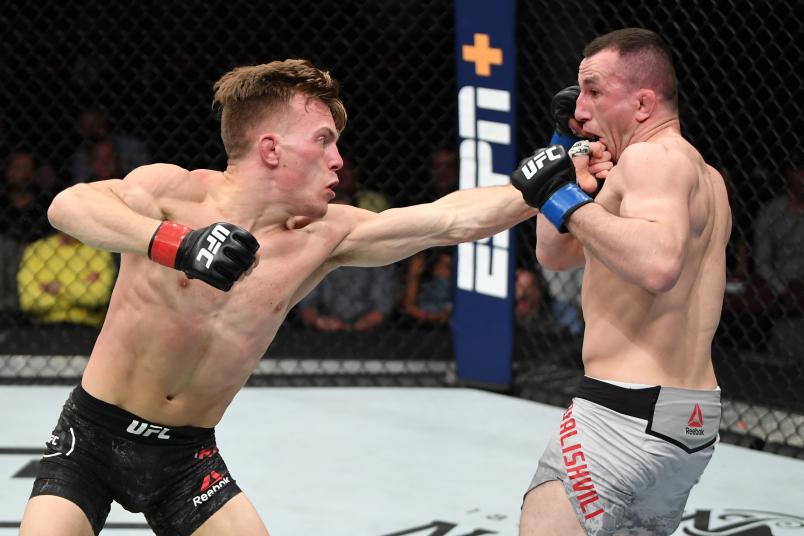 OTTAWA, ON - MAY 04: (L-R) Brad Katona of Canada punches Merab Dvalishvili of Georgia in their bantamweight bout during the UFC Fight Night event at Canadian Tire Centre on May 4, 2019 in Ottawa, Ontario, Canada. (Photo by Jeff Bottari/Zuffa LLC)

The loss to Dvalishvili hasn’t knocked Katona from his perch as Canada’s top UFC hopeful, but it has upped the ante on his bout against Azure this weekend in Vancouver.

The bantamweight division is deeper than it has ever been and the level of talent competing in the 135-pound weight class continues to rise, with fresh prospects and new potential contenders emerging every couple of events. While most athletes experience setbacks during their quest to climb the competitive ladder, a two-fight skid in a stacked division would represent a detour in Katona journey and it’s one he’s keen on avoiding.

“For him, it’s quite a step up in competition,” he said regarding Azure, who arrives in the UFC off a dominant decision win earlier this summer on Dana White’s Contender Series that pushed his record to 7-0 overall. “I am the best guy he’s ever fought. I am the most experienced fighter he’s ever fought and it’s the biggest stage he’s ever fought on.

“I’ve been here multiple times before. The best guy he’s beaten was 4-0 and before that, it was 6-4, I believe. This is a different story. This is UFC-level. I think he’s good, but he’s not refined and those holes are going to show.

“I think his career has been relatively quick, so he’s had a steep incline in competition and we’ve seen nobody really be able to give him any moments where he’s had to dig real hard,” continued Katona, who beat Kyler Phillips, in the quarterfinal round of the TUF 27 featherweight tournament before submitting Bryce Mitchell in the semifinals. “He got rocked in one fight, but (outside of that), he’s been able to steamroll through guys, so when there is that competition and you can’t build that momentum, let’s see how he starts behaving and let’s see what starts happening because I think that’s where I think he starts falling apart.”

None of what the promising Canadian said is delivered with derision or disrespect; it’s simply the factual analysis of a cerebral, analytical fighter who has a degree in engineering. He’s sat down with his head coach John Kavanagh and scouted Azure, taking note of tendencies, studying the way his last several fights have played out in order to get a feel for what the undefeated prospect will have to offer on Saturday.

And in their assessment, there should be plenty of opportunities to get a finish, though how it happens is up to Azure.

“You know, John said something earlier this week that stuck with me — ‘My opponent chooses how he loses,’” Katona began when asked for an assessment of how the fight plays out. “I’m going to go out there and throw a whole bunch of problems at him and I’m very confident that something is going to sneak through.

“I’m going to be trying (to finish) and he just needs to choose which door to open,” he added. “There are a lot of opportunities for a quick finish, but that’s not necessarily our choice. That’s his choice; it’s on him and he gets to decide.”