One of a few Canadian natives to fight on the UFC Ottawa main card on Saturday, Brad Katona has the experience of hearing the roars from his Canadian brethren. After earning the The Ultimate Fighter Season 27 crown, Katona was given a UFC debut fight in Toronto against Matthew Lopez.

Katona got the victory at UFC 231 and gained more experience than most are able to in their debut fights. When the crowd’s energy rose for the Winnipeg native, Katona had to reel in his emotions. 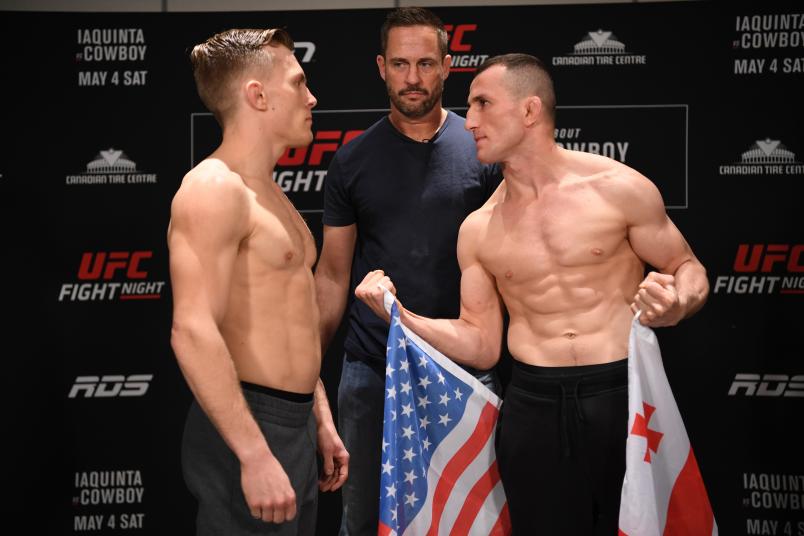 Brad Katona and Merab Dvalishvili face off on May 3, 2019 in Ottawa, Ontario, Canada. (Photo by Jeff Bottari/Zuffa LLC)

“You definitely feel it, it’s like an injection of energy,” Katona said of the Toronto fans. “You have to be careful because you could get caught up in the moment and that energy can blow. You could lose your composure. In the moment you have to keep it under wraps but after it overwhelms you and creates such a lasting memory.”

Katona is hoping to create a similar memory this Saturday in Ottawa, where he faces Merab Dvalishvili. Despite being from many miles away in Winnipeg, Katona expects to be greeted with support from Ottawa.

UFC.com sat down with the TUF champ to discuss his Canadian roots, UFC Ottawa and much more.

UFC: Do you aspire to overtake GSP as the quintessential Canadian champ?

Brad Katona: If I could, that is the goal. It’s not just to be best in the world, but ‘best Canadian ever’ isn’t a bad title. GSP is one of the best fighters in history so if I could rival him that would be a great honor, but I’m still at the early stages of my career.

UFC: We know Winnipeg isn’t exactly nearby, but I imagine you’ll have a lot of support here this week.

BK: When I walked out I got a large pop (in Toronto at UFC 231). It felt amazing walking out to that and it felt like I had the whole country behind me. I’m expecting the same here. I’m proud to be supported by them.

UFC: You had a good win at UFC 231, but you didn’t seem entirely satisfied with it, why not? Isnt a win a win?

BK: There’s parts of my last win that I thought I could have done better. I could’ve avoided some uncomfortable situations that if I was against a different fight, could have been exploited. The benefit of having that is that even though we got the win, we got the benefit of a loss as well. We can go back and reflect and make the changes. It was a good fight and a good experience to have.

UFC: Tell me about your opponent Merab Dvalishvili, what do you make of him? Where are your advantages in this fight?

BK: On paper I think I have the greater skills almost everywhere. But with that said he makes his style work for very well. I don’t think it would work for anyone else. He could give any bantamweight in the division a run for their money. But I think I have the best style to beat him.