Boston Salmon To Use His Past To Fuel His Future

After a disappointing UFC debut that lasted less than 30 seconds, Salmon is coming into his UFC Boston match-up with Randy Costa more motivated than ever.
By Zac Pacleb, on Twitter: @ZacPacleb • Oct. 15, 2019

And yet, that was the reality for Boston Salmon.

The first fighter to earn a contract from Dana White’s Contender Series in 2017, Salmon battled injuries and cancelled bouts before finally making his first steps into the Octagon at UFC 236 in April. Before he could get settled, however, the fight was over. His opponent, Khalid Taha, threw an overhand right that Salmon parried, but before the Hawaiian could counter with a hook, Taha’s own left hand caught Salmon flush. A quick scramble later, and the fight was called. Although Salmon felt like the referee called it early, there wasn’t anything he could do.

“It came down to me not pulling the trigger,” Salmon told UFC.com. “I got humiliated in front of a million fans, and that’s what it really came down to. I didn’t pull the trigger.”

Although Salmon wanted to get back into the Octagon as quickly as possible, the opportunities weren’t there. He admitted that the loss took “a while to get over” but also provided lessons he took to heart and into training.

“This camp, mentally, I am way better prepared than my last camp,” he said. “Everything happened in the right place. My body, I feel a lot better. I feel a lot younger. It took me a while to get that rust off, and I feel like that rust is finally off.”

Salmon said he started training his mental game using visualization as well as by keeping a diary where he would write down what he wanted to improve in his next session. While his last fight still leaves an understandably bitter taste in his mouth, the chance to make up for it in the city he was named after seems like a perfect storm.

Speaking of his name, how does a kid from Hawaii end up with a name from a city more than 5,000 miles away?

Simple: his dad is a big Boston sports fan.

Ironically, his parents had never made it to Beantown until this past April. They touched down in the city for this first time and took in a Red Sox game at Fenway Park before heading to Atlanta for their son’s fight.

As for his opponent, Salmon holds Randy Costa up with a high amount of respect. The two nearly fought previously, but when both competed at UFC 236, they became fast friends. Costa described Salmon as “wicked cool,” and Salmon offered Costa a place to stay should he ever end up in Las Vegas, where Salmon lives and trains.

That said, Salmon might find himself hard-pressed to find a friendly voice in TD Garden on fight night due to Costa’s Massachusetts roots.

Or, as Salmon argues, maybe not? 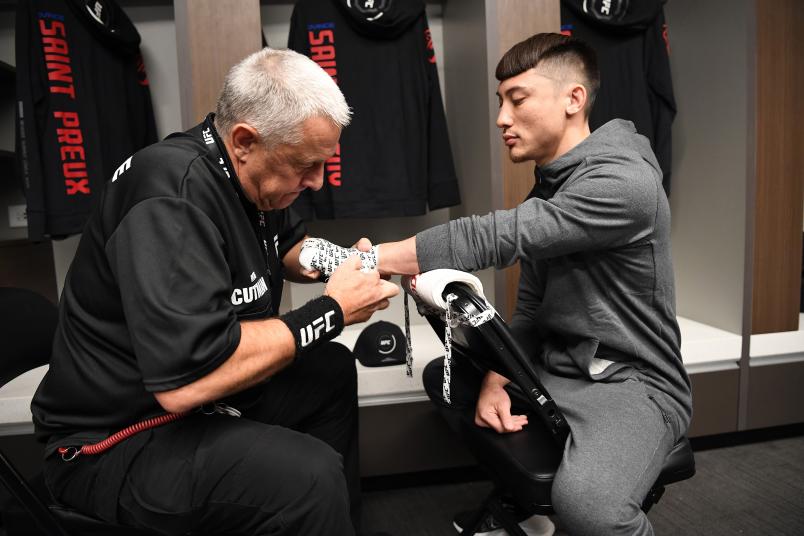 “My question is: is it in enemy territory?” Salmon said. “I feel like the fans are going to have some love for me too, right? You can’t knock a kid named ‘Boston’ in Boston, right?”

Who knows if he’s right, but what is certain is that Salmon is eager to show everyone who he is as a fighter. His debut might’ve ended before he could really get started but, in retrospect, he feels like it revealed some critical holes that he believes are patched up ahead of his second shot at a UFC victory.

“That last fight was a tough fight to get over,” Salmon said. “It took me a while, but I’ve learned a lot from it. I feel like I’ve become more of a complete fighter, and there’s a lot of things I’ve worked on as a fighter just mentally, physically and emotionally.”