Boston Fans Get Up Close With Idols McGregor, Aldo

Watch highlights from the Boston stop of UFC 189 World Championship Tour - Click Here
And don't forget, tickets for UFC 189 go on sale Friday, March 27 and they're going to go quick - Get details

Amid the vicious taunts and pointed challenges, there were heartwarming gestures of kindness and warmth Wednesday when UFC featherweight champion Jose Aldo and top challenger Conor McGregor met Boston fans on the fourth stop of their UFC 189 World Tour.

Onstage at the historic Strand Theatre in the city’s diverse Dorchester community, UFC President Dana White told the largely pro-McGregor crowd that he’d been warned by Aldo’s trainer to keep the emotionally charged fighters apart due to their growing animosity on this eight-city tour.

All that viciousness dissipated in an instant when one tiny fan received an onstage embrace from his UFC hero.
> Watch UFC 189 Championship Tour Embedded: Episode 1 | 2 | 3 | 4 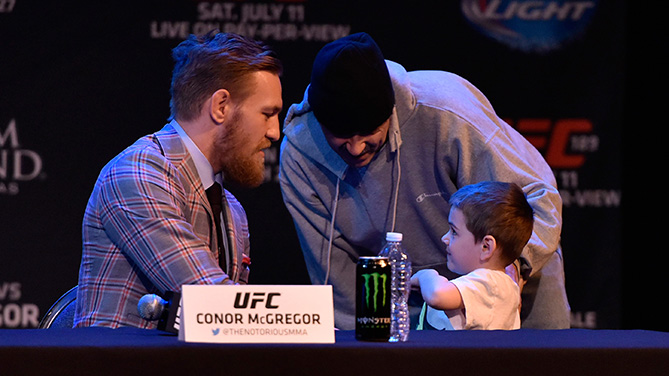 As White moderated questions from the audience, he motioned for Aaron Patrick Braley, Jr., 4, from Manchester, N.H. to join him, Aldo and McGregor on the stage. The youngster scrambled up the stage’s steps and rushed to McGregor, his idol who captivates him on YouTube videos, and held out a photo to be signed.

McGregor smiled broadly, hugged the boy, signed his autograph and posed with both hands atop Braley’s shoulders as a family member quickly snapped photos of the two. The crowd erupted in applause.

“We watch Conor on the computer – Aaron loves to walk around like ‘The King,’” said Braley’s guardian and grandfather, Shawn Lauzon, who drove the boy to Boston after hearing of the World Tour on UFC.com. “Conor McGregor is all ‘A.J’ can talk about.”

Young Aaron ‘AJ’ Braley’s life has been difficult, Lauzon admitted. “His mother’s a junkie. His father’s in jail. I have custody of him. I’m a single grandparent. He has a 2-year-old brother. And he also loves Conor. It’s Conor McGregor, all the time, at my house.”

Lauzon took his oldest grandson out of daycare early on Wednesday “and he was so excited to see Conor McGregor. He’s Irish, like Conor. This means everything to him.“

Little Aaron was born addicted to heroin, just like his mother, Lauzon said, and has struggled to overcome the effects of that prenatal exposure. The child’s teeth are stunted as a result, but Aaron identifies with McGregor’s combat mouthpiece. 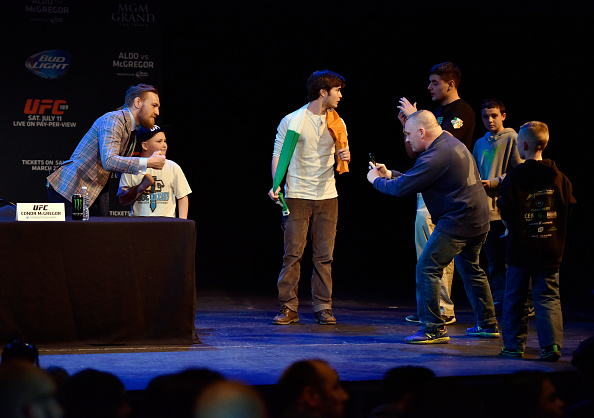 “He sees that Conor has no teeth when he fights, so that makes him feel better,” his grandfather said, smoothing Aaron’s hair with his head as his grandson beamed up at him. “This one has been through a lot in his life. He’ll never forget this night, though.”

“I talked to Conor McGregor!” Aaron blurted out, holding up his autographed photo, a printout of McGregor’s UFC pose from a computer. “He talked to me! He was really nice.”

This sort of emotional fan-fighter encounter took place throughout the Boston stop of this UFC 189 World Tour to promote the 145-pound title fight and main event of the July 11 pay-per-view at Las Vegas’ MGM Grand Garden Arena. Aldo and McGregor each warmly greeted fans on-stage who specifically requested a personal meeting or a photo. Aldo even held the camera for two fans who begged to pose with him, and he hugged both before they exited the stage.

Another fan who received an on-stage greeting was Ben Silverstein, 21, a business student at Northeastern University. When he appeared in an “Embedded” episode previewing UFC Night Night Boston on Jan. 18, featuring McGregor vs. Dennis Siver, Silverstein asked McGregor on-camera if he could get a picture before he was swallowed up by a crowd of fans.
> READ: Boston recap | Los Angeles recap | Las Vegas recap | Rio de Janeiro recap

Wednesday night, Silverstein took the mic and asked if he could finally get that picture. McGregor happily obliged.

“This was so cool. I’m so glad I came here for this,” Silverstein said. “It was unbelievable. I was in ‘Embedded’ for Conor’s last fight in January. I was at the open workouts and I was yelling at both the fighters because I’m such a fan. I was able to go to Dillashaw-Barao and I was able to see that upset.

“I’m a huge Conor McGregor fan and I’m so glad I finally got this picture.” 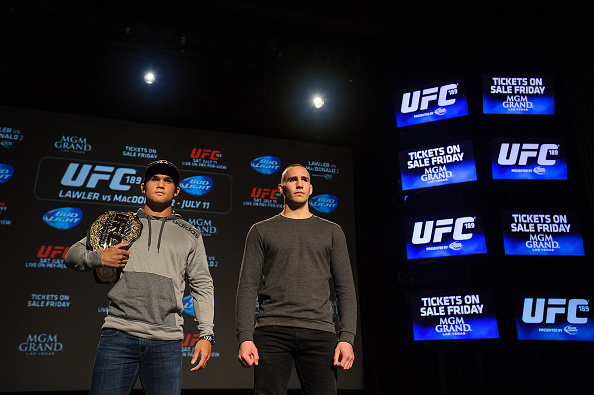 UFC welterweight champion Robbie Lawler, who will see his first title defense come against Rory McDonald on the same UFC 189 card, will join Aldo and McGregor for a press conference Thursday night at New York City’s Beacon Theatre on Broadway in midtown Manhattan.

All four fighters will make appearances in Toronto on Friday. Lawler and McDonald continue on to Montreal, while Aldo and McGregor will travel to London and Dublin, Ireland, respectively, on Saturday in advance of tour stops in those cities on Monday and Tuesday.

The World Tour wraps up in McGregor’s hometown of Dublin on Tuesday with a fan fest at The Convention Centre Dublin, beginning at 5 p.m. GMT.