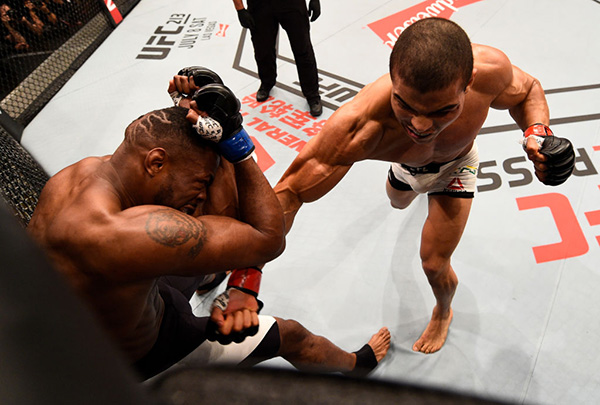 Paulo Borrachinha is preparing for only his third UFC fight, but the responsibility is the same as that of a more established fighter in the organization, as he faces former champion Johny Hendricks on the biggest card of the year, UFC 217, on Nov. 4.

That’s not bad for someone who arrived in the UFC in March, and even the 26-year-old admits his ascension to such an event is surprising to some, but not to him.

"If you asked me about that before I got to the UFC, I would say I would never imagine being in this position," he said. "But now that I’m here, and after getting good results, I figured that a harder test would come at some point, and it did".

As the difficulty increases, the Brazilian knows that he needs to focus on his evolution to continue having good results. That's why Borrachinha packed his bags and headed to the United States, where we spent three weeks sharpening his techniques, especially the ones that involve wrestling, under the watch of coach Eric Albarracin at flyweight contender Henry Cejudo's gym in Arizona.

"Every fight in the UFC is a test,” said Borrachinha. “For me, it's all the same; the only thing changing is the opponent. It's always the same task. I always train a lot for any opponent, whether it's a big name or not, and that's it. I have 10 fights, nine knockouts, eight of them in the first round, because I train for each fight as if it was the fight of my life, as if it was for a belt.

"I'm training as hard as I can for this fight, the same way I've trained for the last one, and how I'm gonna train for all of the next ones,” he continues. “I'm just going to do my best.”

And if he is indeed the best fighter on the night of Nov. 4, Borrachinha has well-defined plans: seeing his name on the list of the top 15 middleweight fighters, and maybe facing someone who is also there.

"After this fight, I want to fight against someone who is well ranked, top 10 if possible. I believe that after this fight with Hendricks, I will be in the rankings, and then I’ll make my way to the title."