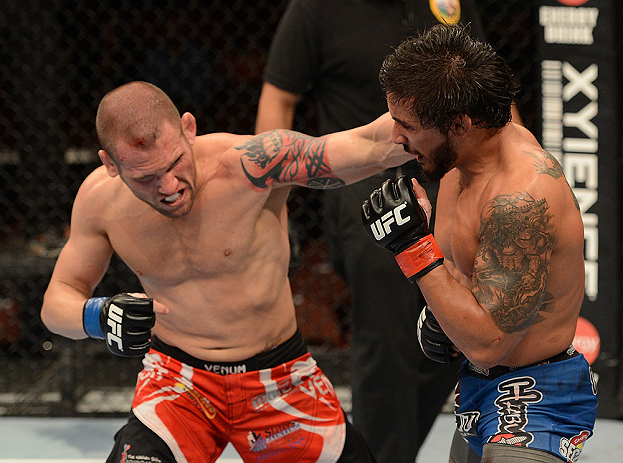 After a night of UFC fights, two questions enter every fan’s mind: when is the next event and who won the bonuses? A third through the year with 11 Octagon evenings under our belts, here’s a look back at the award winning battles of 2013.

The New Year started off south of the Equator in Sao Paulo, Brazil with a north of the shoulders head kick Knockout of the Night (KOTN) delivered by Vitor Belfort. In the middleweight main event, “The Phenom” caught Michael Bisping with a stiff shin to the side of the skull about 90 seconds into round 2, which marked the first time Belfort has ever won a UFC bout that has gone outside of the opening round. The Submission of the Night (SOTN) went to an inflated Ildemar Alcantara, who won his UFC debut via kneebar in the second round of a light heavyweight bout against Wagner Prado and will next return to the Octagon as a 35 pounds thinner welterweight. In an action-packed meeting of two products of The Ultimate Fighter system, C.B. Dollaway edged out a semi-controversial split decision win over Daniel Sarafian to land the pair the Fight of the Night (FOTN).

Just like in 2012, the first UFC on FOX card of the season was held at the United Center in Chicago, Illinois, but this time those in attendance were treated to a headlining title fight. In the main event, UFC flyweight champion Demetrious Johnson defended his strap against TUF 14 winner John Dodson. The champ struggled in the first two rounds until finding his rhythm in the final three to maintain his spot on top and net both fighters a FOTN bonus. It wasn’t entirely surprising that human highlight reel Anthony Pettis secured his second KOTN award, but it was a shock to see “Showtime” win it via a body kick less than three minutes into his tangle with Donald “Cowboy” Cerrone. As for the SOTN, light heavyweight Ryan Bader struck and submitted veteran Vladimir Matyushenko with a left hook followed by a guillotine choke en route to the fastest submission win in the division’s UFC history.

It was easy money to bet on former UFC lightweight champion Frankie Edgar tangling with current UFC featherweight champion Jose Aldo for the 145-pound title as the FOTN, and they were. The two entertained for 25 minutes with a martial arts chess match that only furthered the elite credentials of both fighters. What fans couldn’t or wouldn’t have guessed was that Antonio “Bigfoot” Silva - down two rounds to none to former Strikeforce champ Alistair Overeem - would begin the final period by obliterating Overeem against the cage with powerful punches. Silva earned a win, a KOTN bonus, a title shot against Cain Velasquez at UFC 160, and the respect of Overeem in this heated heavyweight grudge match. Last but not least, lightweight Bobby Green dropped the first round to Jacob Volkmann, took the second round, and locked in a rear naked choke with about 30 seconds left in the third round to win his UFC debut and a SOTN bonus. Out of all the great performances at UFC 156, it was Green’s that UFC President Dana White couldn’t stop talking about.

In front of a crowd of his English countrymen, Tom “Kong” Watson became the first of three UFC fighters this year to capture two bonuses (KOTN and FOTN) in one fight. The bout began badly for Watson, as his heavy handed adversary Stanislav Nedkov dropped and almost stopped “Kong” in the first round. Watson persevered and landed a bevy of body shots (both knees and punches), which wore down Nedkov and finished him in the second. The SOTN was well-earned, regardless of it being the sole submission of the card, by interim UFC bantamweight champion Renan Barao with his fourth round arm triangle choke of challenger Michael McDonald. After a decision victory over Urijah Faber and the stoppage win over McDonald, with a defense against Eddie Wineland looming in June, Barao is quickly racking up a resume almost on par with the sidelined bantamweight champ Dominick Cruz.

The event that was primed to make UFC history started with a different sort of first as Kenny Robertson hooked the SOTN bonus by way of a submission he made up. Halfway through the first round, Robertson took Brock Jardine’s back, so Jardine leaned forward and tried to stand up to shake Robertson off of him. Robertson held position and simply lifted up Jardine’s left heel, causing his leg to straighten into a creative variation of a knee bar. While far from his first KO/TKO win, “Ruthless” Robbie Lawler scored a KOTN over former #1 contender Josh Koscheck in Lawler’s return to the UFC following a nine year absence from the Octagon. As for the FOTN, seeing is believing, as TUF 14 finalist Dennis Bermudez and Matt Grice played rock ‘em sock ‘em robots with each other for three unbelievable rounds. One would have to think this frenzied featherweight fracas is on the shortlist for Fight of the Year.

Up until the final two fights on the card, the Japanese fans in the Saitama Super Arena were treated to a mixed bag of fairly uninspiring decisions. Business picked up when the 7’ Stefan “Skyscraper” Struve took on the 5’10” former PRIDE and K-1 star Mark “Super Samoan” Hunt. Hunt put on a performance for the ages, featuring a third round combination of punches which TKOed his opponent, broke Struve’s jaw, and nailed down a KOTN bonus, only to be outdone minutes later by one of the wildest clashes in company history between knockout artists Brian Stann and Wanderlei Silva. Like entering a time machine, “The Axe Murderer” returned to the fighting form from days most thought were long behind him and punched his way to the 25th KO/TKO win of his illustrious career. It was crystal clear that Stann/Silva was FOTN, but, with no submission win on the card, the UFC decided to give Silva a KOTN bonus as well as Hunt.

Sometimes the co-main event is so good it should be five rounds too, and such was the case when Johny Hendricks and Carlos Condit duked it out on their way to a deserving FOTN bonus. Even with the UFC welterweight belt on the line in the main event, Hendricks and Condit simply outshined their competition with an up and down, pillar to post, 15 minute war, which had UFC President White emptying out a thesaurus full of superlatives about their performances. The KOTN was awarded to the explosive hands of Jake “The Juggernaut” Ellenberger and his first round stoppage of former Strikeforce welterweight champion Nate Marquardt. No SOTN bonus was given, making it the second of three events this year without a single submission win on the card.

The lighter weight classes delivered hook, line, and sinker at the UFC’s second event in Stockholm, Sweden. The FOTN was a typical pedal to the metal, 15 minute slugfest to a split decision between bantamweights Brad Pickett and Mike Easton. Hometown hero Reza Madadi caught a near fight-ending foot to the face in round one from TUF 12 finalist Michael Johnson before battling back with a SOTN tap via D’arce choke in the third round. But that night’s headlines went to debuting Irishman Conor “Notorious” McGregor and his 67 second KOTN of Marcus Brimage. All eyes were firmly on “Notorious” as he won his 12th career fight by KO/TKO.

Women can war. In the featured women’s bantamweight title eliminator, former Strikeforce women’s bantamweight champ Miesha Tate took on undefeated wrecking crew “Alpha” Cat Zingano. The younger veteran Tate snagged the early lead, but was railroaded in the third round by Zingano’s relentless attack of knees and elbows to a TKO and FOTN finish. The KOTN was a quick stoppage by heavyweight Travis Browne with elbows of his own to the side of opponent Gabriel Gonzaga’s head while defending a takedown. The last bonus was secured in the first fight of the card by Daniel Pineda, who quickly captured Justin Lawrence’s arm with a kimura, earning him the SOTN award.

10. UFC on FOX: Henderson vs. Melendez

No need for fancy submissions when eight of the 12 bouts end by KO/TKO, tying a UFC record. The first of two KOTN bonus wins happened in the opening scrap between a collegiate wrestler, Clifford Starks, and an Olympic wrestler, Yoel Romero. The two grapplers never made it to the floor, as the debuting Cuban Olympian Romero took to the skies with a pinpoint accurate flying knee, which ended the middleweight tangle 90 seconds from the start. The second KOTN came via laser head kick from former Strikeforce lightweight champion Josh Thomson to the top of contender Nate Diaz’s dome. It was the first KO/TKO stoppage of Diaz in his career and was a glorious return from a nine year absence to the Octagon for Thomson. The FOTN was your average barnburner brawl we’re all learning to expect from TUF alum Matt Brown against a younger counterpart in Jordan Mein. The second round KO/TKO finish for Brown improves his win streak to five with four punishing stoppages.

They don’t call him “Big Country” because the heavyweight throws small punches. Roy Nelson blasted Cheick Kongo with that devastating overhand right two minutes into their bout en route to his third first round knockout win in a row, with two of them winning KOTN bonuses. The FOTN and SOTN went to Pat “Bam Bam” Healy for his back-and-forth lightweight clash with Jim Miller. Before Strikeforce closed its doors for good, Healy was the #1 contender for the 155-pound title, but he never got to fulfill that chance at the belt. In his first Octagon appearance, “Bam Bam” choked out an elite opponent on PPV and won two bonuses. And thanks to the silver-tongued TUF alum Bryan Caraway, the bonuses were $65,000 each instead of the usual $50k.