Middleweight veteran Tim Boetsch spoiled the Oklahoma homecoming of Johny Hendricks on Sunday, stopping the former welterweight champion in the first round of their UFC Fight Night co-main event at Chesapeake Energy Arena in Oklahoma City.

Boetsch used his movement and superior hand speed to take the lead early, but Ada’s Hendricks did start finding his range late in the opening frame, getting him on the board.

Thirty seconds into the second round, though, Boetsch suddenly struck with a right kick to the head that drove Hendricks into the fence, and “Bigg Rigg” was unable to recover, with Boetsch emptying his tank with a series of right uppercuts that put Hendricks on the deck and brought in referee Kevin McDonald to stop the fight at the :46 mark.

A wild scramble saw the fighters tumble to the mat in the first minute, and while Herrig (13-6) was able to take Kish’s back, Kish (6-1) fought her way out of trouble and to her feet. Herrig got another takedown moments later, and this time she got the mount. Again, Kish got loose and upright, and on Herrig’s next takedown attempt, the Californian was able to work her way into the top position.

After the first round was fought mainly on the mat, Herrig and Kish decided to keep it standing for the first three minutes of the second, with the two engaging in several exchanges. Kish emerged from these with a cut over her eye, and Herring went on to score a takedown, adding to her point total before Kish reversed position late in round two.

Herrig kept the ground pressure on in round three, and remarkably Kish was able to survive a tight rear naked choke, but the “Lil’ Bulldog” was relentless in her attack, and she dominated the final frame en route to a decision win by verdicts of 30-26 twice and 29-27. 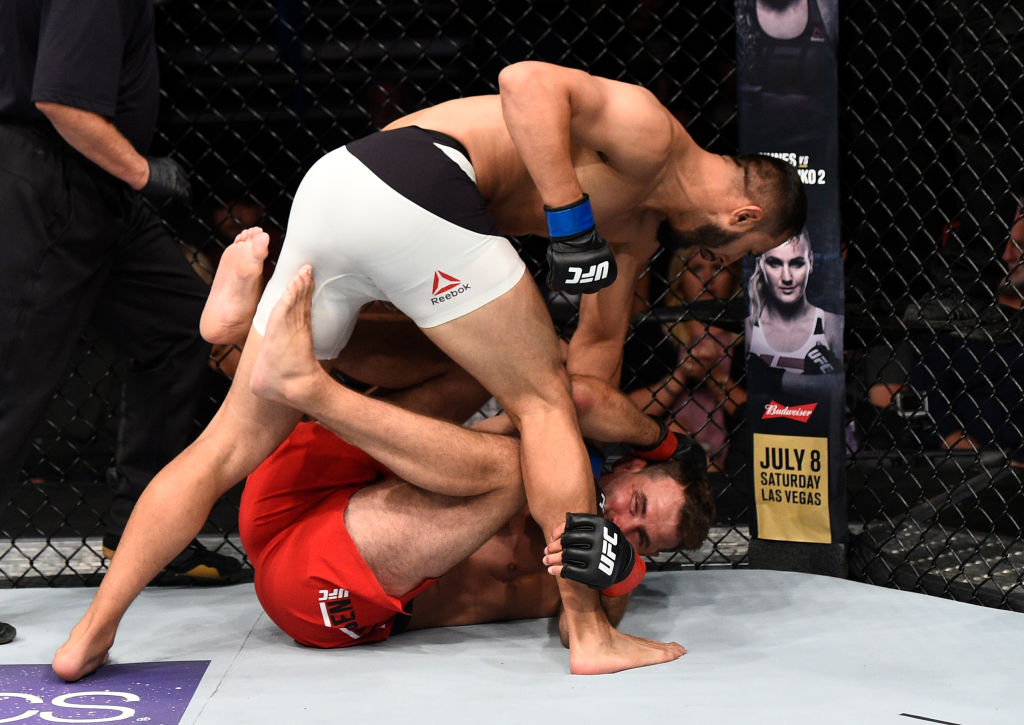 Highly touted light heavyweight prospect Dominick Reyes lived up to his “Devastator” nickname, knocking out Denmark’s Joachim Christensen in the first round.

Fighting for only the seventh time as a pro, Reyes went on the attack immediately, and after rocking Christensen, he refused to let him off the hook, with a big straight left hand being the catalyst for referee Gary Ritter to halt the fight 29 seconds into the bout.

It wasn’t a barnburner, but welterweight veteran Tim Means will take the win over Alex Garcia, which he scored via unanimous decision.

Garcia was throwing heat from the start, jarring Means in the opening minute before getting a brief takedown. Once Means rose, Garcia kept him locked up briefly before the Albuquerque product fought loose. Means was able to settle in from long range, but when Garcia would rush in, he was scoring well with hard punches.

The pace ground to a standstill in round two, with a couple solid shots by Means perhaps earning him the frame.

Garcia got a quick takedown to start the third stanza, but Means scrambled up immediately, landing a punch as he rose for good measure, and for the rest of the round, “The Dirty Bird” was able to use his height and reach advantage to keep Garcia from threatening him any further.

UFC Hall of Famer BJ Penn looked better than he had in his previous two fights at featherweight, but it wasn’t enough to get by Dennis Siver, who defeated the Hawaiian via majority decision.

In the first round, Penn and Siver didn’t fight at a pace expected from two 38-year-olds, but as the frame wore on, it was Siver (23-11, 1 NC) who was the busier and more effective of the two, with his wide variety of kicks being his main weapon of choice.

Penn (16-12-2) started getting his jab on target in the second, and that was able to slow down Siver’s kicking game slightly. With a little under two minutes left, Penn dropped Siver with a right uppercut, and while he was unable to do anything with his foe on the mat, that knockdown likely won him the round.

The positives of the second round disappeared for Penn in the final frame, though, as Siver put the pressure on, outworked “The Prodigy,” and looked to have the former two-division champion on the verge of a stoppage. Penn made it to the final horn, but it was Siver’s night, as the Germany product won via scores of 29-28, 29-27 and 28-28.