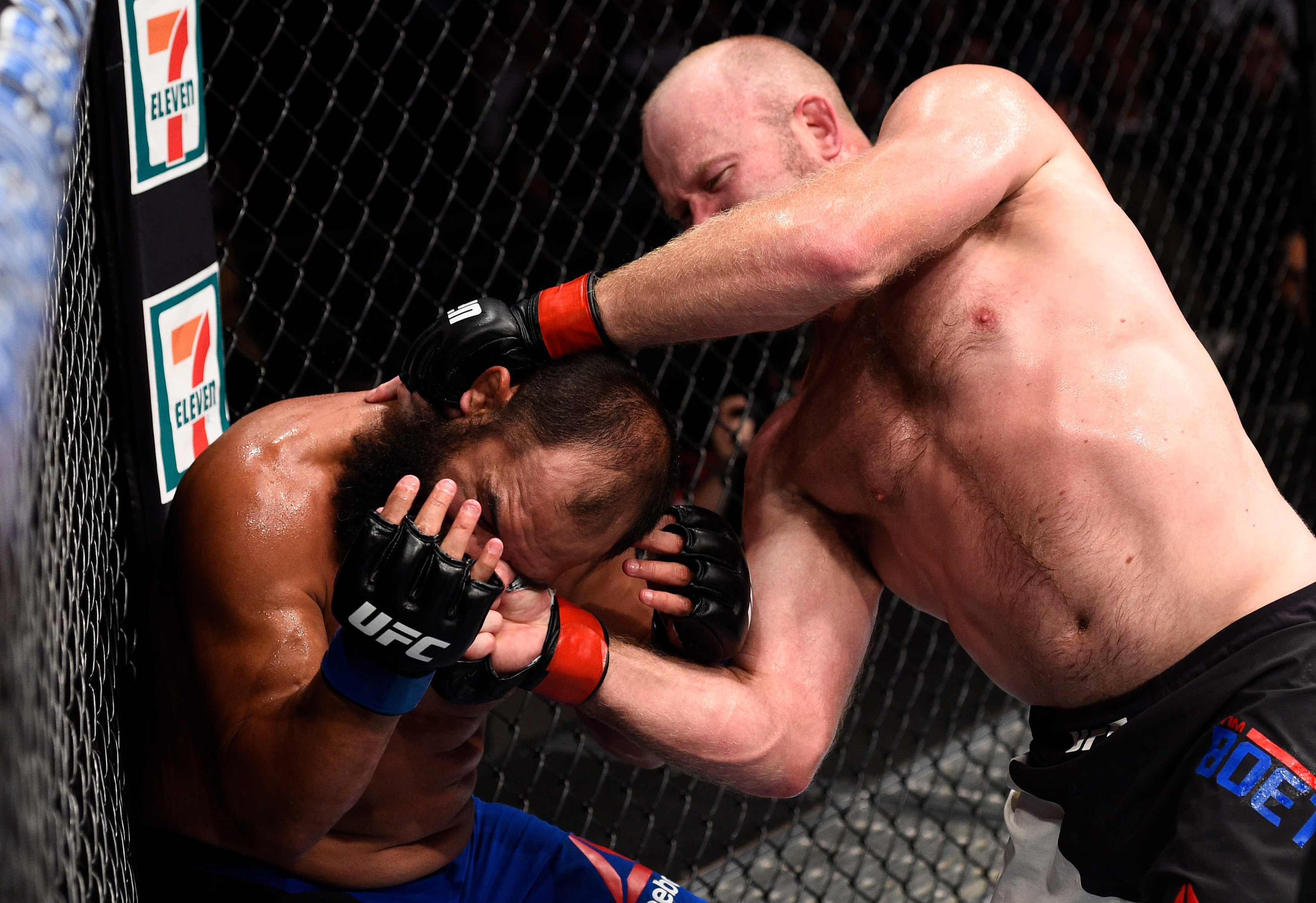 Tim Boetsch punches Johny Hendricks in their middleweight bout during the UFC Fight Night event at the Chesapeake Energy Arena on June 25, 2017 in Oklahoma City, Oklahoma. (Photo by Brandon Magnus/Zuffa LLC/Zuffa LLC via Getty Images)" align="center" />
Tim Boetsch isn’t the most active when it comes to social media. He darts in and out and makes his posts, but he’s not one of those Tweet-a-minute guys. “The Barbarian” did show up on February 2, though, posting a commemorative ticket from the night ten years earlier when he debuted in the UFC with a stirring first-round finish of David Heath.

“I made a post, I think my wife said, ‘Congratulations,’ and that was about the extent of that,” he laughed.

Boetsch is exaggerating when it comes to the reaction to the post, but it does illustrate where he stands in the modern MMA game. Go figure, the longtime middleweight contender would be content with showing up, getting a win and going back home rather than figuring out how best to build his brand.

“I just like to show up for work and do my job, and then get home and enjoy life,” he said, adding, “I think I present a lot of problems for the marketing team.”

It’s all tongue in cheek, but what do you do with a 37-year-old veteran who simply wants to fight, and who does it better than most? Heading into a Saturday showdown with Antonio Carlos Junior, he’s wondering the same thing, laughing as he points out that he had to take a stress test in the lead-up to the bout.

“I’m the old guy all of a sudden,” Boetsch said. “That’s okay, I’ve been looking up to the older guys for a long time and I had the pleasure of getting knocked out by an old guy (Dan Henderson) one time in New Orleans. (Laughs) So I’ve got a lot of respect for the old guys that can hang around and fight. And I feel like I can still perform at a very high level, and I’m feeling sharp. Unfortunately, it’s taken me this long to sharpen my game to this level, but here I am, and hopefully they can figure out what to do with me from here on out.”

If he keeps delivering wins like his most recent one over Johny Hendricks, there will be no holding him back. Winner of three of his last four, Boetsch has ended his last four victories over Hendricks, Rafael Natal, Josh Samman and Brad Tavares by knockout. And while he’s had his setbacks along the way, one thing guaranteed is that win or lose, he’s going to deliver a scrap.

“The response when people see that I’m on a fight card is that they always get excited, because they know that when I show up, there’s gonna be at least one good, knock down, drag out fight on the card,” Boetsch said. “I built that brand, at least. I might not be flashy, I might not run my mouth, but you know there’s gonna be a fight when I’m involved and the fans do truly appreciate that. Fans who have been following the sport for a long time give me quite a bit of respect, and I’m truly appreciative of that and I’m willing to do what it takes to maintain that level of respect.”

Putting an end to Carlos Junior’s four-fight winning streak would be a significant accomplishment, especially considering that four of his losses, including a February 2017 defeat to Ronaldo “Jacare” Souza, came via submission. And few are better on the ground than “Cara de Sapato,” a decorated Brazilian Jiu-Jitsu black belt. So to exorcise that demon, Boetsch doesn’t have to learn or hone an encyclopedia of BJJ moves, just enough to get him back to his feet or defend a submission if the fight hits the ground.

“That’s the obvious game plan for me,” he said. “There are very few guys that can match their opponent’s skill level. The only one that I can think of is (UFC flyweight champion) Demetrious Johnson. He’s a guy who will go in there and beat you at your strength, and I think that’s what him and (coach) Matt (Hume) do. They formulate a game plan and they go after your strength. For me, I like to study the opponent, find out what their strength is and just find out how to shut it down. This guy (Carlos) is an awesome BJJ guy and obviously his game plan is gonna be to drag it to the ground, climb on my back and choke me out, just like he’s done everybody else he’s fought. So I’ll learn a couple things, shut that down, keep it standing, put a big right hand on him early and sign the check.”

Boetsch is confident heading into Arizona, saying, “I’m feeling good and I’m ready to rock and roll. I’ve got a tough opponent in front of me, but I feel very capable of keeping that knockout streak alive.”

And hey, if we’re staying on the “old guy” theme, the last man to beat Carlos Junior – Australia’s Dan Kelly – is three years older than Boetsch.

“That’s right. I was very happy to see that. He’s got the old man Kryptonite.”