Illinois' Brian Ebersole always told himself to “be patient” when it came to getting a call to compete in the UFC.

Illinois’ Brian Ebersole always told himself to “be patient” when it came to getting a call to compete in the UFC. What he probably didn’t know was that such patience would take him through 11 years of competition and over 60 professional fights before he got that call.

Yet this weekend, Ebersole’s wild MMA ride will set down in his adopted hometown of Sydney, Australia, where he will face another veteran of the Midwest’s “Meat Grinder” circuit, Chris Lytle, on a UFC 127 card that the 30-year old hopes will be the start of something big for his career. See Ebersole's YouTube highlights 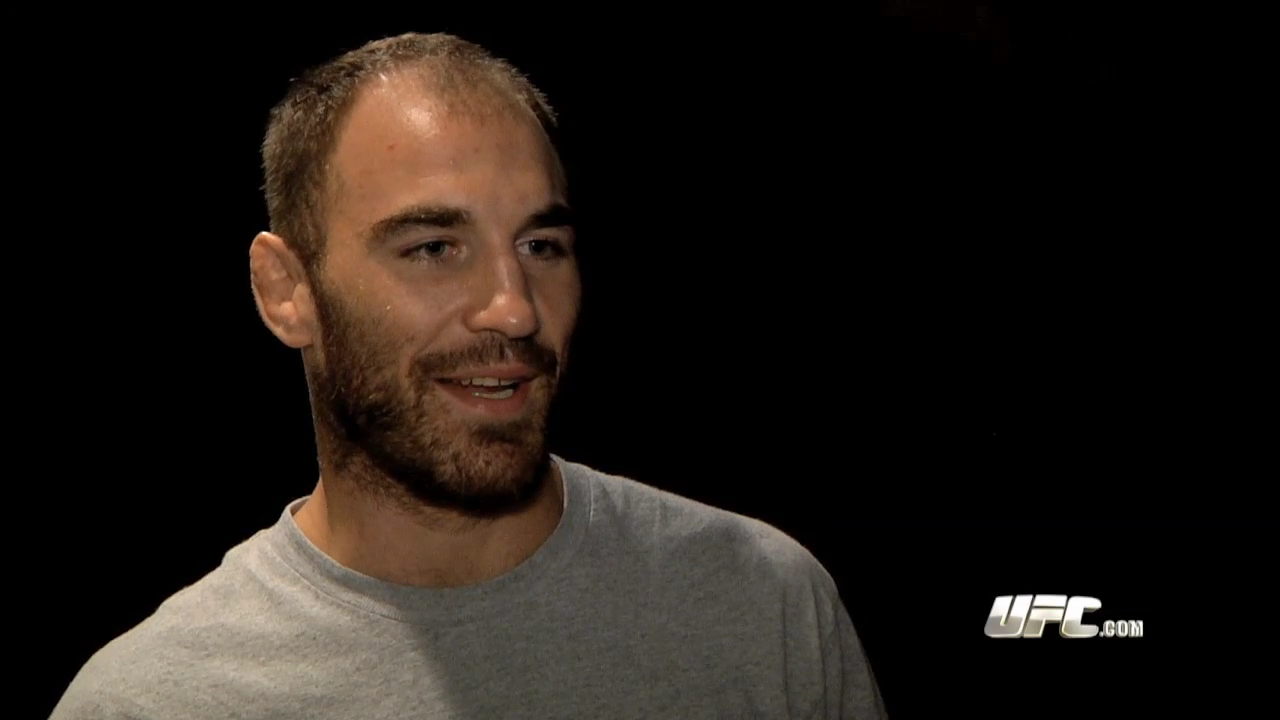 If anything, after not making last year’s Aussie card and missing the cut on season 13 of The Ultimate Fighter, Ebersole - who has won seven in a row - has earned his spot, and when Carlos Condit was forced out of the Lytle bout due to injury, he jumped at the opportunity.

“When I received word of the UFC offer for 127, I changed course immediately and worked to arrange the best training camp, which I did,” he said. “I didn't think about the future, or how I felt about it.  I was practical, and looked for immediate assistance in putting together the best two weeks that I could - as that's all I had available to work with.  So my reaction was to scramble, make calls, send emails, and hope that I would have talented training partners.  And it so happens that I was provided a great set of circumstances, in Melbourne, thanks in large part to the efforts of Kimekai Martial Arts Instructor, Ed Bavelock.”

With little time to prepare, Ebersole (46-14-1, 1 NC) has had his nose to the grindstone ever since in a race against the clock. But that’s when his years as a wrestler for Eastern Illinois University (the same school that produced UFC Hall of Famer Matt Hughes) and as an up and comer on the Midwest MMA circuit kicks into gear, and that’s experience that’s priceless when it comes to making magic on short notice because he comes from a time in the sport when fighting two or three times a night or a couple times a month was routine.

“Everything was different,” he recalls. “Nobody knew what a real show was, and there were little to no expectations going to an event.  Athletes were routinely matched up an hour before the event started.  The bouts were "pro", but the purses would barely cover travel.  Matchmaking never respected anything resembling a weight class, and there were very few places to train properly, besides a wrestling practice.”

“There was no medical staff, no event insurance (offered to the fighters anyway, but surely there would have been something in place for the venue), and gloves were always recycled from fight to fight.  Promoters would referee, announce, and judge their own event.  Once I witnessed a promoter do all three.  Contracts were unheard of, as many promoters pretended to be illiterate, or really were.  And every promoter lied to fighters about other promoters.  Every coach spat rumors about other coaches.  Every gym hated every other gym, but would rarely set bouts based on this "rivalry".  Oh, and it was more common for fighters to leave the venue after the weigh-ins, and not appear for their scheduled bout -sometimes due to being scared, other times because they were being lied to by a promoter.”

Yet through it all, Ebersole persevered, winning and losing in events called “Finke’s Full Contact Challenge,” “TCC – Battle of The Badges,” and “Combate Libre Mexico 2”. Along the way, he kept hearing the name of another up and comer who was on his way to big things, Chris Lytle.

“I'd met Chris on a number of occasions, and he was a topic of conversation at many events I'd attended through the Midwest,” said Ebersole. “Always a talented fighter, he was someone that we all knew would do well at the upper end of the competitive ladder, if given the chance.  For a while, most weren't sure it would happen - and he must have felt the same, because he took a foray into pro boxing. As far as fighting him years ago, I was never offered him.  And I believe I was fighting in a heavier weight class during that time.  I was always 185-plus, and I often fought at heavyweight.  Not my choice there, but in the Midwest, promoters do what they gotta do to make fights happen.”

In 2003, Ebersole relocated to California and began training with Frank Shamrock at the American Kickboxing Academy. The relationship paid dividends not only on the technical side, but it led him to a contract with the IFL. Before he could compete for that organization though, he had one more fight commitment to honor in San Francisco in September of 2006. Unfortunately, his original opponent fell out and he was matched up against journeyman Shannon Ritch, who Ebersole had already stopped in the first round in 2002.

Ebersole went on with the fight, which began with the “Bad Boy” being led to the cage on a chain held by a heavyweight female bodybuilder.

“One minute into my bout, Mr. (Armando) Garcia (Executive Officer of the California State Athletic Commission) was in my corner, barking at Frank Shamrock and my other cornermen,” said Ebersole. “He was not impressed with my evasive nature, nor my cartwheel kick attempt.  I can only assume that he would also despise the fighting styles of Muhammad Ali, Bruce Lee, and Lyoto Machida.”

Ebersole won the bout via tap out, but Garcia immediately questioned the validity of the bout, overturning the result and dubbing it a no contest, shocking much of the MMA world, including Ebersole, who thought he had put another victory in his win column. After not even getting the opportunity to appeal the decision with the CSAC, Ebersole had enough.

“I called an Australian promoter who had offered me a bout overseas, which I'd initially declined due to the IFL deal,” said Ebersole, who only fought once for the IFL, losing a 2007 decision to Alex Schoenauer. “I stayed in Queensland for two months, fought twice, and came back on the premise that I'd have an office job and a chance to compete from time to time.  I've since become a full-time coach, and a full-time athlete.  For the last four years, Australia has been home.  I've been able to travel back to the USA a few times, but have spent much of my time traveling throughout Australia.”

And since May of 2007, he’s become a mainstay in the Land Down Under, winning 11 of 12 bouts, with the only loss coming against middleweight standout Hector Lombard in September of 2008. So what was once an erratic journeyman-level career has now turned around, and at 30, Ebersole is hitting his stride.

“I was always fairly talented, and I've never been beaten up in a fight,” he said. “Nobody ever held me down and pummeled me, and I haven't had one fight that I'd be ashamed to watch with a group of people.  That said, the difference since 2007 is that I've been in the gym every day of every week.  I've been compensated for my time in the gym, so I haven't had to work another job.  Working a full-time job is terrible.  And for all the people out there that think it’s necessary, you've been fooled. I've lived on less than $22,000 a year my entire life, including California, where costs were ridiculous.  So being able to make more than that as a coach, while effectively tripling up on my training efforts, it’s easy to see why I've been successful.”

Another key to his success is that while he’s kept the dream of fighting in the UFC on his mind, he hasn’t obsessed over it to the point where he can’t enjoy the rest of his existence. And being in Australia has certainly helped his appreciation of the little things. So while he saw lesser fighters or fighters with little pro experience get a shot in the big show, he let it go.

“Without the UFC, I have been living a great life, especially since coming to Australia and reflecting on my past,” said Ebersole. “I'd had so many opportunities, due to my work ethic, kind speech, sporting success, and academic aptitude.  But I had not taken advantage of many of them to the fullest.  I relegated myself to doing just that when I was given my first job as a coach.  I had no complaints at that stage.  I was doing what I was good at, so there was no excuse to mess it up.  I'd always wanted to be a wrestling coach, and I had been given that opportunity through MMA.  With nothing else to do, besides train and lead others through their training - I finally had the simple life that I'd always desired.  No school work, no expectations from parents or family, and no financial pressure.  Just eat, sleep, train, live, and love.  Since late 2007, with a positive focus, I have done just that.  And it's paid dividends.  I've traveled the world, I've competed as much as I've desired, I've coached and trained almost every day, and I've had more and more control of my schedule recently.”

Then out of nowhere, the dream gig showed up on his doorstep. This weekend, he gets to perform on the sport’s biggest stage against one of its most popular welterweights, and if fans who don’t know Ebersole think this is a gimme for “Lights Out”, think again, because Lytle knows who he’s up against, saying recently, “He’s a veteran, he’s been around a long time, and one thing I’ve noticed about him in the past several years is that he’s hard to finish and he has an ability to make other fighters look bad. He’s gonna make you earn every second of a victory against him, so it’s gonna be a tough fight.”

“I thank Chris for the kind words,” he said. “And I've heard the same from a few other folks in the past few years.  I don't think that there's much of a secret.  I think it comes down to the fact that I can wrestle, so when I grab someone, they have to work hard.  And I have a way of keeping people off-rhythm.  I'm not there to play a certain game, or dance a certain dance.  I just want to play the game that is uncomfortable for my opponent, and keep their dance from looking so pretty.  Comfort breeds confidence.  Confidence breeds success.  I try to start from the root of the issue of success - way back at the level of comfort allowed my adversary.”

In other words, expect the unexpected from Ebersole this weekend. He’s been around this game long enough to know that those who adapt the quickest are the most successful. So in this chess game, he’s going to take what Lytle gives him and work with that accordingly.

“I have multiple personalities, and I don't always know which one will take the lead,” he said. “I fight from both stances.  I fight upside down sometimes, as the cartwheel kick attempts will attest.  I was a wrestler, I turned into a kickboxer.  I wore a wrestling singlet in a kickboxing fight.  I've been exciting, but don't mind being boring.  I've tried to make the fans cheer, I've encouraged them to boo, I've made them wait while I ran to the loo. But I put my soul, my body, and my ego on the line in each fight.”