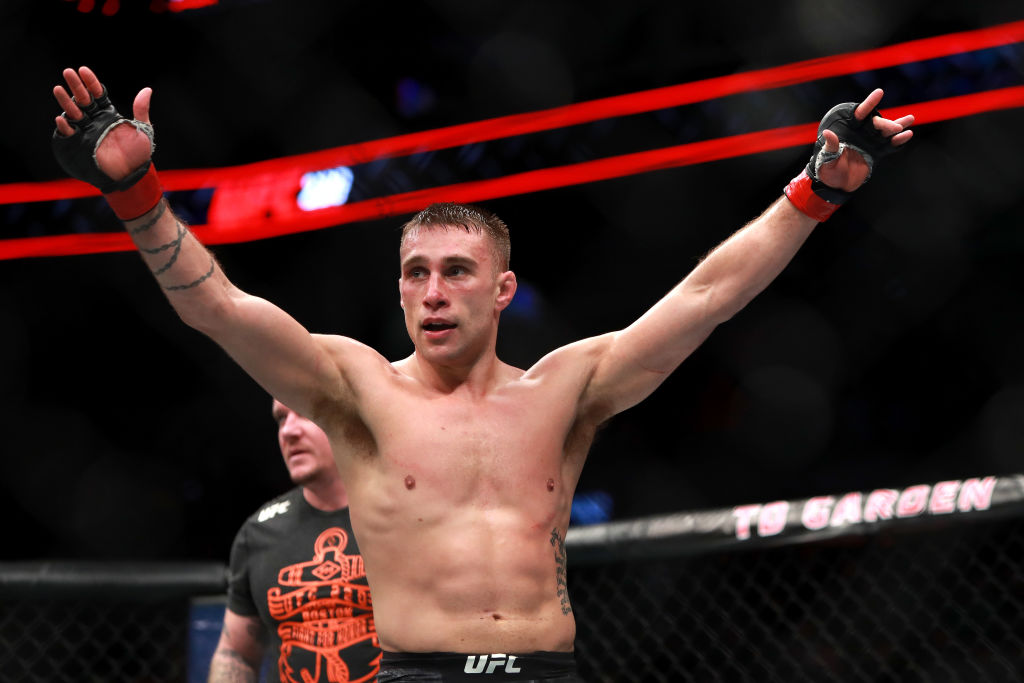 Kyle Bochniak reacts after the third round against Brandon Davis in their Featherweight fight during UFC 220 at TD Garden on January 20, 2018 in Boston, Massachusetts. (Photo by Mike Lawrie/Getty Images)" />
After a pair of Performance of the Night wins to kick off his UFC career, Zabit Magomedsharipov didn’t have a long list of fighters waiting to be the next in line to face him.

But Kyle Bochniak answered the call.

“I was honored to do it,” said Bochniak, who faces Magomedsharipov in Brooklyn on April 7. “I knew about five top 15 guys turned this fight down. I don’t know why, but I look at it like I want to fight tough guys. No risk, no glory. I want it to be a tough fight and I want everybody to doubt me, so when I beat him, it feels that much more rewarding.”

That’s real fighter talk. And it’s not surprising coming from Boston’s Bochniak, who was feeling that his job might be on the line just a couple months ago when he prepared to face Brandon Davis in January. At 1-2 in the UFC, a third loss might have been the ticket back to the regional scene in New England. But with his hometown fans at TD Garden cheering him on, he outpointed Davis, got a new contract, and now he’s breaking it in against one of the top prospects in the sport. So yeah, he’s got the same pre-fight feelings he did before fighting Davis.

“I always feel like my back’s against the wall,” he said. “I feel like a lot of people think I’m gonna lay down for this kid and I’m a stepping stone for him and a sacrificial lamb. It’s not like that at all. I think this is an opportunity for me to showcase to the world my true potential. And even if I had the belt and five, ten title defenses, I would still feel the same way, like I had to prove something to myself.”

So will he ever get a chance to exhale and enjoy this ride?

“When the window closes,” he laughs. “I’ll look back in 50 years and I’ll have some good stories. You always look forward to getting to the position where I’m at, and once you’re here, a lot of guys lose their hunger and then when it leaves, they want it back again. So I’m just trying to make the best of it right now while I can.”

Bochniak did get in a trip to Disney World before returning to the Noreasters of his hometown, and when the call came for Magomedsharipov, he signed on the dotted line and got back to work.

“Once you win a fight, that moment of celebration is there and it’s gone until the next one,” he explains. “So this is the next one, and I took it. (In Magomedsharipov) I see a kid who has mentally beat everybody before they’ve gotten into the cage with him. But I don’t underestimate him at all. He’s a very good striker, he’s very tenacious, has great grappling and he’s hungry. But I think I’m gonna be the hungrier, more tenacious fighter in that cage. My heart is gonna drive me through. Once he sees I’m not mentally beat already and I’m not backing up and I’m coming forward, I think we’re gonna see a different Zabit than the one everybody has in their mind, and then they’re gonna start rooting for the underdog.”

And if that underdog bites back and gets the win at UFC 223, let’s just say that sometimes, throwing it back at the doubters is almost as good as that win bonus.

“It is a lot of fun,” he laughs. “I defied a lot of odds growing up and I’m gonna defy a lot of odds on April 7. I look forward to that. I’m the type of person who’s always trying to get to the next level. I don’t know where it comes from, but I’m extremely driven and hungry, no matter what it is. If it was fighting, if it was owning my own construction business, whatever it was, I like challenges and it gets me out of bed and moving every day, it gets me to push and I feel alive. I’m living my life to the fullest, and I’m gonna face these challenges. My last fight was a big fight. I was 1-2 in the UFC and I needed to get that win in hopes of another UFC contract. For this fight and with this new contract, I want to make some waves.”