Bochniak aims to be relaxed and ready in Boston

Kyle Bochniak holds an open workout session on January 17, 2018 in Boston, MA. (Photo by Jeff Bottari/Zuffa LLC)" align="center" />The photo of blood-stained gloves that Kyle Bochniak posted on Instagram two days before Christmas told everyone what his profession was, but the real reveal was his comment, as he wrote “Most won’t understand.”

He’s right. Most won’t understand what makes someone fight for a living or why the sacrifices made to get to those fights are embraced by those who do it. Bochniak understands, though, and that’s really all that matters.

So as snow hit the New England area in the midst of Bochniak’s training camp for Saturday’s UFC 220 bout against Brandon Davis, it was just another reminder that hard work – in whatever form it takes - is part of the gig and something that can show up when most needed in a fight.

The most hostile environment but yet still the most peaceful. Most wont understand. #hardwork #UFC220 #passion#crash pic.twitter.com/GE0aPRNktk
— Kyle Bochniak UFC (@KyleBochniak) December 24, 2017

“It’s just about mental fortitude and getting the job done,” he said on Jan. 5. “I had two training sessions today and I just got done training now. I had to wake up an hour early to shovel my car out and shovel my wife’s car out so I could get to training in the morning. I keep a shovel in my car just in case I had to shovel my spot out in front of the gym. So it’s that extra little mindset of getting the job done is what I think translates in a fight.”

It’s nice to train in Florida, California or Las Vegas. Great gyms, great weather, and everything else you can think of. But training in New England adds a layer of difficulty, especially in the winter. Guys like Bochniak are used to it, so they don’t think about it much until the topic is brought up. And when it is discussed, he can laugh, knowing how it may look to the outside world that he works in real old school gyms that aren’t exactly trying to overwhelm their clients with amenities. In other words, there’s no juice bar in Peter Welch’s Gym.

“No juice bar,” laughs Bochniak. “Maybe some hand sanitizer, but that’s it.”

In gyms like Welch’s, or at Broadway Jiu-Jitsu, the fight is the thing, and to get ready to fight, you work.

“You’re working, no outside stuff and you’re done when you’re done,” said Bochniak, who embraces every minute of it. “You just get that vibe that it’s time to put in work. I really have that mindset all the time about getting my work in, getting the job done, pushing my limits and going home and sitting on the couch and going, ‘Damn, I put work in today,’ and I feel good about that. It’s more of a gritty, New England mindset. Shoveling out your spot, getting to the gym, nose down, do what you have to do to get to your job, whatever it is. Gas man, mailman, anything. You’re nose down, gritty and you get the job done. And for an athlete, it’s good to be humbled when you walk through the doors.”

This weekend, Bochniak steps into the Octagon for the fourth time, two years after his short notice debut against Charles Rosa in the same TD Garden that he will fight in against Davis. In his first three bouts, he’s won once and lost twice, this, after a 6-0 start to his pro career. It’s been an up and down ride, but he’s determined to make it all up from here on out. 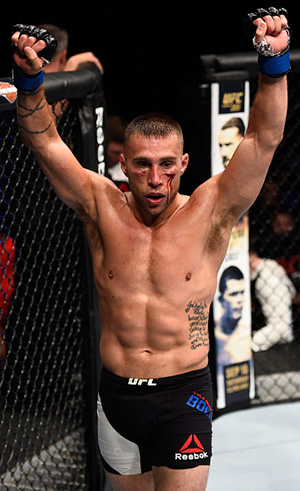 Enrique Barzola during the UFC Fight Night event on August 27, 2016 in Vancouver, British Columbia, Canada. (Photo by Jeff Bottari/Zuffa LLC)" align="right" /> “This is my chance to solidify my spot in the UFC,” he said. “My back’s against the wall right now and personally I’ve been underperforming. I’m way better than that in the gym. I was still growing as a mixed martial artist once I got into the UFC, so in that two years, I got in the door, I’ve been training with some good people now and I found myself as a fighter. I need to go back to my killer instinct ways and if I lose this fight, I feel like I might get cut, so if I win this fight with a good performance, I can get a second UFC contract, and that’s where my head’s at right now.”

I hear that and I laugh, letting the 30-year-old Bostonian that I get the impression that even if he was 10-0 in the Octagon, he would have that still “me against the world” attitude.

“I am that type of person,” he laughs in agreement. “It’s just the way I am. And I like it. I’m trying to get better every day, and it’s hard to relax.”

So what has been the issue keeping him from repeating his finishing ways in the Octagon?

“Once I got to the big stage, it was ‘Do I belong,’ ‘Are these guys better than me?’ I was crushing kids here, now I’m fighting the top kids in the world. But now it’s about being myself. I’ve built the confidence over these past couple years. I’ve got a lot of experience in the cage now. I’ve been in s**tty positions, I’ve been in good positions. I just need to stop overthinking stuff.

“I get paralysis by analysis,” Bochniak continues. “On the local scene, I wasn’t thinking, I was just reacting. I was being myself, like a killer, just seeing something, exploding and not stopping until the job was done.”

On Saturday night, that guy returns, and he will be following the mantra Welch has been throwing at him: