"I know he’s coming after me, which means I have to do the same to him. The better man will win." - Bobby Voelker 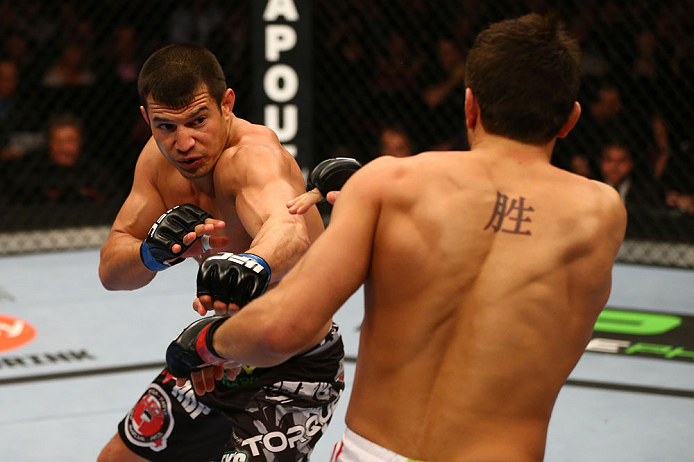 When opportunity came knocking, Bobby Voelker was quick to answer the door.

After an injury forced Siyar Bahadurzada out of his scheduled bout with Robbie Lawler at UFC on FOX 8 in Seattle this Saturday, suddenly there was a vacancy to be filled, and the Kansas City native didn’t hesitate to accept the position.

Coming off a hard-fought misstep in his Octagon debut against Patrick Cote at UFC 158 back in March, “Vicious” is eager to get his first win under the UFC banner. While the battle with Cote in Montreal put Voelker’s tenacity and heart on display, a unanimous decision on the judge’s scorecards brought his three-fight winning streak to a halt and pushed him to the back of the welterweight division, which has long been one of the promotion’s most competitive weight classes.

While Voelker may have lost the fight on the judge’s cards, there was a solid portion of the UFC fanbase that believed he had done enough to win the battle. Nevertheless, a loss on a fighter’s record sticks around far longer than the storm of public opinion and Voelker was able to take plenty of positives from the bout despite the outcome.

“You always want to get the win, but I guess if you are going to lose, that is the best way to do it,” Voelker said. “That is about the best way I can put it. It’s never good when things work out that way, but that is why they say never let it go to the judges. I tried to finish it, there just wasn’t enough time left. I felt if I had another 20-25 seconds the ref would have stopped it. Unfortunately I didn’t have those 20-25 seconds left and the fight went to the judges’ cards. The judges felt he did more to win, which I do disagree with, but they are the judges and I’m not.”

Voelker may have suffered a setback coming out of the gates in the UFC, but with the recent turn of events and a bout with Lawler now set in stone, Voelker will have the ability to take a giant step up the divisional ladder. Where a short notice date with the heavy-handed knockout artist presents some daunting challenges, the matchup also provides a tremendous amount of upside where Voelker is concerned.

The former Strikeforce title challenger is coming off an impressive knockout victory over perennial contender Josh Koscheck at UFC 157 back in February and the tilt in Seattle creates the perfect scenario for Voelker to make a statement in the welterweight ranks.

While every fighter would ideally want more time to prepare for a high profile bout against a dangerous opponent, the possible reward was simply too much for the Strikeforce transplant to pass up.

“My thoughts at first were ‘What’s the date?” Voelker recalled about getting the nod. “When they said July 27, I figured out it was like two weeks away and had a talk with my trainer about it. He said I definitely needed more time to prepare for a fighter like Lawler, but this is the UFC. When they come calling and asking you to step in for a fight you take it. I said let’s do it.

“There is a lot of upside in this fight and that is exactly how I’m looking at it. That is the way I have to look at it. I’m training my butt off to get ready for Lawler. That is all I can do and I’m coming in there ready.”

For the better part of the past decade, Voelker has built a solid resume competing in multiple organizations across the MMA landscape and has earned wins over a collection of talented fighters along the way. That being said, he’s never faced an opponent who possesses the caliber of destruction Lawler is capable of bringing to the cage and he is looking forward to testing himself in the line of fire.

Where Lawler’s aggression, power and the potential to put everyone of his opponents on a highlight reel have been enough to put past challengers on their heels, those elements have only served to make the upcoming dust up at UFC on FOX 8 all the more appealing for Voelker.

“I know he’s a powerhouse. His punches have power and he has that farm boy strength where he can just grab you and toss you. That is something I have to look out for. I’m a pretty strong guy myself, but his power is something I definitely have to look out for. I have to watch out for those hands of his and he has great leg kicks too. He’ll kick up high and bring it back down low. You have to go into a fight with him playing it smart but still being aggressive.

“I’m coming forward and I want to put him away,” Voelker added. “It’s the same thing for him. I know he’s coming after me because that is what he does every fight. He is a powerhouse right off the bat. In the past, I have tended to be a slow starter and I cannot do that with him. I cannot give him that edge off the bat. It’s going to be fireworks from the get-go.”