Bobby Green: Fighting for Something More 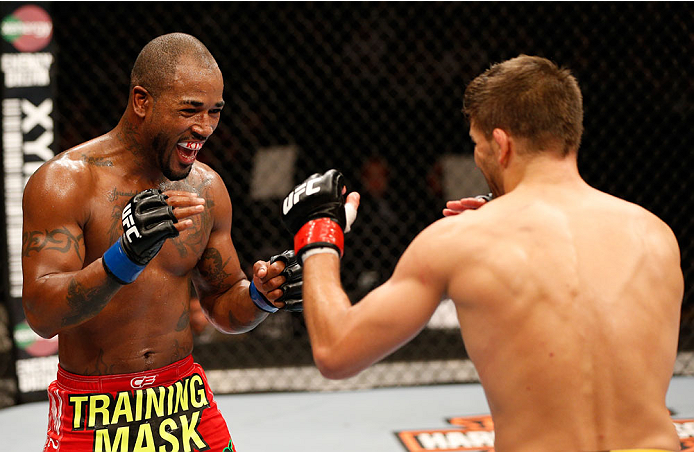 Every athlete that steps into the Octagon has his or her own set of reasons for competing. When it comes to Bobby Green, his motivations are both simple and complex.

Though three words can sum up the factors that propel the lightweight contender back into action this weekend – God, family, community – they also fall dramatically short of capturing exactly what it is the 28-year-old who bounced around through foster care as a child is trying to accomplish under the bright lights in the UFC.

“(This fight) keeps my mind busy a little bit so that I’m not sitting with all this time, thinking about it,” Green says of his impending date with Edson Barboza, a pivotal matchup that serves as the co-main event on Saturday night’s fight card in Austin.

“It” is the death of his younger brother, Mitchell Davis Jr., who was killed in a drive-by shooting on May 31 in San Bernardino. “It” is his older brother, Charles Gasaway, getting shot three times in September.

Less than two months after his brother’s death, Green stepped up on short notice to face veteran contender Josh Thomson, edging out the former Strikeforce champion by split decision to earn his fourth straight win in the UFC and eighth consecutive victory overall. While the bout was unquestionably an opportunity to further his career, he was more interested in having a chance to speak about his brother and the constant acts of senseless violence that were taking place in his community.

He said after the bout that he wanted to take the proper time to grieve with his family. Two months later, his older brother was shot and Green decided it was time to take action.

“With my two brothers being shot, I could have easily went crazy and got a gun and went crazy shooting people, contributing to the problem, becoming a part of the problem, but instead I’m trying to fix the problem,” Green offers, organizing a walk in October to raise awareness about crime and gun violence in the San Bernardino community where his brother was killed.

As his return to the Octagon draws near, Green isn’t sure if he’s taken the time to properly grieve for his brother and deal with the emotional situations that dominate his life beyond the UFC, but he won’t let that stop him from strapping on those four-ounce gloves and putting on a show this weekend at the Frank Erwin Center.

“It’s just an interesting thing to deal with. You can’t tell someone how to deal with death because we all deal with it in different ways. I want to say I grieved, but it doesn’t seem like it’s getting any better. My brother was my closest thing to me – he was my biggest fan. I protected him all my life as much as I could.

Speaking with Green, it quickly becomes clear that he’s an emotional person, deeply committed to making a positive impact, which stands in stark contrast to the way he is perceived at times.

Much like the Diaz Brothers, whom he trained with in preparation for this fight, Green tries to interact with his opponents during the fight – motioning them in, talking to them about the strikes they’re throwing and how little they’re landing. It’s equal parts strategy and showmanship, but many times, it is read as cockiness, which doesn’t make any sense to the 23-5 fighter currently ranked No. 7 in the 155-pound weight class.

“People have me as this big hard ass, but if you take just 10 minutes to listen to me, you can hear it in my voice who I am, but it’s so hard. Everybody has this bad idea of me.

“I’m a `show time’ guy – I love putting on a show. When the lights come on, it’s show time. People came to see a show, so I dance, I create all this energy to get people on their feet and excited. Some people take it wrong. Some people think it’s a cocky thing – that it’s me trying to feel like I’m better than people – but to me it’s a show. We’re here as entertainment.”

And his encounter with Barboza should be all kinds of entertaining.

A lightning quick Muay Thai fighter, the Brazilian brandishes some of the nastiest leg kicks in the division and is the owner of one of the most impressive knockout wins in UFC history – his third-round spinning wheel kick finish of Terry Etim at UFC 142. Having rebounded from his loss to Donald Cerrone with a first-round stoppage win over Evan Dunham back in July, Barboza is looking to break into the Top 10 with win, but Green has no intention of letting that happen.

“Edson is this Muay Thai guy and that’s great, but it’s one tool to me,” he offers in assessment of his opponent. “In MMA, you need more than one tool in your tool shed. He has some good kicks, good Muay Thai, but I can punch, kick, I can wrestle him, I can jits and he has to figure out what I’m going to do because I can do all three. Which one does he think I’m going to do, because we know what he’s going to do?

“A lot of these guys can’t change their style, but I’m Peyton Manning. We may have had a game plan for this fight, but I can audible and change the whole game plan because I’m experiencing something different in the fight. I have to change the game plan to what I’m seeing in the fight.”

While Green laughs at the idea of shouting “Omaha!” mid-fight, he does promise to bring a high-octane offense to the Octagon like the Denver Broncos quarterback does on the field every Sunday.

But as always, it’s about so much more than just putting on an entertaining fight and continuing to climb the lightweight ladder – it’s about God, family and community.

“A lot of these guys are not real – they’re fighting to get a paycheck and to go home and feel like they’re tough guys. They’re doing it for themselves. Fighting was my second job. This was not something I chose to do – it chose me and if I’m going to be here, I’m going to be as real as can be and say what’s the honest truth.

“I have to do something to change everybody’s future around me and that’s what I’m trying to do for my neighborhood, my family, my friends, my community. I fight for people. I’m from foster care – I have six different families. I can’t stop because of what I’m feeling and what I’m going through because there are still people that need to be fed.

“I’m here to help people. This is my opportunity to honor God when I get in the cage, so I honor Him with my tools. He blessed me with these gifts and here is my time to honor Him. If it’s not honoring God and making money for my family, it’s not important to me.”