This week we detail another one of the baddest fighters on the planet: Tony Ferguson
By Walker Van Wey • Oct. 7, 2019

When it comes to having a chokehold on the unorthodox, Tony Ferguson has the market cornered. It takes a special kind of fighter to have unanimous consent as a BMF with only two KO’s in his UFC career of 16 fights, but any fighter knows, “El Cucuy” is a special breed to begin with.

Special, unique, unorthodox, screwy, you can call the guy almost anything as long as you don’t forget to call him a BMF. If you don’t, we’re here to remind you why you need to. 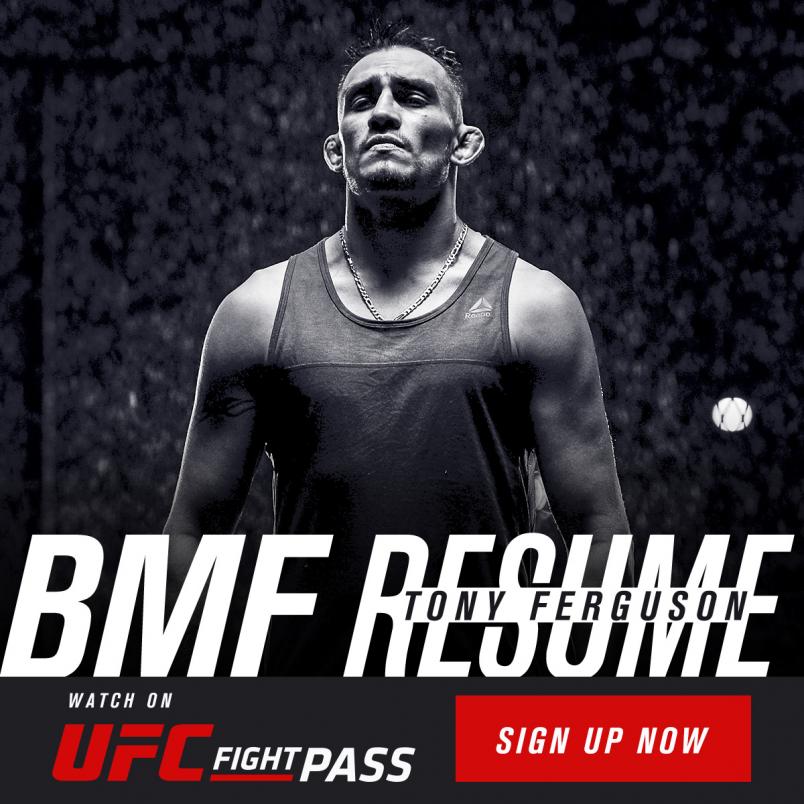 In the buildup of UFC 242 when Dustin Poirier and Khabib squared off to unify the interim and undisputed belts, both champs said flat out if they win, the next man to get a title shot would be Tony Ferguson. Giving no thought to a money fight, resume building fight or a legendary fight. Only the right fight.

When a fighter climbs the rankings, they’re only a win away from demanding a title shot from the center of the Octagon. El Cucuy has changed that in a way we’ve never seen before. It seems everybody in and around the 155-pound division is also conceding the rightful challenger for the title to be Ferguson as well.

“Tony Ferguson’s been there and he deserves the title shot, you know what I mean?” – Georges St-Pierre

“I want a real fighter. I want the winner of Tony and Khabib. I want to fight Khabib before he’s gone and if Tony wins, nobody’s going to miss that fight. We could put a million people in the stadium.” – Justin Gaethje

“Only Tony Ferguson, of course. I think he deserves.” – Khabib Nurmagomedov

“Tony Ferguson is next in line.” – Dana White

Notice a common trend? In a cutthroat business centered around jumping the line with any opportunity, Tony Ferguson’s clout has everybody laying out the red carpet for him. 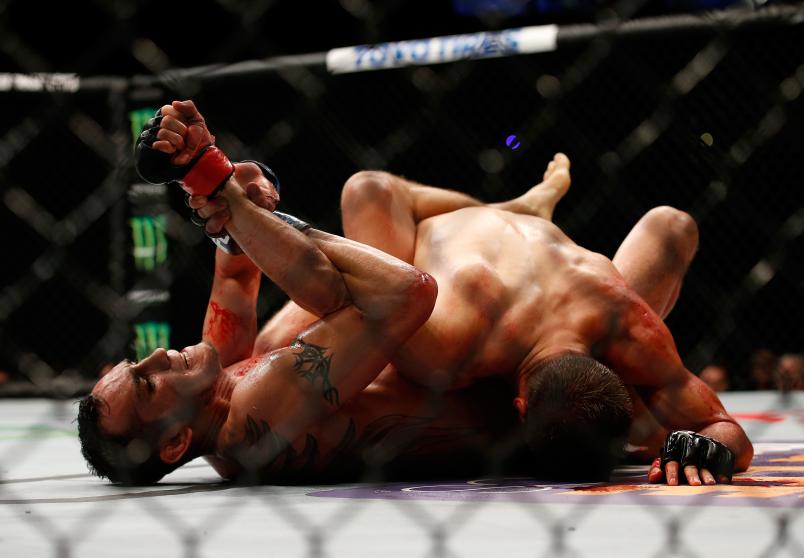 Circling back to Tony’s lack of KO’s. If you’re not fearing the KO, why would you fear Tony Ferguson?

To fight Ferguson, it’s important to always keep a few tricks up your sleeve because nothing is going to be enough. Each opponent has brought their best and while they may catch him, the pace will overpower any man across from him. When the pace becomes too much, desperation kicks in. When desperation kicks in, fighters question their heart all the while Tony is still coming.

One of the most creative strikers in UFC history, Anthony Pettis, learned this the hard way in their UFC 229 showstopper.

It took little time for Ferguson to fall into his usual groove of backing his opponent into the cage, tagging them up faster than hands can go up to block them. Before long, “Showtime” Pettis was cartwheeling to get away from the cage. His best along with his best creativity wasn’t enough and it was showing.

Fast forward to the second round where it was the same story until Pettis received a cut so bad doctors had to come observe. After giving the go ahead to continue, the first thing Pettis saw when the doctors stepped away was a menacing, blood splattered smile of Tony Ferguson waiting to terrorize him all over again.

If you aren’t ready for the hardest fought war of your life, mentally and physically, don’t take a fight with El Cucuy. 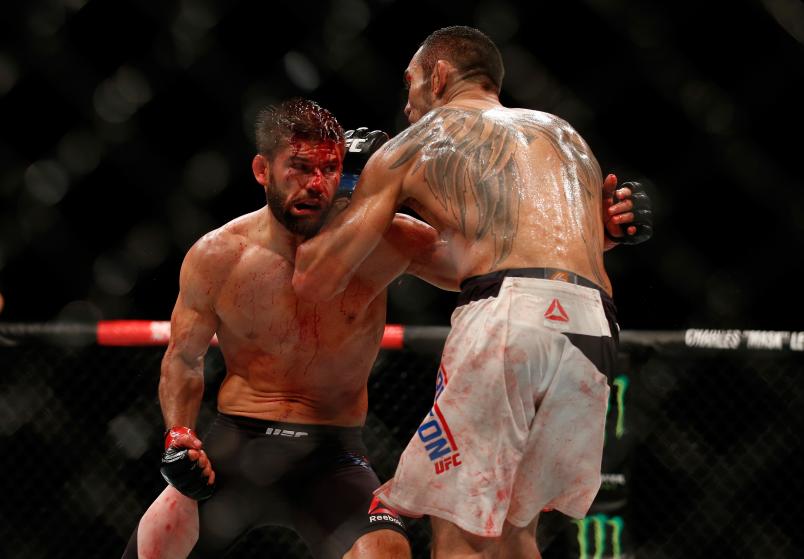 Hazard on his Back

The common scenario in the Octagon is a hard shot lands, a fighter drops to his back and it’s the beginning of the end.

Unless that fighter is Tony Ferguson.

Tony Ferguson is one of the only fighters whose ground game is possibly more of a threat when he’s on the bottom. It’s a formula that hasn’t been stopped in 12 straight fights and has barely been seen before. If it isn’t what he’ll do when you’re both on the ground, his danger from his back even ranges to when opponents are standing above him. Take the example of his preliminary battle with Justin Edwards in TUF 13. Finding himself on the ground, Ferguson landed an upkick that shut the lights completely out and advanced him to the next round.

Do you want to stand above him? No.

Do you want to take the bait and engage with him on the ground? No.

Do you want to stay on the feet and become suffocated by pressure? No.

There’s no good way to do it. 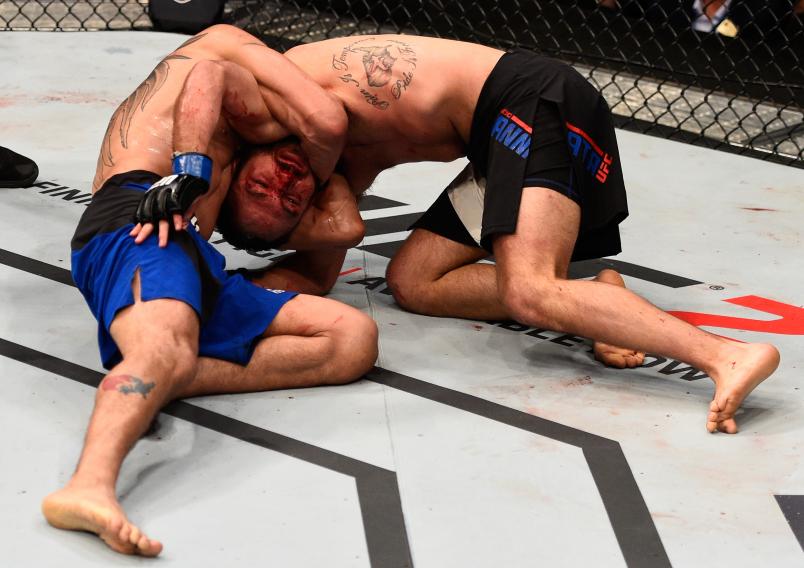 Anthony Pettis, Donald Cerrone, Kevin Lee, the list is far from over. They have all left the Octagon broken, bloodied and battered. The doctor had to save Anthony Pettis from himself and El Cucuy, a swollen eye due to operator error saved fellow BMF, Cowboy Cerrone, from further damage, a D’Arce choke to save Edson Barboza from further bloodshed and a clock saved many others who had no answer for the sharp, damaging strikes of Tony Ferguson.

Ferguson is proud of it as well. Take one look at his social media and it’s clear, he knows who the real BMF is. 12 consecutive wins against contenders, former champs and rising stars, he is well aware of the path of destruction he has left and he’s not going anywhere so lightweights beware.

You might end up in a different weight class by the time El Cucuy is done with you.