You’d have to have become a fan of the UFC a couple hours ago to not know who Robbie Lawler is, but for those who don’t, let’s dive into his resume and find out why he’s a consummate BMF.
By Walker Van Wey • Sep. 30, 2019

From the saloons to the alleys behind the bar. The next resume to look over is “Ruthless” Robbie Lawler.

Aside from “Submission Artists” almost no “Top 10” list of anything is complete without Robbie Lawler. He’s climbed, fallen, won, lost, but has never given the fans a boring fight. No opponent has left a fight with Robbie Lawler in the same shape they came in. For almost the entirety of the UFC’s existence “Ruthless” has been a name that has gotten fans excited.

You’d have to have become a fan of the UFC a couple hours ago to not know who Robbie Lawler is, but for those who don’t, let’s dive into his resume and find out why he’s a consummate BMF. 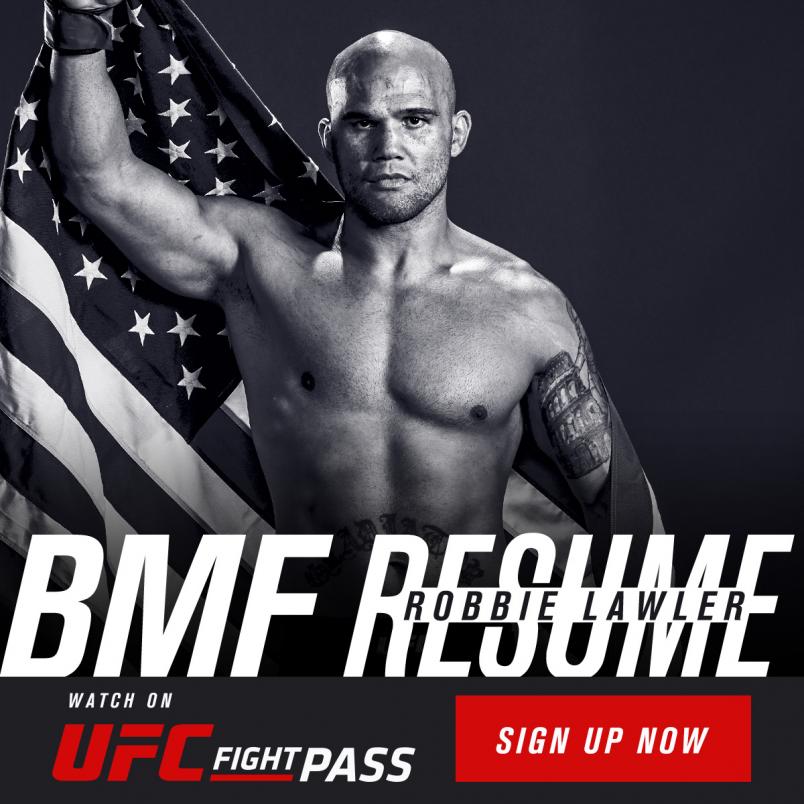 Lawler has been fighting so long that if you ask seemingly any fight promoter about him they can tell you first hand. Lawler is currently the second longest tenured fighter in the UFC making his debut just inside the Zuffa purchase with a 3 round beat down of 24-fight veteran, Aaron Riley at UFC 37. Unrecognizable now, the 20-year-old Lawler showed a pace and power that very few others possessed and left commentators almost speechless when much of the first round was spent discussing the legendary active career of Riley and the only impressive piece of his performance was staying conscious.

After seven fights in the UFC, Lawler left to make pitstops in every other major promotion including EliteXC, Strikeforce and even made a stop in Pride for a few seconds to knock out Joey Villasenor.

Lawler has been around about every block a few times. No matter where you’ve fought, if you weigh 170 or 185 pounds, you’ve likely feared bumping into Robbie Lawler at some point or another. 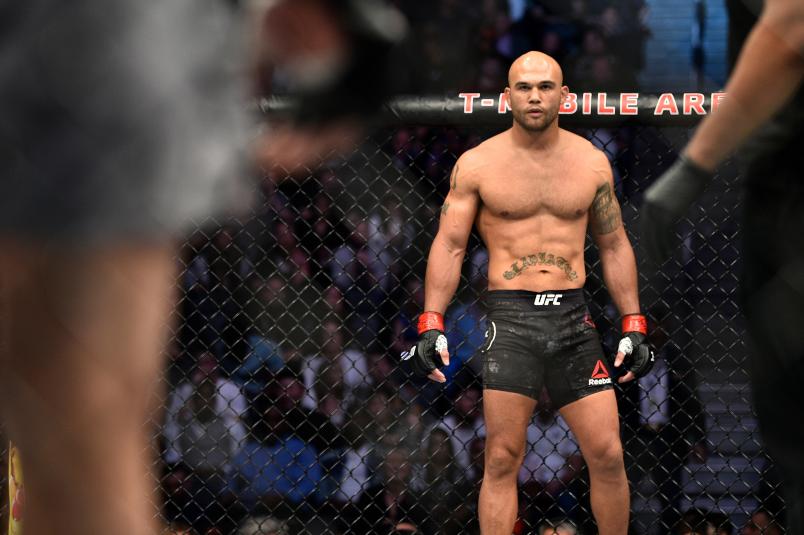 Robbie Lawler stands at a 28-14 (1) record. Of those 28 wins, only one time has Lawler submitted an opponent. To go even further than that, 20 have come by way of KO or TKO.

Lawler’s lack of submissions and high number of knockouts isn’t the product of a lack of a ground game. In fact, since his debut the word has been out that Lawler has one of the sharpest wrestling games out there. Robbie Lawler prefers to brawl.

In his classic bout with Rory MacDonald at UFC 189, Lawler displayed one of the most textbook sprawls on a failed takedown in the fourth round and didn’t look for the dominant position on the ground. Instead popped up and began swinging.

If there’s one thing that immediate qualifies Lawler it’s that he has made a successful career out of preferring to brawl. 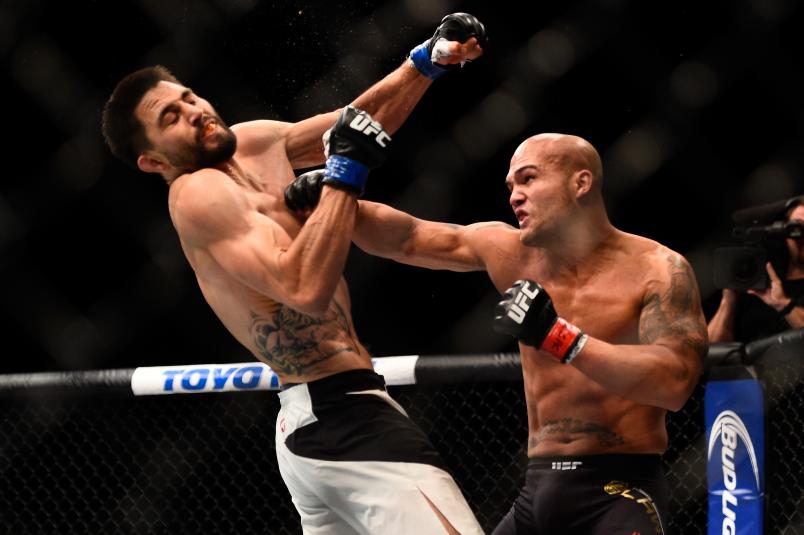 Robbie Lawler was kind of put in the category of, “exciting fighters” without being in the “top welterweight” categories when he came back to the UFC. His record, in his 2013 return to the Octagon was 20-9 (1) and only one submission win to his name proved that he still had a missing ingredient that may keep him from UFC gold.

Never one to fold to such criticism, Lawler went 5-1 with 3 stoppages and found himself in a title bout against Johny Hendricks at UFC 181. Lawler would not only beat Hendricks by split decision but would defend his title twice.

What we’ve learned so far, he knocks people out and wins championships and he’s been doing it for a very long time. 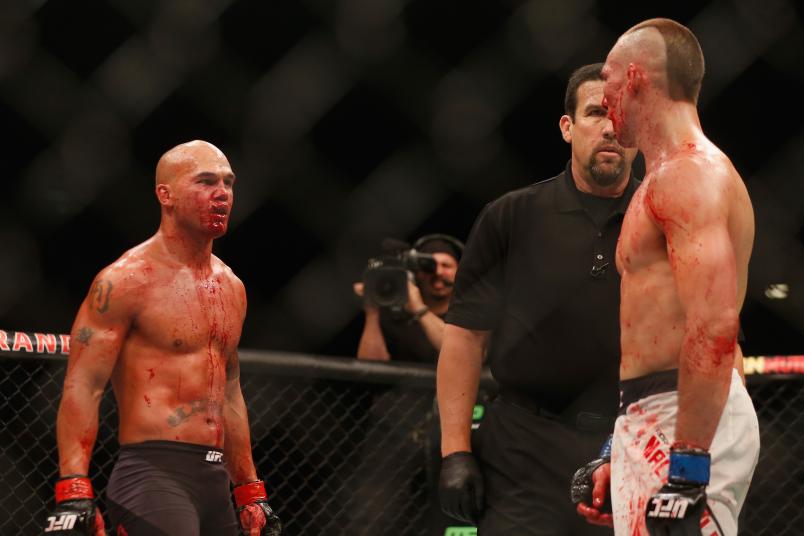 “Ruthless” has more classic knockouts than almost anybody in MMA history and he’s been at it for so long that performance bonuses weren’t even being given out during his first run in the UFC. Since his return he’s had five performance bonuses and Fight of the Year honors three years in a row against Johny Hendricks (2014), Rory MacDonald (2015) and Carlos Condit (2016).

No “Top 10 Greatest Fights” list is complete without Lawler’s crown jewel against Rory MacDonald in the co-main event of UFC 189.

MacDonald was 18-2 and seemed to be addicted to violence coming into the fight. As the -170 favorite, it seemed Lawler was in over his head in his first title defense. Lawler came out composed in the first round, not letting the crowd or his opponent see his hand just yet, in the second round the action picked up before the third round when hell was unleashed and it became an all time classic.

Both men rocked more than once, both men bloodied, and both men most likely in more pain than in any previous fight in their career.

The tide shifted at the end of the fourth round when MacDonald landed one last flush shot on Lawler, the horn sounded, Lawler sprayed a mouthful of blood out of his mouth and the two engaged in a stare down that dictated the winner itself.

Lawler had taken everything MacDonald could have possibly landed as hard as he could have landed. When Lawler stared through him, covered in blood and a mouth that was now also opening vertically, MacDonald was visibly out of ideas.

Now 37-years-old, Ruthless fights less than in his younger days but he’s still in fighter form to the point that ahead of his bout with Colby Covington at UFC Minneapolis, Covington accused him of using PED’s based on the premise that he’s in too good of shape for his age. His will to knock people out is still inside him and he’s still putting fear in any man weighing 170 pounds. While some fight for money and some men love to compete, men like “Ruthless” Robbie Lawler just love to fight.

Check out Lawler’s video resume and find out for yourself why Robbie Lawler still has the fight world buzzing, almost twenty years in! https://www.ufc.tv/category/bmf-resume-robbie-lawler