This week we detail another one of the baddest fighters on the planet: Justin Gaethje
By Walker Van Wey • Oct. 14, 2019

Most BMF’s earn their stripes with their urge to brawl. Justin Gaethje doesn’t sign the contract to do anything short of burning the barn down.

Only six fights in the UFC, a wrestling background and never fought for a title? What gives Justin Gaethje the pass to call himself a BMF? If he didn’t, everybody else still would. Justin Gaethje is possibly two or three fights away from having his face carved into the Mount Rushmore of violent brawlers twice. Here’s why. 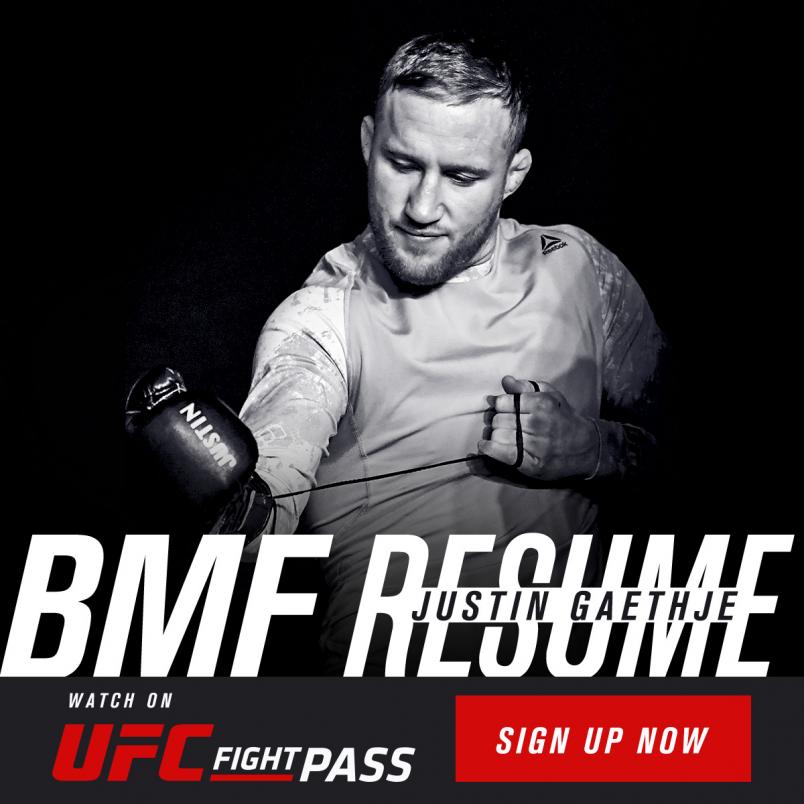 Once Amanda Nunes knocked out Cris Cyborg, women challenged her KO power. The second people started calling Jorge Masvidal a BMF, Nate Diaz challenged it. When Justin Gaethje calls himself the most violent fighter in UFC history, nobody, past or present, is chiming in.

With MMA, there are egos involved. Nobody is tougher than the person you’re talking to. To go completely unchallenged is almost unheard of. In fact, only Michael Johnson and James Vick have ever even verbally attacked Justin Gaethje.

And yes. They suffered dearly.

Instead of talking about the win accompanied by the performance of a lifetime in his fight with Justin Gaethje in the post-fight media scrum, Dustin Poirier listed off the injuries sustained by the heavy shots sustained by “The Highlight.” 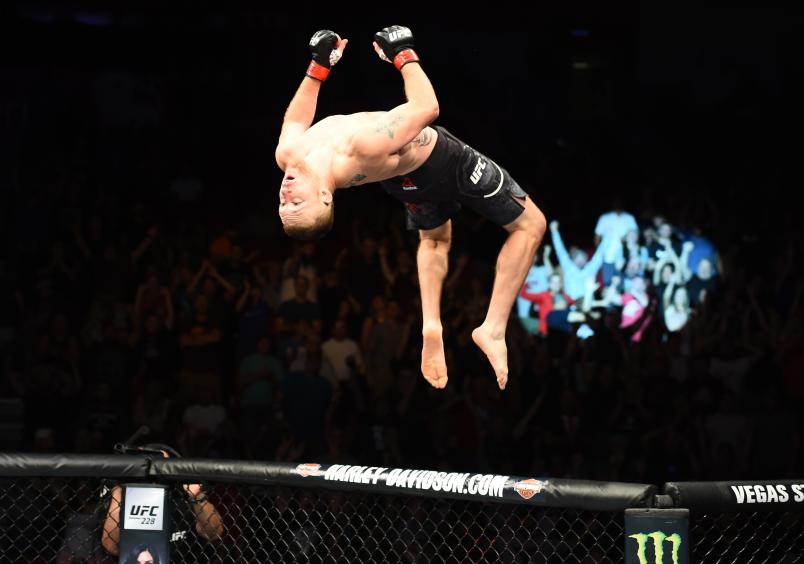 No BMF resume is complete without making mention of performance bonuses. Justin Gaethje is the only person in UFC history to score at least one performance bonus in each of his first six fights. To loosely quote “The Highlight,” he’s made more in bonuses than most fighters make from fighting. It’s almost a guarantee at this point. The only question is whether or not Dana White signs the checks in advance to prepare for the inevitable.

Gaethje’s show stopping ability is by ricochet effect hazing. To be a fighter making their UFC debut on the same card as a Justin Gaethje fight, no hard feelings but your odds of making an extra $50,000 just dropped drastically.

In Gaethje’s very highly anticipated debut, he was set to take on Michael Johnson in the main event of the TUF 25 Finale. The co-main event was the payoff fight between TUF contestants, Jesse Taylor and Dhiego Lima looking to change their lives forever with a standout performance to land the six-figure contract. Not only did Gaethje’s debut steal the attention from the TUF Finale, but his performance stole both fight of the night and performance of the night honors.

It doesn’t pay to try and make your mark when Justin Gaethje’s fighting. 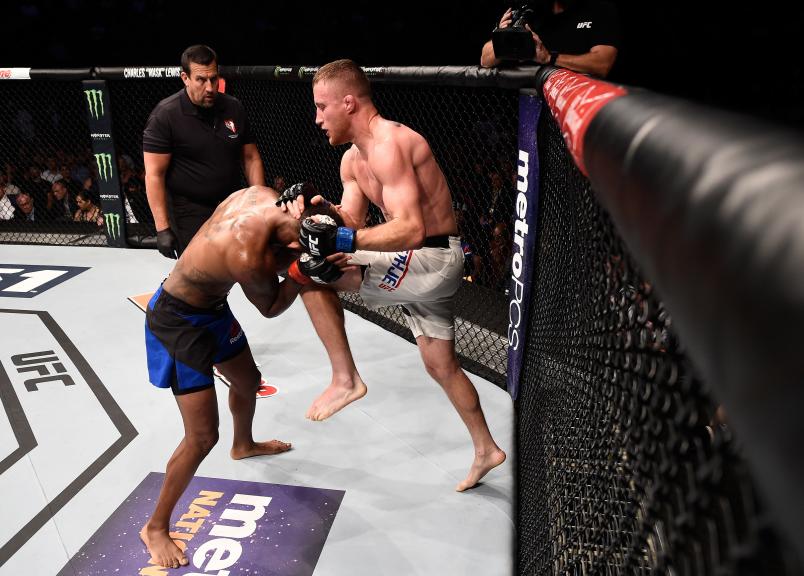 Before becoming World Series of Fighting’s first lightweight champion, before his MMA debut at all, Justin Gaethje was an All-American wrestler at the University of Northern Colorado. To break that down further, Justin Gaethje was one of the top 8 wrestlers at 157 pounds in the entire country.

Why has he never once used it?

“The Highlight” is either setting up the greatest trap in MMA history by keeping an 8-year trick up his sleeve for a rainy day or this is truly a man bred for brawling until one man can’t stand anymore.

What makes Justin Gaethje some more intimidating is that he’s 21-2 and climbing without ever using ground game at all. With one win by submission and only two by decision, the man has managed to utterly dominate the 155-pound division his whole career by using two weapons, cartoon-esque toughness and striking. 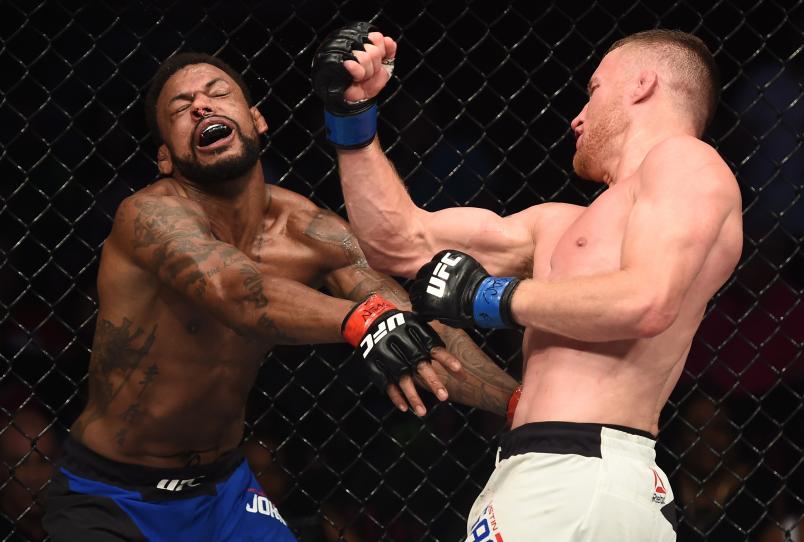 Actions speak louder than words so let’s break down Justin Gaethje’s fights one by one.

Gaethje’s UFC debut: Comeback of the Year, Fight of the Year. Rocked with some of the most flush strikes in Michael Johnson’s career only to land a KO blow with such exhaustion, it took multiple attempts to land his signature backflip off the cage celebration.

Gaethje vs Alvarez: World MMA Awards 2017 Fight of the Year. Even in a loss, Gaethje’s fight style was what made that Eddie Alvarez’s most exciting fight of his prolific career. It took a serious of fight ending blows and possibly a top three all-time knee to take out the man impervious to being knocked out

Gaethje vs Poirier: EVERYBODY’S 2018 fight of the year. One of the best matchups in UFC history. The unsung striker who has been around the block repeatedly vs Justin Gaethje. A man anybody can predict but nobody looks good against. The greatest brawl of 2018 and both men’s careers had everything but groundwork and half-speed. Even multiple eye pokes on both ends wasn’t enough to strip the men of their striking attacks or sportsmanship. It was fight of the year without having any prefight chatter to build it up. No ill will needed. Just everything Dustin Poirier and Justin Gaethje had to offer. Although Gaethje lost despite being 1 leg kick away from a TKO victory, per Poirier’s words, it was a career defining battle on both ends that showed that second best wouldn’t be good enough for either man no matter what.

Gaethje vs Vick: For the first time since his UFC debut Gaethje was being verbally attacked prefight and it was the same old song. Gaethje sat calmly while Vick dug himself a deeper hole. Although he coined the most appropriate nickname of all time when referring to Gaethje, “The Homer Simpson of MMA,” Gaethje landed his fastest knockout in 4 years. It doesn’t pay to think that just because Gaethje is predictable, means he isn’t a threat.

Gaethje vs Barboza: The brawl that had potential of being the most violent brawl in UFC history. Edson Barboza, fresh off the hardest to watch fight in UFC history where he treated Dan Hooker like his personal heavybag, against a… walking heavybag who was back in the W column. The man who strikes the hardest vs the man who welcomes the pain. Gaethje was staring down the barrel of yet another Fight of the Year award. Only issue, he’s too good. Gaethje knocked out Barboza inside the first round.

After the fight, Gaethje voiced his frustration with the UFC’s rankings naming fellow BMF, Cowboy Cerrone, by name.

Gaethje vs Cowboy: Another brawl that had the potential of being the most violent brawl in UFC history ended similar. Cowboy dished out and received the best strikes he could pack into 2:30 but yet again, Gaethje was just too much as he notched his 9th first round stoppage.

Now Gaethje is calling for the UFC title and with his stat sheet, it’s hard to argue against it. Tony, Khabib, start prepping for Justin Gaethje because title or not, he’s coming and he’s bringing a war because there’s flat out nobody who can survive the beatings Gaethje will.

He’s won by slam, he’s won by punch, he’s won by leg kick, doctor stoppage, elbows and more. Whatever can make a fight exciting, “The Highlight” has already done it better than your favorite fighter.

Check out the smallest, but most effective video resume so far. Tune in and wonder “how does he do this?” over and over and over again: https://www.ufc.tv/category/bmf-resume-justin-gaethje