This week we detail another one of the baddest fighters on the planet: Jorge Masvidal
By Walker Van Wey • Oct. 21, 2019

Real gangsters move in silence and violence. The presence of a BMF is felt, not heard. Building a fight is one thing but the last man to try and personally test Jorge Masvidal’s gangster, well… You remember.

This BMF has been letting the world know by the hundreds of thousands since back before there was advertising on YouTube. 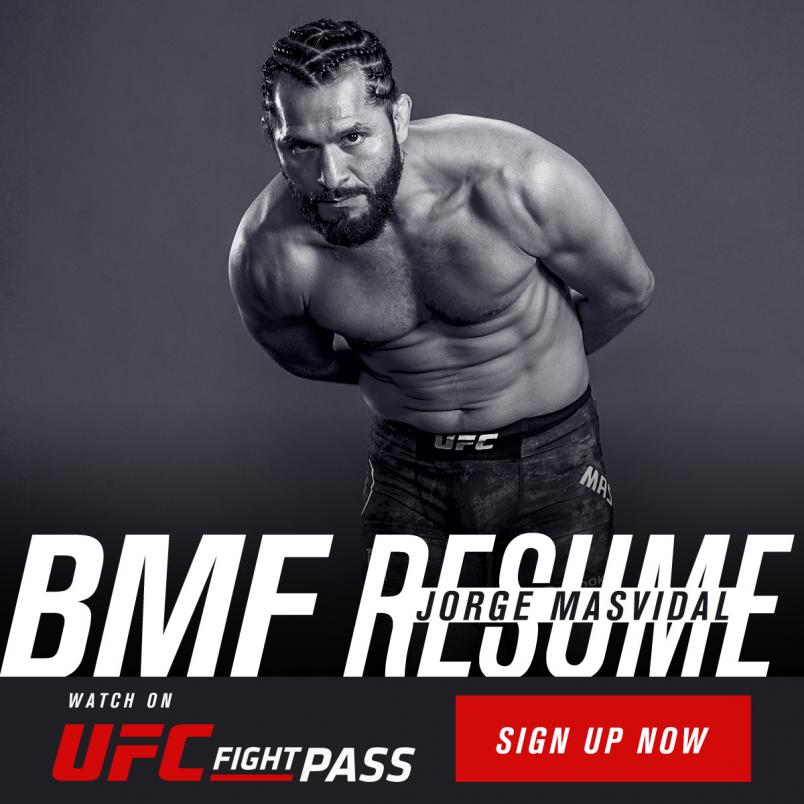 By early career we don’t mean when Masvidal took Raphael Assuncao to decision only to turn around and knock out Joe Lauzon in his sixth and seventh fight, respectively.

Before Twitch, SnapChat or Vine, YouTube was your one stop shop for almost any kind of entertainment. Random searches as far as the imagination could take a person took a lot of people down a street fight rabbit hole. The man who put a face to the nameless backyard fighters was Kimbo Slice. The hard-hitting, seemingly unbeatable Slice was seen destroying face after face barehanded in the back yard. Before long he was a household name and in the UFC.

His protégé, Ray, was thought to take over as the face of backyard, bare-knuckled brawls but come on. It isn’t a 305 party without Jorge Masvidal.

High-top shoes squeaking on concrete, jean shorts, ponytail and no shirt, Masvidal was a man among boys as he threw calculated strikes, circled, evaded punches and defeated Ray not once but twice.

The last king of the most brutal YouTube rabbit hole that stole the attention of the world in the mid to late 2000’s, Jorge Masvidal. 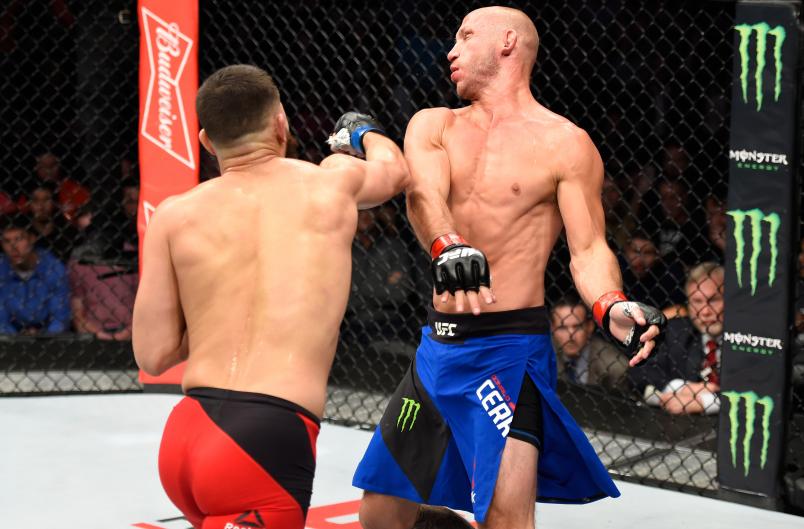 THREE PIECE AND THE SODA

You knew this one was coming.

Mid-interview, Masvidal found himself being chirped at by English welterweight, Leon Edwards. After a decision win over Gunnar Nelson, Edwards appeared to be trying to build his next fight when he set his sights on Jorge Masvidal despite “Gamebred” being preoccupied with a backstage interview.

Hands behind his back, Masvidal calmly walked over, didn’t wait for another word to be spoken. Landed multiple shots to the face of Edwards before both men were heavily restrained. After all was said and done, Masvidal did more damage to Leon Edwards in his three second retaliation than he received in three rounds of the co-main.

These days, it’s hard to find Masvidal without his hands behind his back and the smirk that says, “you saw what can happen.” 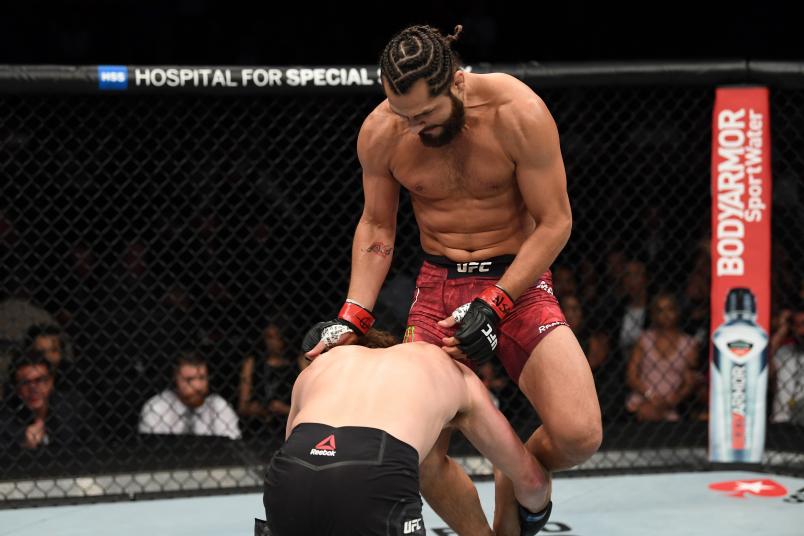 Ben Askren was an appropriately hyped undefeated champion of basically every promotion he’s fought in and a legendary college wrestler. With some of the best wrestling in all of MMA, Askren isn’t exactly winning fans over via flash. It’s his ability to build fights.

Witty, irritating prefight chatter is Askren’s weapon of choice. After peaking the fans’ interest by being the lovable antagonist, “Funky” fights his fight, wins and calls it a day. No hard feelings, on to the next.

That plan from beginning to end was a failure when he was slated to take on Jorge Masvidal at UFC 239.

Every small comment seemed to irritate Masvidal further and further. It was one of the only times anybody had engaged in verbal sparring with him and it wasn’t having the intended result. Most of Askren’s opponents become mentally overwhelmed and soon enough physically as well, Masvidal made a mortal out of the former Olympian.

At the faceoffs, Askren tried burrowing under the skin of “Gamebred” and something seemed off. Masvidal wasn’t dodging eye contact, wasn’t getting frustrated or appearing dominated. Fight night, he walked to the Octagon with a little more swagger than ever before. The grin just wouldn’t leave his face and we found out why.

When the fight had begun, Masvidal, hands behind his back took a second against the cage before running at an all out sprint and landing an earth shaking flying knee to a now completely stiff, Ben Askren. Giving himself enough time to land two “super necessary” punches to the unconscious head of Askren, Masvidal was the new record holder of the fastest knockout in UFC history at five seconds flat.

(Including the one second bounce off the cage and punches after the fact.) 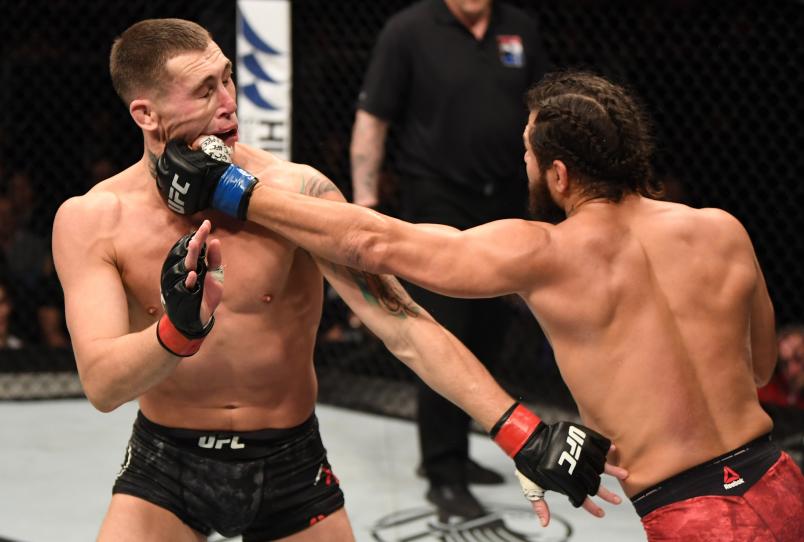 Nate Diaz was the hottest name in mixed martial arts, bar none, when he returned to take on Anthony Pettis at UFC 241. Diaz took home the unanimous decision win as if he’d never left. With everybody in the audience anxious to hear who he had on his mind. The popular opinion was Conor McGregor and somehow Diaz pulled out an even better name with an even better reason behind it.

“Jorge Masvidal had a good last fight. All respect to the man. But there ain’t gangsters in this game anymore, there ain’t nobody who does it right but me and him. So, I know my man’s a gangster but he ain’t no west coast gangster.”

It was just then that people realized this was the fight to make. Few people in the building thought to put that matchup together and even fewer were basing it off BMF merits. Nobody could resist salivating and with no hurdles in the lane, it was set. Not one to co-sign on any fighter not in the Nick Diaz Army, it was a compliment of the highest regards to be shouted out in the Octagon after one of the biggest returns in UFC history.

To understand and appreciate what it means to have Nate Diaz sign off on your street cred it would take a thorough examination of his resume as well. For that, however, you’ll have to wait seven more days.

While it’s hard to imagine more BMF qualifications would be needed after seeing his Scarface outfit, his Strikeforce fight from the Playboy mansion and backyard brawls, check out Jorge “Gamebred” Masvidal’s video resume ONLY on UFC FIGHT PASS!