If popularity and a self-attributed title weren’t enough, what more would qualify the gunslinger with 33 UFC bouts to his name?
By Walker Van Wey • Sep. 24, 2019

What resume is better to look over first than Donald “Cowboy” Cerrone?

For years Cowboy has been a fan favorite. He’s a graduate of WEC, fought for titles three times and is climbing the ranks again. He has more performance bonuses than anybody in UFC history and despite never holding a UFC title, he seems to be in everybody’s “Top 5.”

At first glance it would appear obvious that he belongs in the UFC elite list of BMF’s being that just to train with him, that very title is required at Cerrone’s New Mexico home and training facility known by all as the BMF Ranch.

If popularity and a self-attributed title weren’t enough, what more would qualify the gunslinger with 33 UFC bouts to his name? 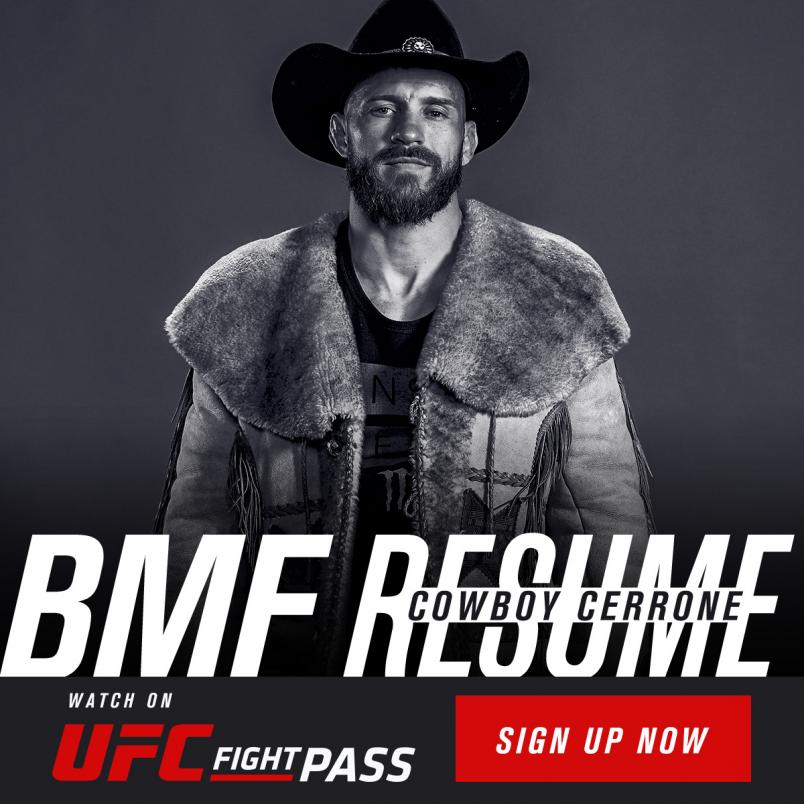 Cerrone shares the record for most bouts under the UFC banner with Jim Miller. What makes that more impressive is that Cerrone managed to reach 33 UFC fights after Jim Miller’s three-year head start.

Is he going through war after war for the money? No.

Even before Cerrone was fighting for WEC and UFC paychecks, he was still one of the busiest professional fighters alive.

Since his first professional fight in February of 2006, Cowboy has never fought less than twice in a year and moved from lightweight to welterweight for under three years but racked up more fights than some fighters amass in their career.

From journeymen to contenders, from prospects to gatekeepers, Cowboy has already cemented his place in history as the UFC’s Kevin Bacon. 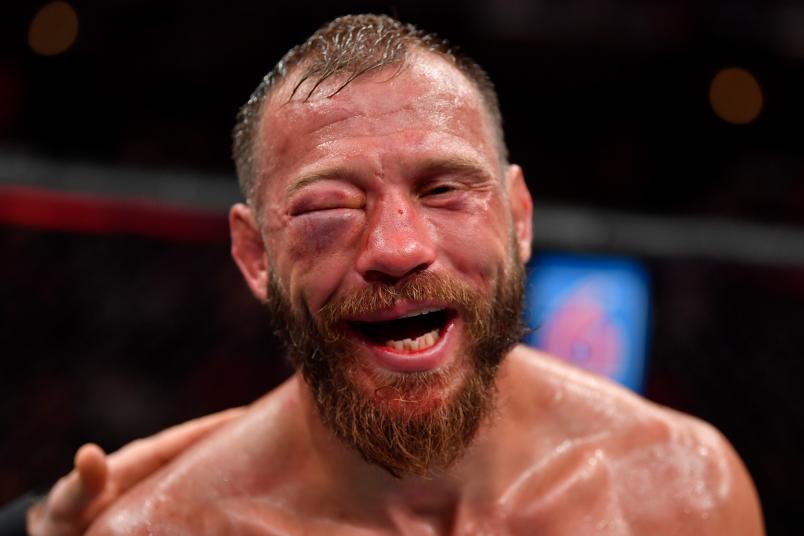 “Anyone, anytime, anywhere.” Words that most fighters claim they live by... until they compare their career to Cerrone’s. One fight he’ll be fighting a contender at the top of the rankings, in the blink of an eye he’s showing a climbing prospect that he bit off more than he could chew.

“Hey Cowboy, want to fight a prime Edson Barboza?”
“Sure.”

Less than four months later he’s back in the Octagon with Jim Miller.

“Hey Cowboy, want to fight Tony Ferguson? The hungriest fighter in the UFC and a man who could possibly end your title run?”
“Sure.”

Four months later he’s risking his title run again, sharing the Octagon with one of the most indestructible brawlers in the UFC’s 25-year history, Justin Gaethje. 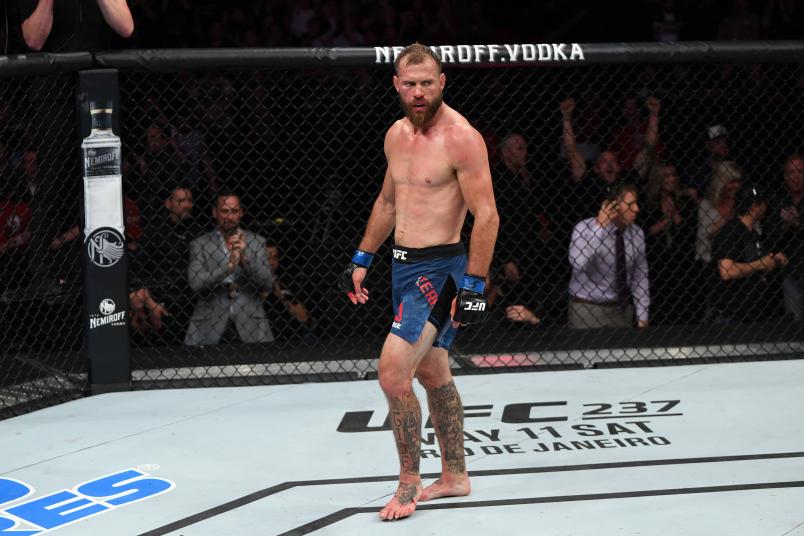 Since Cerrone’s UFC debut, some of the men most synonymous with warriors have been Robbie Lawler, Jeremy Stephens, Eddie Alvarez, Justin Gaethje, Tony Ferguson and Mike Perry.

Cerrone has fought all of them.

Cerrone has more performance bonuses than anybody to set foot in the Octagon and if you’re a casual fan who has only seen half of his fights in the UFC you’ve been treated to at least two performances that topped everybody else on the card.

In the most recent of memories, Cerrone has faced three of the most dangerous men in the lightweight division and twice brought home Fight of the Night honors. The man who is seemingly allergic to boring fights isn’t new to this, however. The casual fan is likely unaware that Cerrone has been stealing the show since his WEC days.

When Cerrone was matched up against former champion Robert McCullough, he said in his promo it was a war he was after. The then 8-0 (1) budding star got his wish in a fight that had all the elements of a stepping stone fight for McCullough.

Whether it was his pace, hand placement or ground game, it seemed Cerrone couldn’t do enough to impress the commentators who didn’t even bother to learn his name. Daniel/David Cerrone, as he was referred to, introduced himself officially to the WEC that night with a fight that sent McCullough into obscurity, himself into a title challenger and a warrior.

Both men wearing their own blood and finding themselves in fight-threatening trouble multiple times… In the first round alone, it was clear that WEC was introducing the world to a true BMF. It would be far from the last time Cerrone left fight fans asking themselves, “how is he still going?” 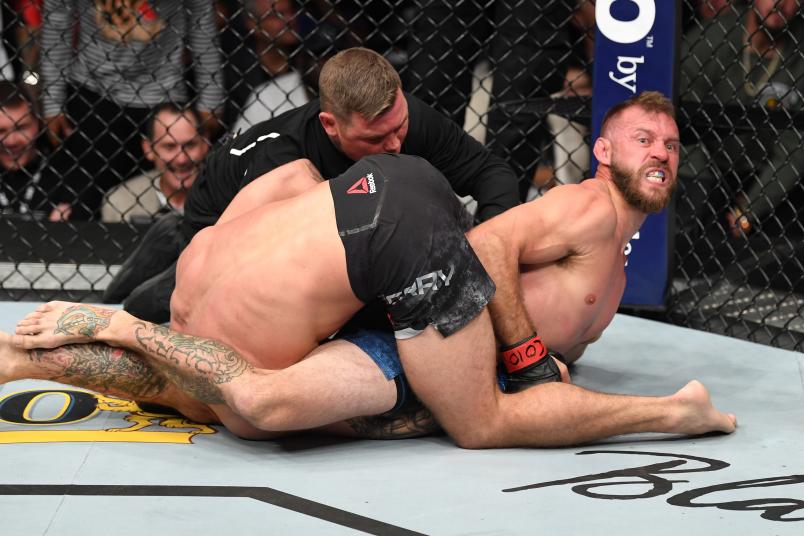 Hit CTRL+F on a UFC record book page, type Cerrone and watch the page fill up with yellow highlights.

Between the over-abundance of records and metrics, it’s impossible not to set some kind of record no matter how pedestrian the accomplishment may be. A fighter like Cowboy, however, skips over the child’s play.

Cerrone’s annual fight output, significant strikes, total bouts, total wins, total performance bonuses, knockdowns and many, many more prove that he’s a BMF even if somebody were to simply read statistics without ever experiencing it live.

No records are safe with Cowboy active. In fact, a mission of his is to nail down his legacy so hard that somebody would have to “fight seven times a year for their whole career” just to share the throne with him. A lofty goal for some but judging from his annual output that has never slowed down for the 36-year-old, it is likely to become a reality.

Nobody knows what exactly what the future holds for Cowboy but with a past that includes more Fight of the Night awards than anybody in WEC history, more performance bonuses than anybody in UFC history and the coining of the term “BMF” long before Masvidal and Diaz inked the contracts, Cerrone is a bona fide BMF by any fight fan’s standards.

Check out Cerrone’s video resume and find out for yourself why he’s known as the original! https://www.ufc.tv/category/bmf-resume-cowboy-cerrone