The Blueprint - Zombie vs. Poirier / Cerrone vs. Stephens 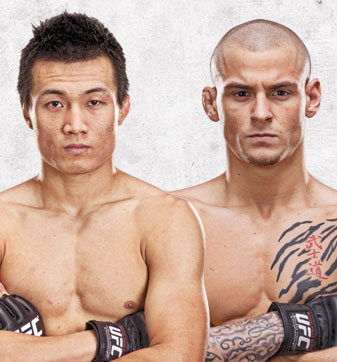 FUEL TV is rapidly becoming the perfect platform to help market some of the UFC’s lesser-known, but extremely skilled, talent. Tuesday night’s card in Fairfax, Virginia is no different.

The six fight main card is headlined by Chan Sung Jung versus Dustin Poirier, a match pitting two featherweights hoping to fight their way into a title shot in a division still seeking a full embrace from the viewing public.

Jung seemed like he was on his way to featherweight anonymity 18 months ago. After starting his career with nine straight wins, “The Korean Zombie” fell short in three out of his next four fights. That tough stretch culminated with a vicious knockout loss via head kick to George Roop in September of 2010.

The loss left Jung at a crossroads in his career. One more loss and he would undoubtedly be sent packing to the mid-major shows to reinvent himself. His next opponent was a man who had defeated him one year earlier, Leonard Garcia, a whirlwind offensive fighter with one of the sturdiest chins in the division.

Jung put forth what I think was a career-best effort against Garcia in the rematch. He not only beat Gracia; he did it via twister, becoming the first man in UFC history to end a fight with the Eddie Bravo invention. The Zombie followed that with a stunning seven-second knockout win over Mark Hominick in a bout most thought was a mere formality for the one-time title challenger. The knockout win was the second fastest in UFC history, just short of Duane Ludwig’s record.

Those two wins put Zombie right back into the 145-pound mix.

Poirier enters Tuesday’s fight with no such recent hiccups. He has never lost three out of four at any point in his career. In fact, he hasn’t lost three times as a professional. Poirier has only lost once and has since put together a five-fight winning streak, making him one of the entrenched featherweight contenders.

This is an intriguing fight because both men really are at their best when mixing it up on the ground in a transition jiu-jitsu battle. When two fighters are extremely evenly matched in one area of the fight, they often cancel each other out in that facet of the game. I expect that to be the case on Tuesday night, which means Zombie and Poirier will likely resolve this one on the feet.

Coming off of his seven-second knockout win, one that earned him “Knockout of the Night” honors, most probably believe that Zombie will enjoy an advantage on the feet, particularly since Poirier has yet to score a knockout win in four UFC bouts. I disagree. I think Poirier is the more technically sound striker. And I think that will be the difference in the fight.

Keep in mind that Hominick basically walked right into the punch that led to his near-record-setting loss. He had absolutely no respect for Zombie’s standup game. That hubris was his downfall. Poirier won’t make that same mistake.

Jung-Poirier is a tremendous matchup, both stylistically and in terms of division relevance, but the most intriguing matchup for my money will happen a couple of fights earlier when Donald Cerrone clashes with Jeremy Stephens in what could turn out to be the Fight of the Year.

Cerrone is nicknamed “Cowboy” because of his drawl, sprawling ranch in Albuquerque, love of boots and his ever-present hat. But this guy fights like a cowboy – a rugged, all-action and fearless warrior looking to tame the Wild West. In his last 13 bouts, Cerrone has won nine post-fight bonuses. Had the UFC-WEC merger occurred earlier, that would leave him one shy of the most all-time.

Anyone who read my pre-fight breakdown of Nate Diaz versus Jim Miller knows how I view post-fight awards. That is the one true gauge of how exciting a fighter is for the casual fan to watch. And Cerrone stands right next to Nate and his older brother Nick as the most exciting combatants in the UFC, in my opinion.

Stephens is no slouch in the excitement category. He was awarded four post-fight bonuses in his last nine fights. Forty-four percent would be an extremely impressive ratio, if he was fighting anyone other than Cerrone and his 69% ratio.

Putting two thrilling combatants like that in a cage together almost always produces amazing results. Tuesday night will not be any different. I guarantee it. Bold statement, I know. But I’m jumping out on a limb because there is one additional layer of intrigue to this matchup. Both men are coming off a loss, which means this fight is ultra important in determining their place in the pecking order of the crazy deep lightweight division. And that means these two will scrap for real, not wanting to take any chances that the judges rip a win from a pair of deserving hands.

In terms of the actual skill matchup, both men are amazing strikers, albeit very different. Cerrone is surgical with his fists, kicks and knees. He is a stick-and-move predator, rather than a foot-planting brawler. He rarely sits down fully on his strikes and throws with full force because it opens him up to unnecessary counters. The exception to that rule is when his opponent is hurt. Cerrone will go full throttle in that situation.

Stephens, on the other hand, doesn’t know how to fight any way other than full throttle with every strike. He is the personification of punches with bad intentions. His arsenal isn’t anywhere near as varied Cerrone’s. But he has very real show-stopping power in his fists, certainly more so than his foe. As a result, Stephens’ idea of “stick and move” is to hammer with bludgeoning blows and step forward with more. His lateral movement is often reserved for chasing his opponent, rather than retreating to reset his angle.

Cerrone needs to put his shots together on the feet to win. Stephens just needs to touch the other guy. That is what makes this such a fun fight.

To finish the skills comparison, Cerrone is the vastly superior ground fighter. He isn’t a great wrestler, so I think he will likely struggle to take the fight to the ground if he finds himself in trouble on the feet. But if it goes there, he has tremendous submission skills. Indeed, most of his wins have come by way of submission, despite the fact that he entered the sport as a striker.

I’m not sure that well-rounded advantage will help Cerrone much in this fight because of his lack of great wrestling. His best chance at using those skills will be to secure a clinch and work his way to his opponent’s back. That is an unlikely outcome, but it seems like his best chance for a submission.

But I don’t think Cerrone really cares about a submission in this fight. I firmly believe he will enter the cage fully intent on outstriking his opponent. He might not have the same juice in his strikes, but he has the skill to outclass Stephens on the feet en route to a unanimous decision win or a stoppage from an accumulation of shots. Then again, all Stephens needs is one opening to bring the action to an abrupt end.

Who will win? I lean toward Cerrone, but I’m not counting Stephens out by any stretch of the imagination.