The Blueprint: Silva vs. Stann 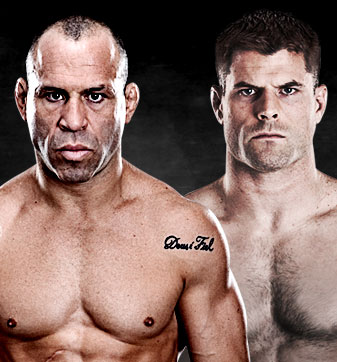 Wanderlei Silva will someday be remembered as one of the best fighters in the history of the sport. Fans who have only seen him compete in the UFC will never quite appreciate how truly great this guy once was.

Here is a little taste:

Each of those is a PRIDE Fighting Championships record that will never be broken because the Japanese promotion was shut down several years ago.

Silva is no longer the same guy who once ruled the Land of the Rising Sun as “The Axe Murderer.” At 36 years old and with tons and tons of fistic miles on his back, he is nearing the end of his illustrious career. We know that because he has dropped seven of his last 10 bouts.

Yet, he remains a seriously dangerous opponent. Just ask Cung Le. Silva savagely knocked him out two fights ago, and in his last bout against Rich Franklin last June, he nearly knocked Franklin out before losing a decision. Another win like the one against Le and Silva will likely continue competing. If he loses his second fight in a row, I have a feeling that the curtain will come down on one of the most exciting careers in the history of the sport.

Brian Stann, by contrast, is still trying to figure out whether there is more upside in a career that hasn’t quite reached the upper echelon of the sport. He is one of the best middleweights in the world as well as a former WEC light heavyweight champion returning to 205 pounds for this bout. He has a nice list of conquered opponents. But he hasn’t yet scored that one marquee win that has either earned him a title shot or cemented him as a headlining attraction.

Stann is 6-4 in his last 10. Like Silva, he is coming off a loss. But unlike Silva, he is only a win or two away from putting himself back in the title picture. A loss to Silva would basically eliminate him from title contention for the foreseeable future.

Yes sir, there is a lot on the line on Saturday night.

The one advantage that Stann has in this fight is he knows exactly how Silva will approach the bout. The legend only knows how to fight one way—berserker style.

Silva stalks the vast majority of the time. Every now and then, he will circle and retreat as he tries to bait an opponent into coming forward. Either way, he has only one goal in mind—violence.

“The Axe Murderer” completely eschews the jab in favor of crazy, winging hooks solely designed to bring the fight to an instant end. He throws those shots in bunches. Actually, a better description would be whirling dervish. Both arms move as fast and as powerfully as he can move them in search of a knockout. He only stops throwing when his foe is out of reach.

If he can work all the way to the inside, he refocuses his efforts on securing a Thai plumb. Equally aggressive knees are sure to follow, once the plumb is in place. And those knees are just as devastating—probably more so, actually—than his fists.

That style is perfectly suited for a standup bomber who likes to throw shots right down the middle. The shortest path between any two points is a straight line. When Silva wings those wild hooks, Stann can counter right down the middle, and his shot should either land simultaneously or first.

A decade ago, that wouldn’t have mattered because Silva’s chin and the speed with which he threw his shots overwhelmed opponents, even those with the cleanest standup technique. Today, firing down the middle with fast, straight punches is a big key to controlling Silva.

Of course, putting him on his back is another great way to neutralize the former champ. Stann doesn’t have the strongest wrestling in the division, but he is a much bigger, stronger man than the Brazilian. He may be able to drag him down, if he can survive an onslaught of knees from the clinch.

My guess is that Stann will seek to throw hands with Silva early, though takedowns will always be on his mind.

When throwing hands, Stann needs to be very careful not to retreat straight back. Silva’s winging hooks are very effective against guys who pull back with their chin up. Just ask Michael Bisping.

Stann has an exceptional chin. It is unlikely that a single punch thrown in isolation will render him unconscious, unless he simply doesn’t see it coming. With that said, all chins are breakable for a guy like Silva. Two or three shots on the button are certainly enough for him to turn out the lights on Stann or anyone else, even at this stage of his career.

Thus, I expect Stann to use lots of footwork to pop in and out of range. He will want to slam and then slide. Hammer and then hiatus. Bludgeon and then bail. Whatever and then whatever. You get the point.

If the fight hits the ground, it will be all about ground and pound for Stann. Silva isn’t going to submit him from his guard. No way. No chance. Stann knows that, so he can be aggressive with his fists and elbows on the ground. All he has to worry about is Silva working back to his feet.

Similarly, if Silva happens to stumble into a takedown of his own, which is highly unlikely, he will exclusively focus on raining punches from the top position. Submissions have never been a focus of his. That won’t change on Saturday night.

Taking all that into account, who is going to win this weekend? This fight has Brian Stann written all over it. He is the younger, fresher, stronger fighter. He also has more recent momentum, despite the fact that he is coming off a loss, just like Silva.

One would be foolish, however, to count out the former champion. He remains extremely dangerous for anyone who wants to stand and trade with him. Cung Le found that out, as mentioned.

In fact, Silva is more concerned with thrilling the crowd at this stage in his career than he is maximizing his chances at winning. His last two bouts—and three of his last five—ended in Fight of the Night performances. I would be shocked if Saturday night doesn’t follow suit (or at least win Knockout of the Night).