The Blueprint: Silva vs. Okami 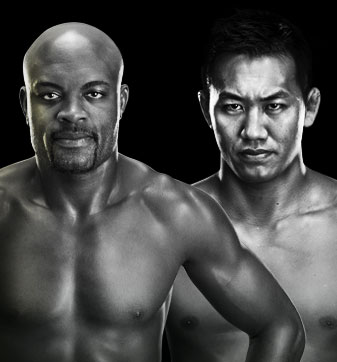 Georges St-Pierre is the face of mixed martial arts. We all know that, thanks to his Under Armour and Gatorade endorsements. He is also one of the most gifted fighters in the world. He would be the unquestioned king of the sport, pound for pound, but for one man.

Nicknamed “The Spider,” Silva is the UFC Middleweight Champion. But his accomplishments go far beyond that.

In fact, when Silva steps into the cage on Saturday night to defend his title for the ninth time, it will mark the 2,045th day since he last tasted defeat.  The night will be a historic one because it marks the first time in the Zuffa era that the UFC will hold an event in the motherland of the sport, Silva’s native Brazil. The champion will be extra motivated because this will be his first opportunity to perform live in front of his countrymen in nearly eight years.

Of course, there is another motivating factor for Silva that far outweighs the location of the event.  The last man to defeat him….wait for it….is his UFC RIO opponent, Yushin Okami. Silva may not admit it, but that loss has to burn white hot in his core. Not only because Okami has a win on his record over the champion. Also because it was, in Silva’s mind at least, a very questionable loss.

Let’s take a trip down memory lane for a minute.

January 20, 2006. Blaisdell Arena in Honolulu, Hawaii. B.J. Penn’s older brother, J.D., arranged a 175-pound tournament outside of the UFC for some of the very best fighters in the world. Silva and Okami met in the opening round.  It was a fight that most expected Silva to win, though he certainly had not yet developed into the seemingly unbeatable monster that he is today.

Silva obviously did not win. At 2:33 of the opening round, Silva delivered an upkick from his guard to Okami’s face. It would have been a legal kick, except for the fact that Okami had both knees on the ground. That made it an illegal kick to the head of a downed opponent.

Okami was visibly shaken by the blow. He was given time to recover from the foul and continue with the fight. Yet, when he informed the referee that he was unable to continue due to the blow, the Japanese fighter was awarded the win via disqualification.

It was a bout decided by a technicality. In Silva’s mind, Okami quit. He took the easy way out. In Okami’s mind, Silva cheated, and his cheating ways impaired his ability to continue at peak levels.

Whatever really happened, all will be made well on Saturday night, because these two gifted fighters will do battle once again. This time, Silva’s 185-pound championship will be on the line, as will his standing as the king of the sport.

No, Okami won’t be viewed as the single best fighter in the world, if he wins. He will be the new ruler of the 185-pound division. GSP will instead take Silva’s place at the peak of MMA supremacy.

In other words, there is a lot riding on the outcome of UFC RIO.

What makes this fight even more interesting from the fans’ perspective, is the fact that Silva’s biggest weakness just so happens to be Okami’s biggest strength—wrestling. And that could be enough to decide the fight. It almost decided the outcome of Silva’s toughest UFC fight today.

Back on August 7, 2010, Silva defended his championship against decorated former amateur wrestler Chael Sonnen. The fight lasted 23 minutes and 10 seconds. The champion was getting his rear end handed to him for nearly 23 full minutes. He was hopelessly behind on all the judge’s cards with two minutes remaining in the fight, after being taken down and pounded on for basically every minute of the fight leading up to that point.

Sonnen then made a mistake. He got sloppy with his ground-and-pound attack, over extending his punches while allowing the champion to move his hips high on his chest. That opened the door for a triangle choke, and in the blink of an eye, Silva turned what seemed to be certain defeat into the most exciting win of his UFC career.

Silva was unable to defend any of Okami’s takedowns on that fateful night. Afterward, the world learned that Silva suffered injured ribs heading into the fight, which arguably contributed to his inability to keep the fight standing. Sonnen scoffs at that notion, pointing instead to the champion’s lack of elite takedown defense as the culprit.

Okami certainly hopes that Sonnen’s assessment of that night is accurate, especially since he has been training with the world-class contender in Oregon for this bout. If so, he stands a very good chance of scoring a massive upset victory.

Okami is the definition of a grinder. He is a wrestling-based fighter with limited submissions, but excellent top control and effective ground and pound. He also happens to be a very big, strong middleweight, overpowering most opponents whenever the fight moves to the clinch.

What Okami does not do effectively is shoot for takedowns from the outside. He instead prefers to execute judo-style throws from the clinch. That could pose a problem—more on that in a bit—but Okami needs to do whatever he can to get this fight to the ground. He needs risk everything to put the champion on his back early in each round and then do whatever it takes to keep him there.  Why? Because that is the only way he can win the fight, outside of landing a proverbial lottery-winning strike.

Silva is a Brazilian Jiu-Jitsu black belt under the Nogueira brothers, so he is far from out of his comfort zone if the action hits the ground—not by a long shot.  Nonetheless, he does not want to find himself in that position. Sonnen’s Achilles’ heel throughout his career has been his submission defense, which is a direct result of his over aggressiveness on the ground.  That Achilles’ heel led to his defeat.

Okami, by contrast, has never been submitted. Not once in 32 professional fights. Thus, Silva should view winning from his back as a distant Plan C.

The keys to victory, therefore, are very straightforward for each man.  Silva must aggressively counter on the feet and use good lateral movement to try and keep Okami from cutting off the cage and tying him up.  If he finds himself nearing a clinch, go ahead and attack in traditional Muay Thai fashion by doing what he does better than any man in the UFC—grabbing the back of Okami’s neck and bombing knees to the body and chin.  Okami may not have a demonstrable weakness for submissions, but he has no answer for Silva’s Thai attack in the clinch. I’m certain of that one.

If the champion finds himself on the ground, he should utilize his tremendously long legs to lock up a body triangle. That position will largely stalemate Okami’s ground and pound attack, while allowing the champion to squeeze some of the conditioning out of his foe.

Note, however, that a body triangle is only a temporary answer. Silva cannot win the fight from that position because submissions are almost impossible from that position. Once he Okami under control, he needs to open his guard and stand up.

Despite Okami’s penchant for ground and pound, he has never shown the ability to submit a high-level opponent with his jiu-jitsu skills. It is highly unlikely that Silva will be the first to fall prey to an armbar, triangle choke, or God forbid, a gogoplata. So, there is no real risk for Silva opening his guard and working feverishly to get back to his feet in order to avoid losing round after round on the cards by fighting from his back.

As mentioned, Okami has but a single key to victory:  takedowns.  He knows that he cannot out strike Silva.  Sure, any man can score an improbable knockout. It is equally true that Silva knocks out Okami 99 out of 100 times, if the two engage in a standup-only fight. Actually, it might be 999 out of 1,000.

In order to maximize the odds of scoring a takedown, Okami should slowly try to walk Silva to the cage. Remember that Silva greatly prefers to counter. If Okami cautiously approaches with his hands held high, Silva will bide his time while retreating or circling. Once Silva is anywhere near the cage, Okami should throw caution to the wind and close the distance with unabashed aggression.

Granted, he may get his lights turned out during that charge, but do you have a better idea for getting Silva to the ground?  Approaching behind strikes is a bad idea.  Silva will destroy him in that scenario.  The better approach is to feint while rushing in.  Silva’s traditional reaction to every aggressive lunge forward is to take a step backward and then fire.  If he steps backward into the cage, it will cause him to hesitate, even if only briefly, as his mind processes the change in the environment and recalculates how to counter.  Okami must take advantage of that hesitation by finishing executing a takedown or throw by any means necessary.

Just like in the Sonnen matchup, this is Silva’s fight to lose.  He is the rightful betting favorite.  Okami is a serviceable boxer, but he will be severely risking his personal safety each time he presses forward for a takedown.  That is a terrifying thought for a guy whose best chance of winning is by scoring multiple takedowns.