The Blueprint - Shogun vs. Vera 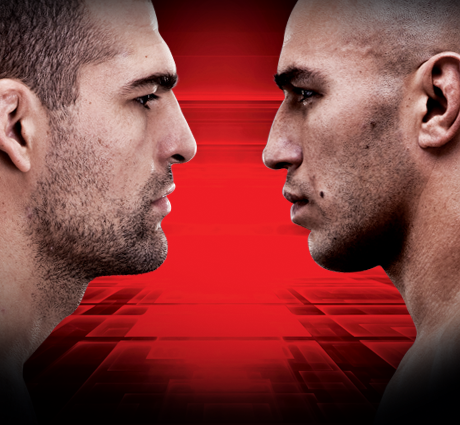 I remember it like it was yesterday. I was in Sacramento, California, which was just a short drive from my then home in San Francisco, to help cover UFC 65 for UFC.com. My job, as always, was to write an op-ed piece in reaction to what went down.

I was sitting at lunch with my editor and good friend, Thomas Gerbasi, enjoying one of Sac-Town’s football-sized burritos, when our conversation turned to the night’s matchups. Gerbasi and I love to wager cheeseburgers on our ability to predict the outcome of the fights. I think I’m down enough cheeseburgers to solve world hunger. I digress.

When the conversation arrived at the second televised bout of the night, we quickly moved from breaking down the matchup to pontificating about the upside potential of Brandon Vera. He was facing former champion Frank Mir in what was definitely the biggest fight of his career. It was a fight that would definitely demonstrate whether the hoopla and hype surrounding this guy was just that, or if he really was “The Truth,” as he likes to call himself.

Sixty-nine seconds into the fight, the world learned the answer to that question, as Vera obliterated a guy who has gone on to become one of the most accomplished heavyweights of our era. Vera was on top of the world after UFC 65. He was a heavyweight champion in wait, and a guy who many believed could actually hold both the light heavyweight and heavyweight crowns simultaneously.

Crazy talk, I know. But Vera had that sort of aura surrounding him at the time. He was every bit as exciting of a prospect as current superstar Jon Jones was before the current light heavy king won the title.

And then it all came crashing down.

Vera lost three of his next four, and six of his next nine, if one counts the savage beating he took from Thiago Silva in their no contest as a loss – I do, by the way. I can’t think of a more spectacular fall from grace by someone with that much potential. I’m not sure what happened. I’m not even sure if Vera knows what happened. But it happened.

Humbled and on the verge of needing a career change, Vera figured out how to right the ship against Eliot Marshall in a yeoman’s like effort last October. Now, he is back in the spotlight with the opportunity to erase all the heartache he has experienced over the last nearly five years.

On Saturday night, Vera will fight on national broadcast television in what will certainly be the biggest stage of his career. He will face former UFC and PRIDE champion Mauricio “Shogun” Rua in the main event of the fourth live broadcast by FOX.

Make no mistake about it. This is supposed to be a feature bout for Rua. After all, he is squarely in the middle of the 205-pound title picture. A spectacular win over Vera may very well put him next in line for the winner of September’s title fight between Jones and Dan Henderson. But this is far more significant for Vera. This is a make-it-or-break-it moment for him. A solid performance keeps him relevant. A win skyrockets him into title contention. And a bad loss probably has him doing a bit of career evaluation.

How is that for pressure?

Let me add to it. Shogun is one of the most fearsome standup fighters that the 205-pound division has ever seen, and Vera prefers to compete on the feet. But the two are stylistically so very different. Let’s break that down a bit.

Shogun is a maestro at what most consider to be fistic chaos. That is a trademark of many current and former Chute Boxe Academy fighters. That is a gym that focuses on exceling when the action devolves into an all-out brawl, rather than a highly technical sporting event. And Shogun may be its best graduate.

The Brazilian wants to fight Vera. He doesn’t want to play the stick and move game, though he is great at that, too, as he proved in his two fights with Lyoto Machida. But he prefers pressure. He prefers to become a berserker inside the cage. And Vera is going to have to deal with that.

Vera, on the other hand, is a tactician’s tactician. He is a master of the outside leg kick. He has a great right hand, and excellent left hook, and a solid understanding of angles and movement. He is an amazingly technical kickboxer. But he hasn’t always shown the greatest degree of comfort in the face of elite skills combined with tremendous pressure.

If Shogun can devolve the action into a fight in a phone booth, both men have the skills and power to win by knockout. Yet, Shogun probably wins that type of fight more often than not. If Vera can keep the action to more of a stick-and-move kickboxing bout, he will do very well.

Forget takedowns. Vera is the far better wrestler. He won’t be taken down by Shogun, unless he is asleep at the wheel, and he should be able to get the fight to the ground, if he really wants to. Shogun is the better ground fighter from all positions. The difference is glaringly apparent when comparing their guards, but Shogun has the edge in all positions.

Thus, it is likely that Vera won’t seek to take the fight to the ground, and Shogun probably can’t get it there, even if he wants to. So, this fight will be determined on the feet.

Normally, I would lean heavily toward Shogun in a matchup like this one. He is the more accomplished fighter. He has performed better over the last several years. And he has more ways to win.

But Vera is no stranger to rising to the occasion when facing a world-class fighter. He destroyed Mir, as mentioned. And many thought he got robbed when the judges awarded Hall of Famer Randy Couture a unanimous decision victory in their 2009 bout.

Call me stubborn, but I can’t let go of Vera’s vast potential. Five-year struggles notwithstanding, this guy has as much potential on paper as anyone in the game. I keep thinking the next fight will be the one where everything clicks for him. Maybe that will happen on Saturday night. Maybe not. But I’m not betting against him.