The Blueprint: Rousey vs. Carmouche 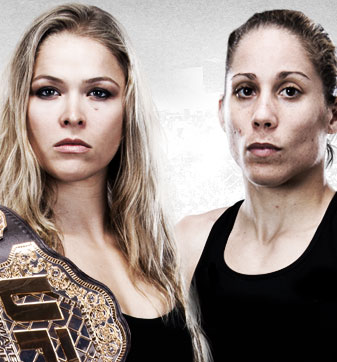 Say hello to the ladies.

On Saturday night, female athletes will compete in the UFC for the first time in history. That is reason enough to tune in, though it is far from the sole reason.

UFC 157 is full of great fights. The main card features “Ruthless” Robbie Lawler’s return to the UFC after nearly a decade fighting elsewhere. It also marks his return to the welterweight division – the same division he competed in during his last UFC stint. His opponent, Josh Koscheck, is one of the best the division has to offer. A win by Lawler makes him instantly relevant in the division. A win by Kos reminds the world that he isn’t going anywhere any time soon.

Former TUF winner Court McGee faces Josh Neer. Anyone who loves a knock down, drag out war should tune into this one. These guys don’t know how to do anything other than go to war. That is why this fight is my early pick for Fight of the Night.

Urijah Faber and Ivan Menjivar will clean up some unfinished business. The pair first fought back in January 2006. Menjivar was disqualified for an illegal kick. He was performing extremely well up to that point, seemingly on his way to handing Faber a loss. Seven years later, both are desperate for an A-list win. It seems likely that they will go all out in a fast-paced, action-packed scrap, since that is how these guys normally compete.

Dan Henderson faces off against Lyoto Machinda in a bout to decide who should stand next in line behind Chael Sonnen in the Jon Jones challenger queue. Both men are former champions. Machida wore the UFC 205-pound strap before losing it to Mauricio “Shogun” Rua one fight before Jones bludgeoned the title away from Shogun. Henderson remains the only man in history to simultaneously hold championships in two weight classes in a major promotion. He did that a few years ago in PRIDE’s 185- and 205-pound divisions.

Then, topping it all off, former two-time US Olympian and 2008 bronze medalist Ronda Rousey will rewrite the record books as she becomes the first woman, along with her opponent, Liz Carmouche, to compete inside the Octagon. She is also the first woman to hold a UFC title. Her Strikeforce 135-pound championship was converted into the UFC title when Strikeforce, which is owned by the UFC’s parent company, folded up shop a few months ago. We will find out on Saturday if she will be the first woman to successfully defend a UFC title.

Add all those fights together and UFC 157 is one of the better cards in recent memory. It is must-see TV in my book.

So, what will happen when Rousey and Carmouche get down to business on Saturday night?

If history is any indicator, Rousey will win by first-round armbar. The Olympic Judoka has been unstoppable so far in her MMA career. Six fights. Six wins. Each of those wins occurred by armbar in the first round.

Those stats are crazy. All of Rousey’s opponents know that she is showing up to win by armbar. She makes no bones about the fact that she is going to win by armbar. And when the bell rings, she closes the distance with decent striking, uses her amazing judo skills to throw her opponent, and then she transitions to an armbar, whether in the midst of a ground-and-pound attack or during the transition.

Everyone knows that is her game plan. Yet, nobody has been able to stop it.

Carmouche hopes she will be the first. The US Marine Corps veteran is a well-rounded fighter, though she definitely prefers to stand and bang with an opponent. She will want to do just that against Rousey.

She will do that because she knows that she has the better standup technique. She also likely has the better chin, though we don’t know that for sure because Rousey has yet to eat a truly clean power punch from a devastating puncher.

Carmouche isn’t a devastating puncher in terms of one-punch knockout power. She is, however, an aggressive, confident striker who possesses enough power to score a knockout win when she puts a couple shots together. She will want to touch the champion over and over in search of wobbly knees. Once that happens, she will sell out like there is no tomorrow in search of the win.

Why? Because she needs to do whatever it takes to keep from getting thrown to the ground. If that happens, she will lose. Period. End of sentence.

She may lose by submission, like each of Rousey’s previous opponents. Or she may lose by ground and pound, since I know Rousey has been working hard on her top striking game. Either way, she will lose.

With that said, nobody can be certain whether Carmouche can handle Rousey, if she is able to put the champion on her back. The challenger has a very effective top game. That bodes well for her. Still, nobody has really seen Rousey’s offensive and defensive guard put to a true test.

Nonetheless, if I’m in Carmouche’s corner, I wouldn’t want to be the first fighter to take that test. Rousey has been ground fighting, albeit as a Judoka, since she was a young child. She evolved into one of the best on the planet. That suggests to me that, if she has spent significant time honing her guard, that it will be extremely dangerous. She is that good of an athlete.

Rousey should avoid trying to make some sort of standup statement on Saturday night. She has largely been a one-trick pony so far in her career, but that one trick is amazingly effective. She needs to stick to what she knows in the UFC’s inaugural female fight. If she does, my gut is telling me that she will also leave the Octagon as the first woman to successfully defend a UFC title.