The Blueprint - Penn vs. Diaz

BJ Penn faces Nick Diaz in the main event of UFC 137 this Saturday night in Las Vegas. Michael DiSanto breaks it down... 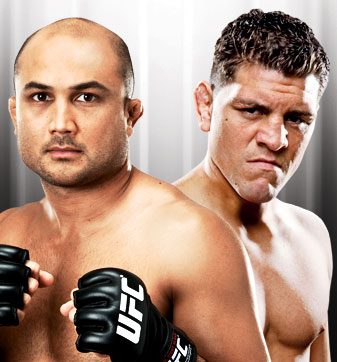 Nick Diaz failed to show up to back-to-back press conferences to hype up his then-scheduled title challenge against welterweight kingpin Georges St-Pierre. Not sure whether the enigmatic fighter would actually show up for the bout, the boss pulled Diaz from the main event.

Believe me. White could have done worse, like terminate Diaz’s fight contract. He didn’t.

The question remained, though, when would the Strikeforce champion make his first return to the Octagon since 2006. The solution was brilliant. Diaz would indeed be granted his UFC return at UFC 137. Not against GSP. He would instead face BJ Penn, one of only two men to win championships in two different UFC weight classes and a fighter who will go down in the annals of history as one of the best ever, pound for pound.

Yet in a strange twist of events, GSP ended up injuring his knee during training, forcing him out of his title defense against Carlos Condit. This elevated Penn-Diaz to the main event, the spot originally pegged for the maligned Stockton native.

And for my money, Penn-Diaz is a more intriguing, more fan friendly matchup than Diaz-GSP.

Probably sounds a bit like blasphemy to some. I don’t care. I’m a firm believer in that statement. Think about it for a moment. Have you ever witnessed Diaz or Penn in a boring fight when it didn’t involve an elite wrestler holding them on the ground for the length of the bout?

Neither Diaz nor Penn is a dominant wrestler, so a lay-and-pray strategy isn’t in the cards for either man. Instead, we will see two of the best fighters in the world, pound for pound, go head-to-head in what will likely unfold as a back-and-forth barnburner for as long as it lasts. That makes for must-see TV.

So, what will happen once the action gets under way?

Let’s dismiss with the obvious first. This fight will not be decided on the ground.

Diaz and Penn are the two best submission artists in the division, bar none. Penn is the more decorated of the two, holding the amazing distinction of being the first non-Brazilian to win the black belt division of the World Jiu-Jitsu Championships. He did that after only three years of BJJ training.

Diaz is not a decorated submission grappler, like his opponent. But he doesn’t take a back seat to anyone, including Penn. That is especially true when it comes to his offensive guard. The Cesar Gracie black belt might even hold the edge over Penn, in terms of the lethal nature of his guard.

None of that will be overly relevant on October 29. This fight won’t be decided by either man’s BJJ skills. Neither Diaz nor Penn are particularly effective at taking the fight to the ground, and neither of these guys wants to pull guard against the other. It may end in a submission. That is a very real possibility, though a knockdown, not a takedown or someone pulling guard, is the likely prelude to a submission.

This bout will be decided in pugilistic fashion. These guys are coming to throw hands, first and foremost. And they will keep throwing hands, mixed with the occasional kick, knee and elbow, until someone falls down or the final bell sounds. That is crux of each of their game plans. Trust me on that one.

Diaz will come out looking to slap box. He will paw with his right hand, while he looks for openings for quick right hooks and sharp straight rights down the middle. His mouth will be running the entire time, taunting Penn with venomous comments about any and everything.

Back to the slap boxing part. Diaz will be doing anything but slapping his foe. He will appear to be throwing pitter-patter punches. Yet, he throws with such great technique and overwhelming volume that the accumulation of damage from his blows is very real. And it compounds quickly.

Diaz will look to overwhelm his foe with activity, just like he did Frank Shamrock, Paul Daley and the eight other opponents he has faced since the calendar flipped to 2008. They say speed kills. Well, so does overwhelming activity and pressure, and that is what Diaz does better than anyone else.

Penn does not want a fire fight. The conventional wisdom is that the best way to beat the Hawaiian superstar, other than a lay-and-pray strategy, is to smother him with pressure. That is a risky proposition, though, because the former lightweight and welterweight champion is probably the best pure boxer in the division, and he loves to counter.

“The Prodigy” has the second best jab in the division, and that is the key to his standup offense. Much like a traditional boxer, Penn stands with his weight cheating toward the front and heavy hips. That allows him to throw with maximum force at any moment. Diaz has below average takedowns, so Penn won’t alter his normal stance, other than possibly sitting down just a bit more to generate even more power.

Penn can counter with the best of them. But he doesn’t stick and move on his counters. He plants and bombs. What that means is Diaz will have ample opportunity to return fire, assuming a Penn counter doesn’t turn the lights out. With Diaz’s sturdy chin, that is a safe bet.

Once on the inside, the fight should be all Diaz. Penn needs space to do real damage on the inside, particularly against a taller opponent. Diaz does not. He might be the sport’s single-most prolific puncher in a phone booth.

That is what Diaz wants. He wants this to be a fight in the phone booth. He wants to be trapped in the trenches with Penn.  He wants to overwhelm Penn with activity, forcing the former two-division champion to defend, rather than attack.

By contrast, Penn wants space to maneuver. He wants time to set up his shots. And he wants the ability to land one or two fight-altering shots.

On paper, Penn is the more skilled fighter. He is also the more accomplished champion. But this fight has Nick Diaz written all over it. Diaz is the second hottest welterweight over the last couple of years, second only to GSP. Penn has largely been an average welterweight in the UFC. His record stands at an average 2-3-1. Both wins were against Matt Hughes.

Something tells me that win number three won’t be against Diaz.