The Blueprint - Ortiz vs. Griffin III

Tito Ortiz closes his UFC career and his trilogy with Forrest Griffin this Saturday night in the co-main event of UFC 148 in Las Vegas. Michael DiSanto breaks it down... 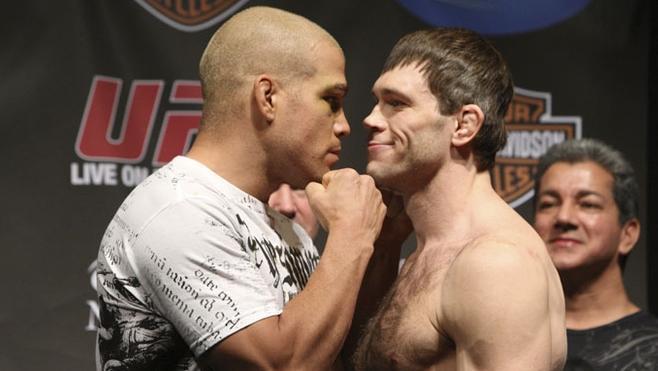 The iconic former champion will enter the Octagon for the final time as a competitor on Saturday night. Standing across from him will be a guy who he fought twice before—former champion Forrest Griffin. Both bouts ended in a controversial split decision, with each man winning once. Both bouts were action-packed, fan-friendly fights.

What will happen on Saturday night?

It really is that simple.

I wrote those same words in 2009, and nothing has changed since then. Well, some things have changed. We’ll get to that shortly. Nonetheless, the matchup itself hasn’t changed.

How can I be so sure?  Griffin has tremendous Brazilian Jiu-Jitsu skills, including a very effective offensive guard.  In fact, nearly half of his professional wins have come by submission.  Isn’t there a chance that he will submit Ortiz after being taken down?

No chance at all.  Fans must remember that Ortiz has not been submitted in over a decade, and the last time that it happened, he was so exhausted that he could hardly move. That could certainly happen against a cardio machine like Griffin who loves to set a frenetic pace. But I seriously doubt it.

Ortiz might just have the most vastly underrated ground game in the history of the sport. No, he isn’t Royce Gracie. But he is closer to the Godfather of Submissions than he is to Chael Sonnen. Read my preview on Anderson Silva versus Sonnen to get the background there. Thus, I don’t see any way that Griffin submits Ortiz, unless he has him severely hurt and is looking for a way out.

What about Griffin surviving Ortiz’s ground and pound attack to win on the cards due to near misses and other offensive activity from his guard?

Nope.  No chance there, either.  Anyone who has been watching the UFC for more than 15 minutes knows that a guy who spends the majority of the fight on his back will lose on the cards far more often than not.  It’s undeniable that judges place too much scoring deference on takedowns and ground control.

What about Ortiz scoring a knockout on the feet?

Once again, no chance.  Ortiz is a better striker than he was a decade ago. He also badly hurt Ryan Bader in their 2011 bout. So it is possible that he could land a lottery-winning strike against Griffin.  I certainly acknowledge that fact.  It’s also accurate that Griffin has been knocked out in three of his last five fights. But Tito Ortiz doesn’t bring the standup heat like Rashad Evans, Anderson Silva and Mauricio “Shogun” Rua, the three guys who put Griffin to sleep with their fists.

What about Ortiz outpointing Griffin on the feet?

Yet again, no chance at all.  Griffin, like Ortiz, doesn’t carry much single-punch power into the Octagon.  But he is a brutal striker because he uses activity, accuracy and an unbreakable spirit to overwhelm his foes on the feet.   Griffin beat Quinton “Rampage” Jackson on the feet.  He was beating Evans until the knockout.  He thoroughly dominated Mauricio “Shogun” Rua, one of the more dangerous and unpredictable strikers in the division, in their first bout.  And he outpointed Rich Franklin on the feet.

In each of those bouts, Griffin controlled the action with precision and an incredible work rate.  Ortiz knows how to let his hands flow freely in the sparring gym, but he has yet to bring that sort of effortless striking to the Octagon.  That won’t change in the last fight of his career.  If this fight remains standing, Griffin will overwhelm Ortiz with jabs, leg kicks and the occasional hard right hand. There is no doubt about it.

So, just how is Ortiz supposed to get Griffin to the ground?

There was a time when Ortiz was one of the most dominant takedown artists in all of MMA.  That was a long, long time ago.  Over the last half of a decade, Ortiz has been a shell of himself in terms of the explosiveness and brute strength that the world witnessed from him early in his career.  It is clear that his string of injuries, including major back surgeries, and advancing age have sapped Ortiz of his once dominant wrestling skills. He no longer has an explosive double-leg takedown. And he certainly isn’t able to manhandle other lightweights like he used to during his prime.

If you are reading through those words, you already know that I don’t see Ortiz having much success shooting in and taking down Griffin on Saturday night. I think his best chance for a takedown will be from the clinch or against the fence. Griffin’s takedown defense is less effective in those situations than when fighting at a comfortable distance in the center of the cage.

So, how do I see the action unfolding?

All signs point to Griffin dominating the action on the feet en route to a unanimous decision or a late stoppage. It doesn’t seem likely that the bout will be as close as their first two encounters.

Then again, every great champion has one more great effort in him somewhere. Make no mistake about it. Ortiz was a great champion at one point in his career. Roy Jones Jr., a future Hall of Fame boxer who is unrecognizable compared to the once pound-for-pound great, found a way to score a decision win at 43 years old against a highly regarded cruiserweight contender last weekend.