The Blueprint - Nelson vs. Mitrione 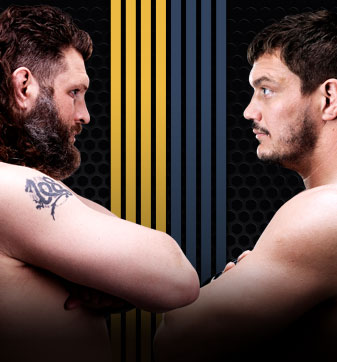 I’m going to be brutally honest.

With his ever-present (though shrinking) belly, Roy Nelson doesn’t look like your typical prizefighter. In fact, nobody on the planet, aside from UFC fans, would ever look at Nelson and think he is anything other than a barstool tough guy.

Oh, what a surprise those folks would be in for, if they ever made the mistake of testing “Big Country” on a street corner. Wow.

Matt Mitrione is one of the best pure athletes in the heavyweight division. This guy played in the NFL for two different teams, as a 300-lb behemoth. Forty-five pounds lighter and seven years later, Mitrione is now a top heavyweight prospect in the UFC.

Watch him for five minutes and his elite athleticism is obvious. This guy is lighter on his feet than any heavyweight, other than Cain Velasquez. He has explosive speed similar to what Brock Lesnar possessed at his peak. And he throws his hands with the comfort, poise and polish of a professional boxer. He might not hit with the same destructive force of his Blackzilians teammate Alistair Overeem, but he hangs with most other guys.

When Nelson and Mitrione stand opposed for the post-weigh-in stare down, the difference in their physiques will be glaringly obvious. Mitrione doesn’t have the musculature of a bodybuilder, but the massiveness of his frame will make Nelson look like a boy standing across from a man.

The only problem for Mitrione is Nelson is far from a boy. He may not have a UFC-caliber heavyweight physique. Nonetheless, this guy has a world class chin underneath that moonshiner beard. He easily matches Mitrione, if not surpassing him, in one-punch, show-stopping power. And his ground skills are among the best in the business, when he chooses to use them.

The uninformed won’t know from looking at the two, but Mitrione is the underdog in this fight. Not vice versa.

If you doubt that statement, pull up two Nelson fights from your DVR: Mirko Cro Cop and Stefan Struve. The former, a one-time great in Japan, got blasted into retirement. The latter is a current top-ranked heavyweight, and Nelson destroyed him in 39 seconds.

Of course, Nelson’s career hasn’t always been high-fives and champagne. He lost fairly one-sided bouts against reigning champion Junior dos Santos, former champion Frank Mir and top contender Fabricio Werdum. That sounds like an insult, but I beg to differ.

Watch the film on those fights again. Nelson absorbed an insane amount of damage. Yet, he always came forward and never looked like he was on the verge of getting knocked out. In fact, Nelson has only been knocked out once in his professional career, despite the fact that he has faced more than his fair share of savage strikers.

Guys pound away on him, yet “Big Country” continues coming forward.  That is mentally draining, particularly when faced with the possibility of eating a fight-ending counter right hand, if Nelson’s opponent gets too aggressive with his attack.

I have a feeling that Mitrione will try to avoid standing in the pocket and exchanging with Nelson. He will, instead, look to use his superior athleticism and hand speed to rip and retreat. He will bang away with the jab, a lead left hand, or a solid one-two combination before getting out of harm’s way.

Mitrione will try to open throwing angles by circling to his own right in an attempt to keep his lead right foot outside of Nelson’s lead left foot. That will create the appropriate openings for his big left hand down the middle, arguably Mitrione’s best weapon.

Yes, I know Mitrione has been working hard on his ground game for the past few years. But it still pales in comparison to Nelson’s ground game. I’ll actually go so far as to state that, if this fight transitions to the ground and Nelson is able to keep it there for more than 60 seconds, then he wins more often than not. Actually, a win might be substantially certain in that circumstance.

The rip-and-retreat approach will help keep the fight standing, if executed properly, because Nelson will be continually resetting his feet to adjust to Mitrione’s ever-changing angles. Don’t go straight back. Don’t become predictable with strikes. Don’t stay in the pocket for more than two-, or occasionally three-, punch combinations. Those are the three big keys to Mitrione properly utilizing the rip and retreat style.

Nelson, by contrast, will simply walk down his foe from bell to bell. He will work to cut off the cage by stepping forward and to the left with his lead foot in order to prevent Mitrione from taking advantage of angles and also forcing him to retreat into Nelson’s best weapon.

“Big Country” will let his fists fly with reckless abandon. If he finds out that Mitrione has an advantage on the feet, then Nelson will look for the takedown. That has increasingly become a forgotten weapon for him over the last couple of years, so this is the perfect time to go retro and bring back the takedowns.

So who is going to win? Well, a win on Saturday night won’t likely result in either man receiving an instant title shot. What it does accomplish, however, is see which man belongs in the ever-expanding group of heavyweight contenders and which is more likely to serve as more of a gatekeeper.

But what I care more about is the fact that this matchup has all the ingredients to result in a great fight, one that will have moments, if not several minutes, of rock’em, sock’em robots action. With two monsters like this, that suggests a high likelihood of a knockout or submission. Since both Nelson and Mitrione prefer to throw hands, a knockout seems like the most probable outcome of the two.

The only question, of course, is who will survive. We will all find out soon enough. I actually wouldn’t be surprised to see either man win Saturday night. I think this is an extremely even matchup. But I have a sneaking suspicion that Nelson will have too many tricks up his sleeve, though I’ve been wrong on that issue in the past.