The Blueprint - Munoz vs. Weidman 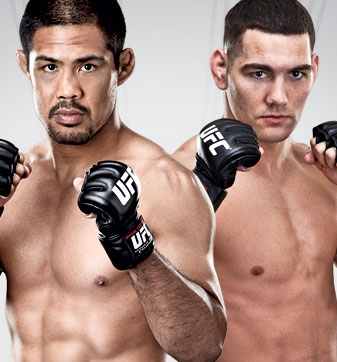 The UFC returns to FUEL TV on Wednesday night with another fun fight card headlined by Mark Munoz versus Chris Weidman in a bout that will have far-reaching implications in the middleweight division.

Munoz is a middleweight mainstay whose name has been tossed around among the list of title contenders for nearly two years. His last wins came against marquee opponents in Demian Maia and Chris Leben, with the latter coming by TKO. Munoz will enter the Octagon on Wednesday night hoping to establish that he is, indeed, the number one contender to Anderson Silva’s middleweight crown. An impressive victory could be just what the doctor ordered to secure his first UFC title fight.

Weidman, on the other hand, is still a relative newcomer to the UFC, with less than half of the Octagon appearances as his foe. He isn’t on anyone’s short list of title contenders, but he is on everyone’s list of top middleweight prospects. Weidman’s most recent win, a unanimous decision over Maia, proved that this guy is more than just hype. A win over Munoz likely won’t be enough to secure a title shot, but it will definitely establish him as middleweight mainstay standing on the verge of title contention.

In other words, both men have a lot on the line on Wednesday night.  What is going to happen once the action gets underway?  My guess is a standup war.

Both Munoz and Weidman have deep amateur wrestling roots. Munoz was a two-time All-American and 2001 National Champion at Oklahoma State. Weidman was a two-time All-American at Hofstra and placed third in the national tournament during his senior year. When two highly accomplished wrestlers face off inside the Octagon, it is typical for their wrestling to cancel out, which means slugging it out for the duration of the fight.

I’m quite sure that neither man is has much trepidation over a standup-focused affair. Munoz has shown a tremendous propensity for banging it out with opponents. He carries show-stopping power in his right hand, though he wings both left and right hands with seriously bad intentions.

Munoz typically uses his standup as a means to a takedown so that he can unload his equally brutal ground-and-pound. But as he learned in his bout with Yushin Okami, takedowns against a strong wrestler aren’t guaranteed, even for a guy with Munoz’s wrestling chops. Thus, he has spent countless hours since that fight focusing on his standup so that he has other avenues to victory, aside from putting an opponent on his back.

Munoz showed his growth as a fighter when he fought Aaron Simpson and CB Dollaway, who are two of the better wrestlers in the division. Munoz displayed a varied game plan, without an exclusive focus on takedowns. He won both bouts. It is likely that he will approach Weidman the same way.

Weidman has shown a ton of confidence and comfort in his standup game. That makes a lot of sense, since he is trained by one of the best standup coaches in the game in Ray Longo. Weidman’s standup, though, is very different from Munoz’s.

The New Yorker isn’t a slugger, like Munoz. He is much more of a tactician, fighting behind the jab and changing angles to both open throwing lanes and present a difficult target for return fire.

That is a great way to approach a guy like Munoz, who will regularly find himself off balance because he throws nearly every strike with such commitment and power. Weidman should try to take advantage of that by keeping his long jab in Munoz’s face for most of the fight. His five-inch reach advantage will be a significant factor in the fight, if Weidman remains committed to the jab.

The hot-shot prospect should be careful not to circle out too often to his left after he jabs. Munoz’s best weapon, as mentioned, is his right hand. Weidman should circle away from that weapon as often as possible.

If he starts to land the jab with regularity, Munoz will likely get impatient and throw with more and more aggressiveness, which will open the door for a takedown. Munoz, like most wrestlers who haven’t adopted an addict-like commitment to mastering the guard, doesn’t like fighting from his back. I don’t think it is shocking to state that his guard is probably his weakest offensive position. If Weidman can put him there, he will score points without much risk in getting submitted during his ground attack.

Munoz will need to counter Weidman’s length and movement advantages by using controlled bombs to close the distance. He needs to get into Weidman’s chest and make this a slugfest, not a technical kickboxing bout, if he is going to win his fifth consecutive fight.

He can make it a slugfest by cutting off the cage with diagonal forward movement, rather than chasing his foe. Once Weidman is anywhere near the cage, Munoz should explode in for a double-leg. He probably won’t be successful scoring a takedown in that scenario, particularly since the cage is a fighter’s friend when defending doubles. But it will allow Munoz to move from the double to the clinch, which is a big key for him winning the fight.

On the inside, Munoz is probably the physically stronger man. I don’t know that for certain, but it seems likely after watching the two compete in separate bouts. Plus, Munoz has great technique in the clinch, particularly when it comes to firing elbows, dirty boxing and transitioning to throws or a high crotch takedown.

Just like with Munoz, Weidman’s weakest offensive position is undoubtedly his guard. I know he is a purple belt in jiu-jitsu under Matt Serra, who certainly doesn’t progress students through the ranks haphazardly. But I guarantee that Weidman is more comfortable facing a guy with Munoz’s vicious ground and pound from the top position or on the feet. I’m not suggesting that Weidman doesn’t have the submission skills to pull off a stunning victory from his back. I’m arguing that should be a backup plan, if he doesn’t find success on the feet or otherwise can’t work to his feet following a takedown.

At the end of the day, I think this fight is much more evenly matched than most are suggesting. Munoz is the rightful favorite, but only by a slim margin. It would not surprise me in the least to see Weidman pull off an upset victory. In fact, I might even be leaning that way in my own mind.

Whatever happens, the winner of this bout will be well positioned to make a move in the division in the fall. For Munoz, that may mean a title shot. For Weidman, it likely means another marquee opponent on a significant fight card.