The Blueprint - Jones vs. Belfort 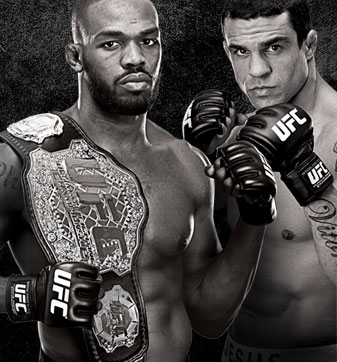 On Saturday night, Jon Jones will return to the Octagon in an attempt to get one step closer to light heavyweight immortality.

A win would tie the champion with Chuck Liddell and Frank Shamrock as second most successful 205-pound champion in UFC history with four successful consecutive defenses of the crown. That is pretty remarkable when you consider that Jones won’t hit the one-year anniversary of his first successful defense (over Rampage Jackson) until two days after UFC 12?52.

But let’s not just assume that Jones will join those legendary fighters in the history books. That is putting the cart far, far before the horse because Jones must first win his bout. Despite what the oddsmakers are saying, a win is nowhere close to a sure thing. Former light heavyweight champ and heavyweight tournament king Vitor Belfort is nobody’s light lunch. Jones included. In fact, I’m going to go so far as to state that Belfort is both the most well rounded fighter and deadliest striker that Jones will have faced in his career to date.

Here is the deal. Jones might very well be the most gifted fighter to ever wear the 205-pound strap. Nearly a decade ago, many felt the same way about Belfort. Rewind it back another half decade and the entire sport thought that the Brazilian was destined for all-time greatness.

Remember Belfort’s debut at UFC 12? He was a 19-year-old kid who happened to be built like Adonis, had fists with the speed and power of Mike Tyson, and was a Carlson Gracie black belt. Oh yes, he also sported a Madison Avenue mug shot. Combine all that with the fact that it took him a scant 120 seconds to defeat Tre Telligman and Scott Ferrozzo to capture the heavyweight tournament title in Dothan, Alabama at UFC 12, and it is easy to understand why this guy was given the nickname “The Phenom.”

Of course, anyone who has followed Belfort’s career is all too familiar with the ups and downs that followed his amazing debut. He has dropped several bouts that most thought he should have won. His dedication to training has been questioned more than once. And the general sentiment is that he has never quite lived up to his vast potential.

Everything changed, however, a few years ago when the former teenage sensation realized that his days in the sport were getting numbered. His aura of invincibility long gone, even Belfort began looking into the mirror and wondering what could have been. That moment led to a career-altering decision. He opted to shed a few pounds of unneeded muscle and drop down to the 185-pound division. It was a dramatic weight cut. There is no doubt about that. But it allowed him to fight guys with similar physical frames, something he rarely got to enjoy competing in the light heavyweight and heavyweight divisions during his first decade in the sport.

The results were nothing short of astounding. Five wins in six fights—each in spectacular and utterly dominant fashion. He has looked every bit as good as the MMA world thought he could be 15 years ago. And rather than continue campaigning for a second crack at Anderson Silva’s middleweight crown, Belfort has chosen to shortcut his longing to regain UFC gold by moving back to the light heavyweight division and filling in for an injured Dan Henderson in what will likely be the final 205-pound title bout of 2012.

Belfort actually didn’t just agree to substitute for Henderson. He basically begged for the matchup, reaching out to UFC co-owner and chairman Lorenzo Fertitta when he heard that Henderson was injured.

UFC brass and the champion were more than happy to oblige Belfort after other highly ranked light heavyweights, including former champion Lyoto Machida, turned down the opportunity face “Bones” Jones on short notice.

So, here we are. Jon Jones versus Vitor Belfort. A champion knocking on the door of pound-for-pound greatness versus a former champion who seems to have harnessed greatness once again.

Belfort will be searching for Jones’ chin. It is really that simple.

That is a bit of a daunting reality because Jones is a wicked standup fighter in his own right. His striking isn’t the physical embodiment of C4, like with Belfort, but he has some of the most creative, unpredictable and effective striking in the division. Plus, Jones has a 10.5-inch reach advantage.

The Phenom must, therefore, embrace what already comes naturally to him—sitting back and countering. Even at 35 years old with nearly 16 years in the sport, Belfort remains one of the fastest fighters in the game - certainly one of those among the speed elite in the light heavyweight division.

That means waiting for Jones to lead with a lazy jab, which he does from time to time, or a long right hand. He needs to slip the strike, step in and fire like there is no tomorrow. Belfort’s blazing hand speed allows him to land both with insane force and velocity, but also to land very significant punches in bunches.

A major key in pulling that off will be winning the footwork battle. Belfort needs to keep his lead right foot outside of Jones’ lead left foot. This will allow the challenger to create the proper angle to land his best punch, which is his counter straight left. It will also allow him to slip Jones’ lead strikes without getting himself out of position.

Once he lands a strike of any significance, Belfort should sell out for the win. Jones has never had to deal with a blitzkrieg attack. Nobody knows how he will handle that sort of adversity. Not even Jones himself. The sport has been so easy for him so far in his career that his ability to handle adversity remains the lone question mark hanging over his head.

But Belfort should not be reckless with his attacks. Jones is an amazing counterstriker in his own right. Moreover, Belfort attacking wildly reduces the odds of landing accurately, which, in turn, opens the door for Jones to clinch and throw his foe.

Belfort is a submission master. But he doesn’t want to find himself underneath Jon Jones. Nobody does.

Thus, Belfort needs to pick his spots. Again, that is no big deal because that is how he approaches every fight. Remember, this is the same guy who literally circled with Anderson Silva for nearly three minutes before opting to engage with any form of meaningful attack. He will have no problem remaining patient with Jones.

If Belfort is able to effectively slip and counter Jones’ attacks, it is very likely that he will win the fight inside of two rounds, whether by knockout or submission. I don’t see Belfort winning if the fight goes beyond two rounds. Remember, this is a guy who has 10 UFC wins. All 10 of them occurred within the first two rounds.

Jones, by contrast, can win in any round, including on the judges’ cards.

The champion is an amazing athlete with jaw-dropping talent. He also happens to have an extremely deep gas tank. As a result, he can fight at a fast pace, if he wants, in an effort to tire an opponent who is known for having a light gas tank. The best way to do that is to devolve the action into a grueling physical contest by clinching, pinning Belfort up against the cage, and taking every opportunity to take the fight to the ground.

The risk, of course, is that Belfort is one of the best clinch fighters in the game, and he possesses insane physical strength, particularly when he is fresh. He is a vastly underrated wrestler who could easily turn the table in a clinch and put Jones on his back—a position that remains untested.

With that said, Jones has shown that his MMA-based wrestling skills are about as good as they come. If he wants to put Belfort on his back, and commits to that path, it seems certain that it will happen, absent walking into a knockout punch.

Once on the ground, Belfort is a submission master, but that is largely irrelevant when fighting a guy with Jones’ wrestling base, ground-and-pound game, and submission defense. Jones probably doesn’t have much to fear on the ground, to be quite honest. He knows how to keep himself out of trouble, and it has been a long, long time since Belfort has used his offensive guard to win a fight. Actually, he has never done that in the UFC. Not once. UFC 152 won’t be the first time, either.

Jones can also win the bout by remaining very focused and engaging in a long-range kickboxing bout. Belfort has insane speed, but Jones isn’t far behind. His unimaginable reach advantage possesses the type of problem that fighters simply cannot prepare for, particularly when that is combined with his ultra-creative striking. If he finds his groove, he should be able to punch, kick and elbow Belfort from a distance through the first couple of rounds, when the challenger is the most dangerous, and then turn up the pressure with some infighting in the third, fourth and fifth rounds, if it lasts that long.

Oh, by the way, if anyone thinks that Jones is intimidated to stand and strike with Belfort, they should go back and watch his fights with Quinton Jackson, Lyoto Machida and Rashad Evans, each of whom are first priority standup monsters. Jones undressed each of them on the feet. Something tells me that he plans the same fate for Belfort on Saturday night.

There is a reason that Jones is a healthy betting favorite heading into this fight. He may very well be the most talented fighter to ever hold the 205-pound title. He is just starting to enter his physical prime and hasn’t even begun to tap the limits of his skills. Belfort is also returning to a division he abandoned more than five years ago. I have no idea whether he will come in lean and light, which is exactly what I think he should do, or whether he has tried to pack on a bit of additional weight for his return to light heavy.

Yet, I truly believe that the MMA world is making a very real mistake by counting out Belfort before the fight even begins. For Jones’ sake, I hope he isn’t making the same mistake because this is an imminently winnable fight for Belfort. He might not beat Jones eight out of 10 times. But all it takes is once. And that one time just might be Saturday night.