The Blueprint - Hughes vs. Koscheck

Take a quick peek at the reigning UFC champions. Notice any recurring themes?

I’ll give you a hint: it is a nine-letter word. Come on. You know what it is.

Of the seven UFC champs, five have deep amateur wrestling backgrounds. The two exceptions are both Brazil natives. I haven’t done the analysis, but my guess is that if we looked at the top 10 in each weight division that the breakdown of former wrestlers versus those with no wrestling pedigree would equal or exceed the championship ratio.

There is little doubt that a great amateur wrestling background is one of the most important tools in a fighter’s toolbox.  On Saturday night, two of the better amateur wrestlers to ever step inside the Octagon will square off in a bout that is long overdue.

Josh Koscheck and Matt Hughes. One is at the absolute peak of his career. A guy who many believe has all the tools to one day become a champion. The other is in the second half of arguably the most successful welterweight career in the history of the promotion.

From a matchup perspective, this is a relatively easy fight to break down. Kos is the better all-around fighter—period. His wrestling is better. His standup is light years better. His conditioning is second to none. And he will be the bigger, stronger man when the cage door closes.

Hughes’ lone advantage may be in the transition jiu-jitsu area. That may sound surprising, since Kos trains with famed JJ guru Dave Camarillo. But Hughes has been polishing his black belt-level submission game well before Kos ever donned a pair of vale tudo gloves. I doubt there is anything that Kos can do in the jits world that Hughes hasn’t seen dozens, if not hundreds, of times during his rolling sessions with Jeremy Horn. Oh yeah, Horn just so happens to be one of the most successful ground fighters that the game has ever known and a long-time training partner of the former UFC champ.

On pure skill alone, Kos wins this fight all day every day. He can basically choose how he wants the bout to unfold because of his wrestling advantage. That means he will likely look to keep the fight standing, since that is where Hughes is at his weakest. Kos has more than enough juice in his overhand right to score a one-punch knockout. He can do the same thing with a right high kick and possibly a left hook. He can also methodically pick apart Hughes, like he did Diego Sanchez back in 2007, if he opts to take a conservative approach to the fight.

I don’t expect Kos to come out looking for a takedown, even though he should be able to score one almost at will. Again, the transition jiu-jitsu world is the one area of the fight where Hughes likely holds an advantage. Kos has only been submitted once in a fight – when he was caught late in his bout with Drew Fickett in 2005. It seems unlikely that he will be submitted on Saturday night, but that isn’t outside of the realm of possibilities.

If Kos leaves an arm exposed during overly aggressive ground and pound, Hughes is more than capable of rolling into an armbar or raising his hips into a triangle choke. If Kos shoots for a takedown with his eyes staring at the canvas, a guillotine is major risk. And if Hughes can somehow find a way to put his foe on his back, a cross-side Kimura, Hughes’ bread-and-butter submission hold, is definitely a likely outcome.

Actually, Hughes may have two advantages. Is there anyone in the division with a more effective ground-and-pound game when he is in the top position? Neither GSP nor Kos is a slouch in that area of the fight game, but can they really claim to be more effective than Hughes?

If Hughes is able to score a takedown, it will be extremely interesting to see if Kos can work back to his feet or otherwise utilize his offensive BJJ game from the bottom. Hughes will remain very patient from the top position, focusing more on position, until his base is fully secure. At that point, he will begin to do what he does best, which is drop punches and elbows in grinding fashion. None of them will be designed to bring the fight to an end. Instead, each will be designed to chip away at his opponent’s strength, endurance and will. If Hughes can keep the fight on the ground for at least half the fight, he wins. Period.

In my opinion, though, this fight is far less about Xs and Os and the matchup on paper than it is each 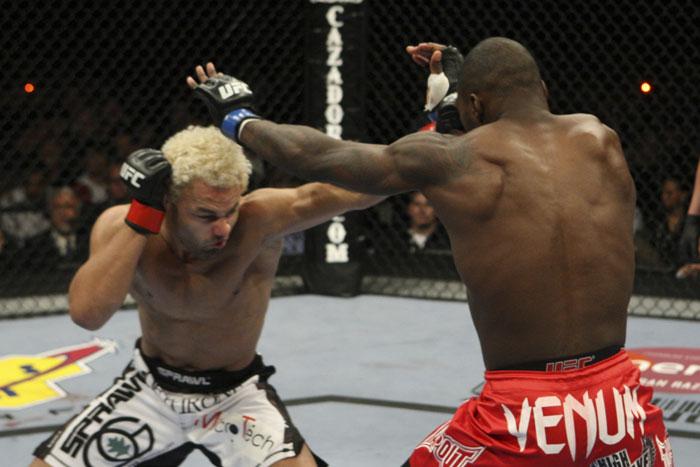 man’s mental state at this point in their respective careers.

Both are coming off devastating losses. Koscheck suffered a broken orbital bone in his bout, courtesy of Georges St-Pierre, in a lopsided unanimous decision loss. Hughes was on the wrong end of a one-punch, 21-second knockout, thanks to BJ Penn.  One can never predict how a fighter will respond after a truly devastating, one-sided loss, and this is a been-there, done-that situation for Hughes. And that may be the single-most important factor in this bout.

The GSP loss was the first time in his career that Kos was really thoroughly dominated without any excuses to serve as a crutch to detract from the outcome. GSP put a gorilla-sized beating on him after the AKA star completed a full, successful training camp. Kos fought with a lot of heart and courage, especially when one considers that he suffered the broken orbital bone early in the fight, but he had absolutely nothing for GSP in any aspect of the fight.  It was a 25-minute beating.

That is far more damaging to one’s psyche, in my opinion, than a quick knockout or submission loss. It is also more damaging than the similar beating Kos suffered at the hands of Thiago Alves, since he took the Alves fight on extremely short notice. Thus, he can rationalize the result by pointing to the lack of proper preparation. There is no possible way to explain the outcome of his bout with GSP, other than to accept the fact that he got soundly beaten by a better fighter.

Losses like that can lead to doubt, particularly in the first fight back. Doubt leads to hesitation. And hesitation inside the Octagon leads to losses.

Will Kos be fighting amidst a cloud of self-doubt? Can Hughes use that doubt to get his opponent to the ground? Once on the ground, will Kos panic? Will he make a mistake? Will he open the door for Hughes to score a dramatic upset win?

There are two more factors that work against Kos in this fight. First, he is taking the bout on short notice. Diego Sanchez was originally scheduled to fight Hughes, but a broken hand suffered a couple weeks ago opened the door for Kos to return to action earlier than he anticipated. The last time Kos fought on short notice he suffered a one-sided loss to Alves, as mentioned. That cannot be overlooked.

Second, fight night will mark the 287-day anniversary of his last fight, setting a personal record for time between fights. His current layoff is almost three months longer than his previous career long, which just so happened to be his last fight.

Will cage rust be a factor? Was it a factor in the GSP fight? Will Kos wonder if cage rust is going to be a problem? Will that cause doubt?

I think Kos will overcome his recent adversity with a career-best performance. But the wily former champion just might have another great effort under the hood.