The Blueprint - Henderson vs. Diaz 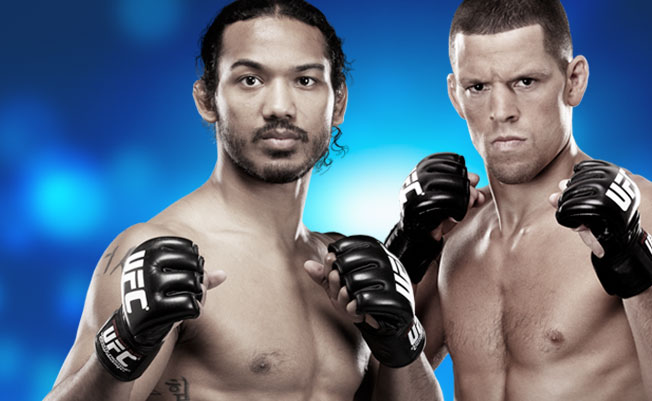 More often than not, when Nate Diaz enters the Octagon, he leaves with a post-fight bonus check in his pocket.

16 fights. 10 checks. Only two men—Anderson Silva, with 12, and Joe Lauzon, with 11—have collected more post-fight bonus checks in UFC history. That means this guy brings it each and every time he straps on the vale tudo gloves.

I honestly believe Diaz’s ability to thrill onlookers is due to the fact that he approaches every bout as a fight. It isn’t an athletic contest for him. Basketball players and football players engage in athletic competition when they pick up the round and oval ball, respectively, and try to outscore an opponent.

His opponent on Saturday night is the exact opposite. He is a tactician who methodically breaks down opponents with game planning and athleticism. He is a sportsman who is inside the Octagon to test himself athletically against his opponent to see who is better. There is no ill will. It’s not about fighting. It’s about competing and winning.

The two will square off in the main event of UFC on FOX this Saturday. Bendo hopes to earn his second successful title defense. Diaz wants to start his first title reign.

How does this one break down? It’s pretty simple, actually.

The champion is the shorter, but undoubtedly stronger, guy. He is a physical fighter who likes to hunt and peck in the standup game, until openings arise for a takedown. He doesn’t always look to take opponents down. His speed and athleticism allow him to dart in and out almost at will and score with effective punches against most opponents. He also throws good kicks to the legs and body.

Again, Bendo is competing. He is outpointing. He is doing what it takes to defeat his opponent. While he, like any fighter, would love a finish, he’ll take a decision win, which isn’t a derogatory statement by any means, because he is anything but boring. Bendo regularly engages each of his foes with a high work rate, but he engages tactfully.

Against Diaz, Bendo will come out utilizing a lot of lateral movement with his hunt and peck style. He will try to get Diaz to chase him so that he can use angles to strike and stay clear of his foe’s swarming, whirling-dervish attack. It is going to be a stick-and-move game plan. If he experiences success on the feet, then he may try to push back Diaz by leading behind the double and triple jab, something Bendo does frequently, particularly when he is feeling good.

I would be surprised, however, if Bendo seeks to take the fight to the floor. He may have no choice, if he is getting beaten up on the feet. Absent that, I think Bendo will want to keep the fight standing for as long as possible. Read on to learn why.

Diaz, on the other hand, will be equally comfortable, if the fight stays on the feet or ends up on the ground. This guy is a stylistic carbon copy of his older brother, Nick Diaz, who has long been recognized as one of the best in the sport, pound for pound. That is a serious compliment for any fighter.

Diaz will come out with nonstop pressure. He wants to throw hands early and often in every fight, and he does so by constantly walking forward while he paws, slaps and grabs with his right hand. Those moves are designed to gauge the distance so that he can turn over his right with a sharp hook, fire straight lefts down the pipe, and, of course, pop the jab.

Diaz literally does that over and over again while mixing in venom-laden trash talking. His mouth often moves as much as his hands in fights because Diaz is working hard to get into his opponent’s head. It works often, too. Guys will want to hurt him. They will fight from emotion. That means they will become overly aggressive, which allows the master counterpuncher to take full advantage of an opponent fighting out of character.

Just ask Donald Cerrone. The “Cowboy” is one of the best standup fighters in the division. Yet, he got thoroughly undressed on the feet by Diaz. Why? Cerrone fought like a crazy man, presumably because he was so angry at Diaz for all the pre-fight banter that he wanted to show the Stockton-native a lesson. Cerrone received one instead.

Diaz hopes to get inside of Bendo’s head in the same way. He will fire insults that require lots of #@#% symbols, rather than letters, when typing up quotes. Those insults will be just before, during and fresh on the heels of punches. He will be the Energizer Bunny of trash talking, particularly if he sees Bendo getting angry.

Take an angry, emotional opponent and hammer away at him with unyielding pressure and what has to be the highest fistic work rate in the division, and it is easy to see how Diaz is able to break opponents en route to victory. He will look to do that on Saturday night.

If the fight ends up on the ground, Diaz will enjoy a healthy advantage over the champion. His Cesar Gracie-honed submission skills are legendary in the UFC. Indeed, half of his 10 post-fight bonuses came thanks to a “Submission of the Night” award. He is equally adept from his guard or from the top position. That is rare, particularly in the current era, but it is certainly the case with the challenger.

The problem, however, is Diaz has extremely limited takedown skills, whereas the champion has very good anti-wrestling. Thus, it is unlikely that he will be able to rely on his submission skills if he is struggling on the feet against Bendo.

What does all that add up to? This seems be a standup affair from start to finish. Can the champion remain tactically proficient and committed to a game plan with lots of angles and lateral movement? Will Diaz impose his will through his trademark pressure-first style and fantastic boxing skills? I think those two questions will decide the outcome.