The Blueprint - Gustafsson vs. Silva 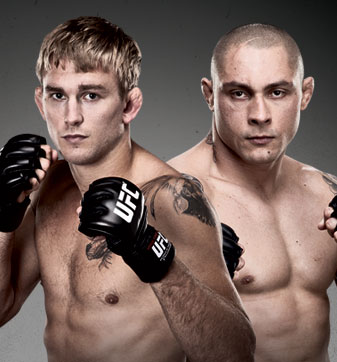 Alexander Gustafsson and Thiago Silva are both on the precipice of championship contention. Yet, each will enter the Octagon this weekend with very different levels of momentum.

Silva has only fought twice in the last 27 months. A back injury and then a failed drug test following an impressive performance against Brandon Vera leaves Silva in light heavyweight limbo. His contender status could very easily disappear if he loses on Saturday night in the UFC on FUEL TV main event in Stockholm, Sweden. His inactivity over the last couple of years raises serious questions about cage rust and focus. Yet, an impressive win can erase all of those doubts and put his suspension firmly in the rear-view mirror.

Gustafsson, on the other hand, is riding a four-fight winning streak over the last 18 months, stopping each of those opponents inside of two rounds. His recent run has taken him from UFC anonymity to a main event in his hometown. If he can defeat Silva, Gustafsson will definitely stand among the short list of championship contenders. A loss, by contrast, will raise questions about his ability to take his career to the next level.

A lot is on the line this weekend. But that isn’t the only reason to watch this fight. This is a mouth-watering matchup that will thrill all-action, standup-first fans, because both fighters love to get in there and bang.

Silva is the epitome of a predator. He only knows how to fight one way – coming forward in attack mode. He is the quintessential Chute Boxe Academy fighter in that regard. He learned this style growing up in the sport with teammates like Wanderlei Silva and Mauricio “Shogun” Rua.

Silva has spent the past four years fighting out of the American Top Team gym, which has rounded him out a bit. For example, he actually moves his head from time to time, but when the pressure is on, he reverts back to planting his feet and going to war.

Fighting with that style is a great way to approach Gustafsson, who is a taller, longer fighter. The Swede is a boxer by background, so his use of movement and the jab makes him a difficult puzzle to solve, unless someone is willing to wade into the heart of darkness and just throw down. Silva is planning on doing just that.

I also would not be surprised to see Silva take the action to the ground, if he either finds himself struggling to deal with Gustafsson’s crisp strikes or just wants to keep his foe guessing. He did just that against Brandon Vera in his last fight. Vera is a savage standup fighter, just like Silva, but he also has high-level wrestling in his arsenal. The Brazilian shocked everyone by putting Vera on his back and dominating the action with ground and pound.

He can do the same thing to Gustafsson, who is light years below Vera in terms of his wrestling skills. Once the fight hits the ground, Silva has a solid edge. Gustafsson is a purple belt in Brazilian Jiu-Jitsu with solid, but not stellar, ground skills. Silva is a legitimate black belt. He has excellent submissions from the top and bottom positions, and his ground control is even better than his submission game. We saw that against Vera, who is an extremely difficult fighter to control on the canvas.

Of course, I’m not suggesting that Gustafsson is a fish out of water in the wrestling or BJJ worlds. He showed tremendous takedown defense against Phil Davis in the first half of the opening round of their UFC 112 bout. Davis, who is now a teammate of Gustafsson, is a vastly superior wrestler compared to Silva. But Davis poses no real threat on the feet. Thus, Gustafsson could focus on defending takedowns, without much concern about catching a fight-altering blow on the chin. That won’t be the case on Saturday night, so I’ll be interested to see if the Swede will show the same sort of anti-wrestling against Silva. My guess is that he won’t be nearly as effective.

As a result, Gustafsson needs to remain focused on controlling the distance with his long, jackhammer jab. When Silva lunges in with his power punches, Gustafsson can either remain in the pocket looking to slip and counter with a hard left hook or right uppercut (arguably his best weapon), or use his footwork to change angles and fire a straight right hand, also a one-strike knockout weapon.

Granted, it has been a few years now, but Silva still has a one-punch knockout loss on his record. Lyoto Machida dropped him with a single strike back in January 2009. Gustafsson cracks harder than Machida, so there is no doubt in my mind that he can score a knockout if he catches his foe with a blind shot.

That doesn’t mean Gustafsson should recklessly seek the knockout. Quite the opposite is true because Silva carries more power in his fists than his foe. He doesn’t have better technique, but Silva is definitely the more explosive of the two. Thus, Gustafsson should pick and choose his spots – darting in and out behind the jab, landing a few power shots and getting out of Dodge.

If I were Gustafsson, I would avoid the ground at all costs, unless Silva is already on the edge of unconsciousness or exhaustion. I think he has enough of an advantage on the feet, assuming he uses good footwork and distance, that there is no point in trying to take advantage for any takedown openings.

Like I mentioned in the beginning of the piece, I think this is a stellar stylistic matchup, one that should produce lots of fan-friendly fireworks. There are so many questions lingering over Silva right now that it is tough to expect a statement performance from the Brazilian. Yet, that is exactly what I think will happen. We’ll see if I’m right.