The Blueprint - Guillard vs. Miller

Who will win this Friday's bout between Melvin Guillard and Jim Miller? Michael DiSanto breaks it down... 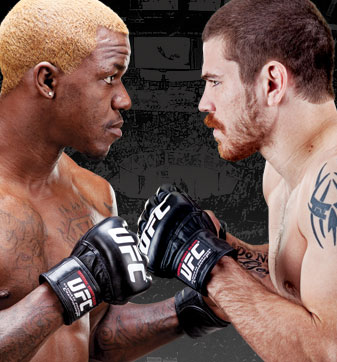 Six months ago, a debate raged among followers of the UFC lightweight division. Who was the rightful number one contender – Melvin Guillard or Jim Miller?

It wasn’t to be. Both suffered bad losses last year to temporarily derail their title hopes. Guillard was submitted in 47 seconds by Joe Lauzon. Miller was throttled by Benson Henderson over three lopsided rounds.

The pair will face off on Friday night with the hope of rebuilding their argument for top contender status.

How many times have I broken down a fight based on one man keeping the action standing versus the other getting it to the ground? Each of my last three breakdowns basically came down to that one simple point. Let’s make it four in a row.

Jim Miller is a former Division I collegiate wrestler with a black belt in Brazilian jiu-jitsu. Takedowns, ground control and transition jiu-jitsu are his specialty. His standup, while serviceable, is light years behind Guillard.

Like I said, this fight is all about whether it remains standing or heads to the ground.

Conventional wisdom suggests that explosive strikers are typically better served reacting, rather than leading, when the goal is to keep the fight on the feet at all costs. That is true because it is easier for a wrestler to shoot off of a lead strike than to slip a counter and change levels. Guillard will certainly look to counter on Friday night, but he will try to goad his opponent into attacking by pot-shotting him from the outside with blazing quick jabs, lead right hands, and one-two combinations.

Guillard’s biggest gift is his athleticism. He bounces around on extremely nimble feet at a distance that keeps him out of harm’s way. He can basically land the jab at will against all but the very best strikers, when fighting on the outside like that. The New Orleans’ native is also very good at stepping in with a lead right before bouncing back out to a safe distance.

The “Young Assassin” can fight Miller like that all night long without really risking anything. But Guillard doesn’t like to fight with conservative tactics. He instead loves to thrill the crowd with memorable knockouts. As he gets into a rhythm pot-shotting from the outside, he will start to stay in the pocket longer and longer, putting together three- and four-punch combinations in search of a knockout win.

Guillard has to be careful when he is in the pocket not to get tangled up. Miller has good, but not necessarily great, takedowns. His foe has excellent takedown defense. Yet, Guillard tends to get himself into major trouble when defending in the clinch or along the fence. Miller is very good at getting the fight to the ground in both of those positions because he has great technique and good physical strength.

Guillard will try to sap some of that strength by focusing a good bit of his standup attack at Miller’ torso. He will risk stepping into a knee strike or a clinch, which are two of the better counters to body punching in MMA, in order to punish the body.  Anyone doubting the effectiveness of Guillard’s body attacks should review his wins over Gabe Ruediger at UFC 63 and Waylon Lowe at UFC 114.  The former was one of the best body shots in Octagon history. The latter was just downright nasty.

If he can land a series of body shots on Miller, they will have a debilitating effect on the New Jersey native, particularly in the second and third rounds. As Miller’s power meter drains, his ability to get the fight to the ground will reduce, which means Guillard will be able to open up more and more on the feet.  All that spells late-round stoppage.

Scoring such a win requires patience. Guillard has only recently begun to demonstrate anything close to resembling patience during his fights. I expect to see that evolution continue on Friday night.

Patience is extremely important for Guillard in this fight because he is fighting a guy with an iron jaw. Miller has never been stopped, whether by submission or knockout, in his 23-fight professional career. It seems unlikely that Guillard will score a knockout in the first round, absent landing a perfectly placed punch that his foe does not see. Thus, patience will be the word of the day.

Miller also needs to remain patient in this fight. Guillard should give him a few opportunities to take the fight to the ground by overextending with power punches or circling too close to the cage. But he has to wait for those opportunities to arise. If Miller tries to force the action by aggressively attacking, Guillard will effortlessly pepper him with counter strikes.

If Miller instead sits back and forces Guillard to lead the action, it increases the odds that he will be able to duck under a strike and execute a takedown. Forcing Guillard to lead also increases the odds of the pair getting tangled up when Miller shoots for a takedown or fires his own counters. Either way, Miller has to get this fight on the ground early and often, if he wants to win, even if that means pulling guard from the clinch.

What should Miller do once the fight hits the ground? Did I mention that all five of Guillard’s UFC losses have come by way of submission?

The problem, however, is Guillard giving up his back to Miller is as conclusive as a marine biologist sticking his head into the mouth of a living great white shark when checking for tonsillitis. The end is certain.

Prediction time. How will this fight unfold? Wrestlers with strong BJJ skills tend to defeat strikers with big gaps in their submission defense more often than not.

I am not sure why, but I’m leaning toward Guillard in this one. No real X and O reason why. I just have a feeling.