The Blueprint - Guida vs. Maynard 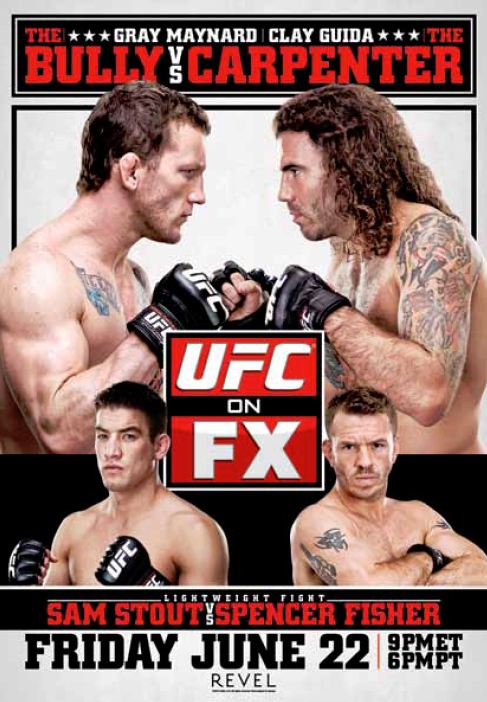 I should have changed the title. I considered it. At the end of the day, I decided to keep with the branded piece just for consistency. But this article is not about Xs and Os. It’s not about breaking down technique. And it’s not about who is going to win (or who is more likely to win) Friday night’s UFC on FX main event.

This article is about appreciating the moment.

Clay Guida versus Gray Maynard is one of those special matchups that causes me to sit back and take a breath. You know, the kind of matchup that makes me want to call friends who haven’t necessarily converted to mixed martial arts fans and invite them over for dinner and the fights. One of those matchups that is absolutely must-see TV.

The allure of this fight has nothing to do with the star power of the combatants. They are certainly top contenders. There is no argument to the contrary. Maynard is a puzzle that no lightweight, other than Frankie Edgar, has been able to solve. And Edgar only solved it once in three attempts. Sure, Nate Diaz beat him on The Ultimate Fighter, but Maynard avenged that loss when it counted.

But the respective lightweight status of Maynard and Guida isn’t what makes this such a great fight. It’s the way their styles mesh. It’s the way their personalities mesh. And they mesh in a way that all but guarantees a frenzied, fan-friendly affair from start to finish.

Think otherwise? Answer this question: Have you ever watched Guida compete in a boring fight?

I’ll answer it for you. No.

Guida is the closest thing to the Energizer Bunny that we have in the sport, across all divisions. He has a seemingly endless gas tank that he heavily relies on with his non-stop, whirling dervish style. It doesn’t hurt that he sports a caveman-style haircut. The way his locks fly around when he is throwing wild punches or bouncing on his toes just adds to the fun of the fight.

None of that would be meaningful if Guida was just a fringe contender. He is far from that. He may have fringe contender-type natural abilities. Yet, few guys in the sport work harder than Guida, and nobody squeezes more out of themselves inside the cage than this guy.

From his workmanlike approach to the sport to his athletic, but certainly not cartoonish, build, Guida is a fighter that the average weekend athlete can relate to. He just seems like one of the guys. And that makes him special. Toss in his unbelievable commitment to winning and the skills that he has built over the years, and it is easy to understand why this guy is a huge fan favorite.

Maynard is the polar opposite to Guida. He does not have a deep gas tank. In fact, that reality definitely contributed to his lone career loss. That frailty makes him very human.

Take away that one hole in his game and Maynard is otherwise a savage beast. The guy is as athletically gifted as any lightweight in the sport. His explosion and physical strength are legendary. And his wrestling skills are among the best in the sport.

Yet, Maynard is a headhunter’s headhunter. He is addicted to swinging for the fences like no other top contender that I can think of as I type. It is reminiscent of a prime Wanderlei Silva, when every punch was thrown with unbelievably cruel intentions. Every punch was designed to bring the fight to an abrupt end.

That is Maynard in a nutshell.  He could easily outwrestle 95% of the division. He could safely win fights by lay and pray. But he has no tolerance for that sort of conservative approach to a fight. Maynard is there to hurt people, and he is willing to walk into the heart of darkness in an attempt to achieve his goal. Self-preservation be damned.

When the bell sounds on Friday night, the fans are in for a very special treat. Guida will come out bobbing and weaving like a crazy man. Maynard, more closely resembling a Greek God than a crazy man, will stalk him looking for that one fight-altering opportunity. And when they meet in the center of the cage, it will be an explosion of action for as long as the fight lasts.

Don’t get up to get a beer or soda. Don’t go to the front door to pay for the pizza. And Lord knows, don’t get up to go to the bathroom at the arena. Why? Because you might just miss one of the most exciting scraps of 2012.

It might last 60 seconds or the full distance. I have no idea. I also don’t know who is going to win. In fact, I don’t really care. I’m just going to sit back and enjoy this one for as long as it lasts.