The Blueprint: GSP vs. Shields 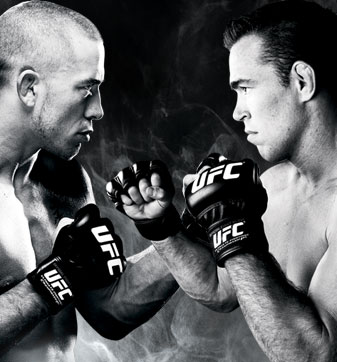 I said I would not do it again.

I might have even promised -- no crossed fingers or anything silly like that. Actually, I guaranteed it. Go back and read my UFC 124 post mortem. After predicting that Georges St-Pierre would suffer an upset loss at the hands of Josh Koscheck, I stated without equivocation I would not pick against Georges St-Pierre in another fight, unless his opponent happened to be Anderson Silva.

The exact quote was: "I’ll go so far as to say that I’m not picking against him in his next fight, no matter who he faces—Jon Fitch, Thiago Alves, Anderson Silva, King Kong or the Loch Ness Monster. Ok, those last few names are a bit ridiculous, but I’m standing by my word.  I’ll pick GSP against anyone in his next bout."

I don't do so poorly predicting the outcome of fights not involving the Canadian superstar. What is up with my GSP struggles?

Some of it has to do with the fact that I love to predict upsets. A bit more probably has to do with the fact that, on paper at least, many fighters appear to have one or more significant advantages over GSP heading into a fight. The rest is undoubtedly my inability to get the first Matt Serra and Matt Hughes fights erased from my consciousness -- two fights that proved that anything can happen on any given Saturday evening in the UFC.

I pride myself in making an honest, good faith effort to learn from my mistakes. I like to believe that I take every opportunity to grow as a writer, prognosticator, fight preacher, or whatever it is that I do here on UFC.com.

Surely, I have learned my lesson, right? I am definitely going to pick GSP to win on Saturday night. At the very least, I will withhold my pick and just breakdown the matchup followed by a claim that it is too close to call, right? Something. Anything other than picking yet another upset, right?

I cannot believe that I am going to do it again, but, as I like to say, it is what it is. I'm like an addict. So, let's get right to it. I believe that Jake Shields will fire the proverbial shot heard around the MMA world by snatching the UFC Welterweight Championship from GSP's kung fu grip.

The entire fight, in my opinion, comes down to who dictates where the fight unfolds. GSP can win the action in two ways: keeping the fight on the feet or putting Shields on his back. Shields, on the other hand, really only has one way to win: put GSP on his back.

From his piston-like left jab, to his very crisp straight right hand, to a nicely varied arsenal of extremely effective kicks, GSP is the real deal on the feet. Shields, by contrast, is very robotic with his striking. He smartly uses it no more than is necessary to close the gap and look for a takedown. GSP's advantages in the standup arena are so dramatic that the fight will likely seem like nothing more than a one-sided sparring session if the action remains on the feet.

There is really no need to break down the standup game in any greater detail. GSP knows the various holes in Shields' standup game, and he has all the tools to take full advantage of them. I am certain Shields knows the sort of trouble he is in, if the fight remains on the feet. Aside from landing a perfect strike a la Matt Serra, he has little chance of winning. GSP's advantages in the standup realm are that dramatic.

GSP has also proven beyond a shadow of a doubt that he is one of the most effective MMA-based wrestlers in the sport. Remember that the sport of wrestling is very different than wrestling in a fight. The former is a chess match over hand control, positioning and leverage. The latter is about seamlessly transitioning between takedowns and striking. It is about perfectly blending ground control and submissions or ground and pound, rather than focusing on either particular aspect.

GSP does those things better than anyone in the division, if not the entire sport. If he can put Shields on his back and keep him there, the champion will retain his belt. Shields is a grappling phenom, but his game is largely predicated on him being in a dominant position, whether on top or on an opponent's back. This is partly the result of Shields' freakish ability to get up off of his back, much like a young Chuck Liddell used to. As a result, his offensive guard is not nearly as dangerous as his top position or back game.

The problem for GSP, of course, is that Shields is also a dominant MMA-based wrestler. Unlike elite amateur wrestlers Josh Koscheck and Jon Fitch, both of whom appeared far to content to stand and strike with GSP, Shields knows that he has to get the fight to the ground if he wants to win.

Anyone who thinks he does not have the ability to take the champion down needs to go back and watch Shields versus Dan Henderson. Hendo is a two-time US Olympian in wrestling, so his pure wrestling skills put those possessed by Shields to shame. Hendo also had size and strength advantages over Shields. Yet, the Olympian spent the majority of the fight on his back, unable to solve the Shields grappling riddle.

Remember the quote from GSP's ground coach, John Danaher, on UFC Primetime? There are black belts and then there are BLACK belts (in other words, a black belt's black belt). GSP and Shields might share the same color strap holding together their gi, but Shields is a BLACK belt. GSP is not. If Shields puts the champion on his back, everyone on Team GSP will be holding its collective breath from fear because, as Danaher went on to say, Shields posses "a grappler's equivalent to a knockout punch."

Once he takes down an opponent, I firmly believe that Shields is the most effective 170-pound grappler in the sport. He does not pose the same submission threat as BJ Penn or Nick Diaz. Shields instead is a top control maestro, like Randy Couture, but with a much better ability to pass the guard during ground strikes and submission attempts. When he puts a guy on his back, the fight is going to remain there for as long as Shields wants it to.

When he passes to the mount, which is a foregone conclusion if there is more than a minute or so remaining in a round, punches are coming. Guys can either try to buck him off -- good luck. Cover up and wait for a referee stoppage. Flail an arm, which means an armbar is around the corner. Or give up their back, in which case a rear-naked choke is a virtual certainty.

Oh yes, Shields also has a sick guillotine choke, whether standing or on the ground. Arm triangles, side chokes, and other moves are certainly in his wheelhouse, but he is so good at sticking to moves that do not risk giving up top or back control that he rarely needs to resort to them.

One last thing about Shields. If someone's only exposure to Shields was his split decision win over Martin Kampmann in his UFC debut a few months ago, they really have no idea how good this guy really is. The first round of Shields-Kampmann was pretty representative of Shields. The rest of the fight was proof that the Cesar Gracie student foolishly decided to cut upwards of 20 pounds for Kampmann, rather than shedding unnecessary muscle mass gained from his year spent fighting at middleweight. The weight cut left him completely gassed only a few minutes into the action.

I do not expect cardio to be an issue on Saturday night because Shields will cut approximately half that much weight for this fight. Of course, GSP will come fully prepared as well. Both men will be fully capable of a five round war, which means this fight will be decided by which man is able to impose his will on the other. Not which guy can outlast the other in the cardio department -- something Kampmann almost did to Shields back in October.

I'm sure GSP fans think I hate the champion. Not a chance. I think he is a tremendous champion, a true role model and probably one of the most dedicated martial artists competing in the sport. And they should take great solace in the fact that I am picking Shields to win. After all, I have picked against GSP in 11 of his 18 UFC bouts.

My record during those picks is a staggering 1-10. Even the local weatherman has a better success ratio. Team GSP is probably thrilled that I am coming out this way on the fight.