The Blueprint - GSP vs. Condit 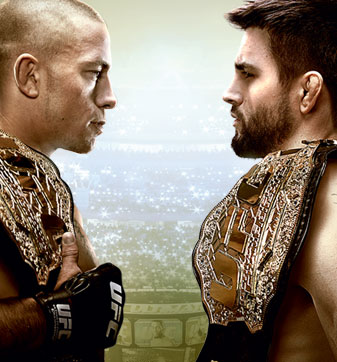 There was a time. Not that long ago. The question of the greatest in the game was up for real debate.

Both earned UFC gold in late 2006 by defeating an amazingly accomplished incumbent champion. The problem, of course, is that GSP lost the belt in his first defense, suffering a devastating knockout loss to monstrous underdog Matt Serra. And Silva began the greatest championship run in the history of the sport, successfully defending the title 10 times and counting. Not to mention the three non-title wins sprinkled among those defenses.

GSP recovered from his loss, regained his title, and embarked on a pretty incredible run in his own right. His six successful title defenses ranks second all-time. Then adversity struck again. It wasn’t an opponent who got to him this time. Instead, it was the injury bug. A torn anterior cruciate ligament sidelined GSP for more than 18 months.

During that absence from the sport, Silva erased any question as to who was the single greatest fighter in the game. He erased any doubt for everyone, except the champion 15 pounds to the south. GSP isn’t yet ready to concede the spot as the sport’s pound-for-pound king. He doesn’t have Silva’s resume. Not yet, anyway. But he has several years of youth on his side, so there is plenty of time to write his own record-book career.  After all, he is only four defenses behind the G.O.A.T.

On Saturday night, he returns to action for the first time since suffering his career-delaying injury, in an effort to reduce that gap to three. Standing across from him might be his greatest challenge ever.

Carlos Condit is a name that hardcore fans have recognized for years. He is a fighter’s fighter—a well-rounded fighter who can lead, counter and definitely finish. Only two of his 28 professional wins have lasted the distance. The other 26 are split evenly between knockouts and submissions.

Condit is the real deal. There is no doubt about that. The only question is whether he is real enough to derail the comeback of arguably the only man in the sport today who has a shot at challenging Silva’s current championship record. Other than “Jonny Bones” of course.

One word perfectly describes the game plan for each man: takedowns.

GSP desperately wants to utilize them. Condit wants to avoid them at all costs.

GSP entered the sport without a decorated amateur wrestling pedigree. Actually, he entered the sport with no amateur wrestling background whatsoever. Yet, he is the most effective mixed martial arts wrestler that the UFC has seen, as evidenced by his 77.3% takedown accuracy and 68 total successful takedowns. Both of those statistics are UFC records.

GSP’s takedowns are so effective because he is an expert at disguising takedown attempts with strikes, something that guys with exponentially better pure wrestling skills, like Josh Koscheck, fail to do. As a result, Condit won’t be able to successfully defend GSP’s takedowns. Not if the Canadian is fully healed from the knee injury.

Once on the ground, GSP is all about grinding and pounding away at an opponent. It is extremely reminiscent of Randy Couture’s style. Both men know submissions. Neither uses them much. Instead, they prefer to maintain superior positioning and pound away at an opponent without risking the position loss that could easily occur when one really pushes for a submission hold from the top position.

Condit has excellent jits, but those skills won’t be able to offset or effectively defend against GSP’s ground-and-pound attack. Nobody has had any success against GSP when he is fighting from the top position. Condit won’t be any different.

Yet, if the fight remains on the feet, then Condit’s chances of success dramatically improve. That may seem counter to conventional wisdom. After all, GSP has landed more significant strikes during UFC fights than anyone else in history. The guy knows how to land his fists, elbows, knees and shins.

Keep in mind, however, that GSP is not, by any means, a true knockout striker. Thus, he has many more opportunities to land strikes. That statistic doesn’t mean that he is the better striker than Condit. In fact, I don’t think he wants any part of Condit on the feet. Not after an 18-month layoff. Not with that kind of cage rust.

Condit really lives up to his name in the standup arena. I know that his submission wins are as numerous as his knockout wins. But this guy really does have dynamite in his strikes. He knows how to throw everything with bad intentions, if he wants to. Just watch his bout with Dan Hardy for a vivid example of what happens when someone goes toe-to-toe with Condit.

Of course, Condit also has the skills to pick apart an opponent from the outside. Nick Diaz learned that lesson the hard way when the two clashed earlier this year. Condit used constant movement, great angles, and firing first to completely neutralize Diaz, who is arguably the most effective boxer in the division, on the feet.

He will look to do the same thing against GSP. Movement and angles are a man’s best friend when trying to avoid takedowns. Condit will stick and move. He will shake and bake. He will slam and slide. Whatever you want to call it, I doubt he will plant his feet and slug away because that opens the door for GSP to take the fight to the ground. Again, that is something that Condit doesn’t want any part of.

Who will win this fight? I’m sure the betting windows will continue to dramatically favor GSP. He is the much bigger name—a household name in some regions.  But there is no way to predict how he will perform in his first bout back from such a major injury.

Will his cardio be up to snuff? Will he have an adrenalin dump early, thus struggling with his foe in the championship rounds, assuming the fight lasts that long? Will he be as explosive as he was before the injury? If not, will his takedowns be as effective? Will his timing be off due to such a long layoff from competition? Sparring is great, but nothing truly replicates a fight. And GSP hasn’t had a fight in quite some time.

All those questions and more will be on display on Saturday night. This is GSP’s opportunity to reinsert himself into the discussion for pound-for-pound supremacy. It is an opportunity, not to catch Silva, but to possibly secure a fight with the middleweight champion in what would likely be the biggest bout in the history of the sport.

Each of those scenarios requires a GSP win on Saturday night. That is much easier said than done. Condit is nobody’s sacrificial lamb. He is coming to win. And he might just be doing it at the perfect time in order to maximize his chances at scoring an upset victory.

That makes this must-see TV. I will be watching. Will you?

Tell me who you think will win and why in the comments below. I’ll be reading, as always.