The Blueprint - Franklin vs. Le 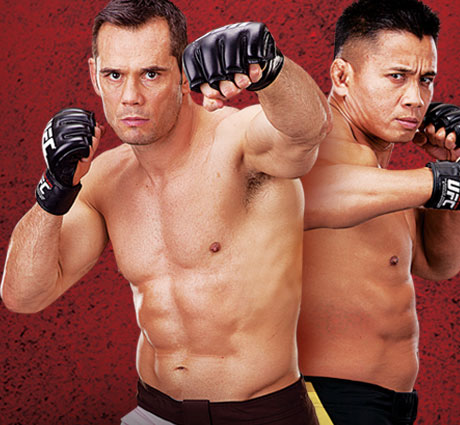 A former champion with 36 professional fights facing an opponent with just 10 bouts under his belt would ordinarily indicate that there was a sacrificial lamb at the altar. Either the former champ is so faded that he is being served up to try and build the name of his young, upstart opponent. Or the inexperienced fighter is being gifted as a keep-busy or confidence-building affair.

But Saturday’s main event in Macao isn’t an ordinary matchup, despite the mega experience gap between the combatants. Rich Franklin is indeed a former champion, but he is neither over the hill nor in need of a schedule-filler. And Cung Le is nobody’s light lunch, despite having less than one-third of the professional experience of his opponent.

Franklin is coming off one of the better efforts of the last few years of his career as he looks to make one final run at the middleweight championship. His thorough thrashing of Wanderlei Silva back in June was a masterful display of tactics. He hopes to repeat that feat against an opponent who is even more dangerous on the feet than Silva.

Le might be the scariest 10-fight opponent in the middleweight division. Prior to entering mixed martial arts, he enjoyed amazing success in two other combat sports, racking up a perfect 17-0 professional record in kickboxing and 16-0 in sanshou. Fans who spent late nights at sports bars a decade or so ago probably remember Le from those late night fights on ESPN thanks to his trademark scissor-takedown in sanshou bouts.

For both, their future is the present. Franklin is 38 years old, and Le turned 40 earlier this year. Each knows that his time in the sport is short, particularly if they want to walk away when they still present a formidable test for any opponent. Thus, a loss would be absolutely devastating for either man. An impressive win, by contrast, will serve as a heavy shot of adrenalin in the victor’s career.

For Franklin, the two biggest keys to victory are distance and unpredictability. The former champ is an extremely talented striker, one who borders on technical brilliance at times. But he is facing someone who has excelled for two decades in standup-only combat sports. Le is more explosive and more technical, particularly with his kicks, which might be the best in the sport.

That means Franklin must be mindful of the distance when he strikes. As the taller, longer fighter, Franklin can land effective shots from just outside Le’s optimal range. Good lateral movement, changing up his angles and combinations, and staying crisp with his shots are all ways to maintain the proper distance when he is striking from the outside.

If Le gets that half step in when Franklin attacks, then the former champ should counter by stepping in all the way. Despite Le’s savant-like standup, he is not the most effective guy from the clinch. Franklin, by contrast, is excellent in that position. As the taller, stronger and more technical clinch fighter, Franklin should be able to score with excellent knee strikes in the center of the cage or push his foe to the fence and give him a lesson in dirty boxing, throwing fists and slicing elbows.

But Franklin shouldn’t always look for a Thai plumb when he steps inside. He should also mix in takedowns from the clinch. In other words, he needs to stay unpredictable.

Le was an excellent amateur wrestler, and Franklin has no pre-MMA wrestling experience of note, but Franklin should still be able to get him to the ground by using throws or relying on the fence as an aid to drag him down.

There is no doubt whatsoever that Franklin has a major edge once the fight hits the ground. Le is not a jiu-jitsu guy. Franklin has one of the more underrated submission games in the division. If the two spend any significant time on the ground, I think Franklin will win by submission.

Le knows that Franklin will be looking to strike from a distance or on the inside. To counter that, he should be prepared to lead, not counter. Le is an extremely explosive athlete. He can close the distance with quick bursts, much like Vitor Belfort. That is a big key for him against a guy as well rounded and technically proficient as Franklin.

If Le can play the role of the aggressor, he will be able to stay inside of Franklin’s outside range, but still be far enough away to avoid unnecessary clinches. Bomb and bounce should be the phrase in his head. Le throws just about every strike with bad intentions. And his kicks resemble a baseball bat being wielded by a prime Barry Bonds. Thus, he should attack with ferocity, but make sure to bounce out of the pocket before Franklin can step all the way inside.

The other option is to counter Franklin by stepping into his strikes. That is dangerous because Franklin isn’t a cream puff in the power department by any stretch of the imagination. He also happens to have an incredibly sneaky left high kick, a strike he rarely relies on, but one that can change the course of a fight in an instant.

Le knows that, too.  It would be shocking to see him walk into a high kick, but stranger things have happened inside the cage. He needs to be aggressive, but still respectful of Franklin’s striking.

At the end of the day, however, Le knows that he probably needs to score a knockout if he wants to win the fight. It is tough to imagine him outpointing Franklin. “Ace” is the better all-around fighter. Plus, Le is a killer in the standup world. Seven of his eight professional wins have come by knockout. He is always in search of a knockout, and Franklin has been susceptible to bombers in the past, suffering more than half of his career losses by knockout and having to survive many more moments of being severely hurt by a punch in bouts that he ultimately won.

If Le can land one of his big kicks to the liver or head, Franklin could be in a world of trouble. Similarly, if he is able to get into his comfort range and fire off a couple of big punches, Le could find himself on his way to a knockout victory.

But Franklin can stick and move with him all day, every day. I truly believe that. If this bout lasts the distance, he holds a big edge.

Who is going to win? Franklin is the rightful favorite. He has more ways to win because he has more skills to rely upon, whether in good times or bad. But Le is an extremely game opponent, one who can turn out the lights in the blink of an eye. That makes for great TV.